Recovered from the 3-3 thriller against Watford last week? Good, because this Saturday it's yet another toughie against unbeaten Blackpool. The Royals still haven't lost either though - and both teams will be around the top six come May. Big games every week in the Championship...

Five points from three games, it's around the tally you would have taken before the season started after seeing those fixtures. Most importantly we've looked like winning all three games, and would have done had it not been for Watford's supersub Italian international Fabbrini picking up a deflection to slot past Alex McCarthy. Slightly worrying is the fact that Reading only seem to be able to play a good 45 minutes - and no clean sheets yet.

Only a Marvin Emnes stoppage-time goal prevented Blackpool from recording a perfect 3 out of 3 last weekend, although the game wasn't a classic, with Chris Basham only putting the Tangerines in front late on. In fact, it's been the late late show in all Blackpool games - their winner at Barnsley was an own goal in injury time, whilst they scored two in the last two minutes against Doncaster to secure victory.

Let's get the big stat out the way first. Reading have never beaten Blackpool away in the second tier of English football. Admittedly we've only had three tries in recent years (we met the Seasiders for four seasons from 1926 to 1930 in the old Second Division), but it's six losses and a draw in those seven matches. The three most recent ones have come in the last six years in the Championship, and most recently a 1-0 loss at Bloomfield Road in 2011, where Callum McManaman grabbed the only goal of the game.

Still, just wait for the home leg, where I'll reveal (again) that Blackpool haven't won in Berkshire since 1979!

Whilst the 4-4-2 diamond formation bore fruit for the first half against Watford, it equally showed its drawbacks in the second 45, as Reading struggled to get a hold of the game and eventually threw away a two goal lead. Nigel Adkins might be tempted to revert to a 4-5-1 for a tough away trip, as we saw at Bolton. Especially with the dangerous Tom Ince returning on the flank for Blackpool.

Adkins is starting to get a feel for his best side, and so it should only be injury and suspension which force major changes on the team selection. Jimmy Kebe could be a surprise selection on the Reading bench, and you'd think that even hearing the great man's name amongst the substitutes would excite the Reading support.

So an unchanged back five, and I'd be tempted to revert to the midfield which started the game at the Reebok Stadium. Garath McCleary back in, which means that one of Adam Le Fondre and Nick Blackman drops out. As harsh as it is on Alfie, whose thunderbolt to open the scoring was top-notch, I think Blackman provides the better option in terms of holding the ball up and bringing others into play. 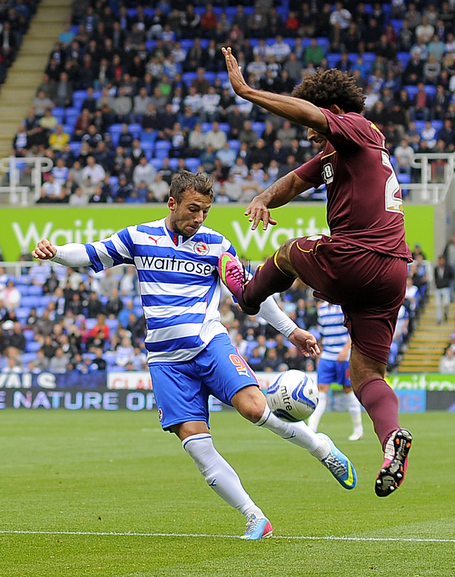 As mentioned, Premier League-coveted Tom Ince should return after suspension for the Seasiders, although if a bid comes in in the next couple of days for the England U21 winger, he might sit out. Otherwise, Blackpool's starting XI has been pretty similar throughout their League games.

David "not Howard" Webb will be responsible for ensuring that both teams have not snuck 12 players onto the pitch before kick-off. We last encountered Mr Webb in 2011, as Nottm Forest won 1-0 at the City Ground in the Championship. Meanwhile Blackpool have had the pleasure of his company three times in that period - and won all three.

Whilst I want this to be the game where everything finally comes together and we run out convincing 3-0 winners, I don't think it'll be just yet at Bloomfield Road. Blackpool are a dangerous side and the return of Tom Ince can only help their cause. Both teams will be happy to keep their unbeaten records intact, and I can see there being goals again. 2-2 is the shout from me, with a customary late Blackpool equaliser - though we do need to turn these draws into wins soon...