It was a rough ride, but the Royals fans who enjoyed the sunshine at the Madejski Stadium today were treated to the Royals' first opening day win since 2006. Former midfielder Jay Tabb netted for the Tractorboys, and could have had a couple more, but a bundled goal from Adam Le Fondre and a sublime 30-yarder from Danny Guthrie sealed the perfect start.

Those who wanted to see the Royals pass the ball around and create patient openings were treated to exactly that in the first fifteen minutes, as Reading remained calm in possession and probed at the Ipswich back line without troubling them too much. Royston Drenthe was the name on every fan's lips, and he showed what he could do early doors with some devilish crosses which ultimately found nobody. The Royals had a great chance to open the account from a corner but Garath McCleary handballed at the far post.

The critics of the new style argue that it's not penetrative enough, and it soon proved to be the case as Ipswich neutralized the Reading threat and started to build chances of their own. Jay Tabb, facing his former side of over four years, nearly opened the scoring but was crowded out at the near post from a David McGoldrick cross.

Eventually, Murphy's Law would prevail, as Tabby netted on his return to the Mad Stad after not scoring once in a Royals shirt. A deep cross caught out Chris Gunter as Tabb was left alone to side-foot a shot towards goal. McCarthy got down well to save the first chance, but Tabb fired home the rebound. His celebration was unadulterated, until he perhaps realised where he was... 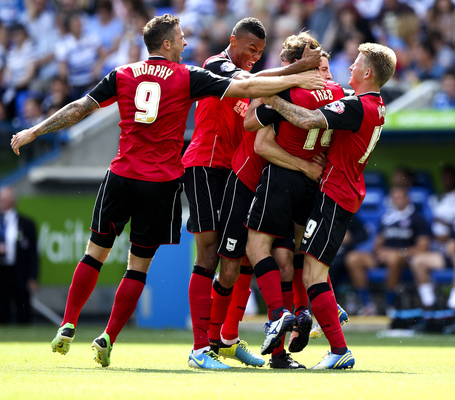 Naturally, that goal would grow to frustrate the Royals fans, who were seeing their team give the ball away or simply pass it backwards without taking chances. The front four were becoming increasingly isolated up top, as Guthrie tried to release the wingers in behind the stout Ipswich back four. The one time Guthrie did succeed, it was to Gunter bombing forward from right-back, but his square across the six-yard box found no-one.

It would take luck to get Reading back into the game, and that's exactly what happened. Drenthe powered a corner in from the right wing which evaded everybody. McCleary was alert, though, and collected from wide out before floating the ball back across goal. A pile of players including Adam Le Fondre and Sean Morrison managed to bundle home - ALF would get the goal after a half-time correction. There was time for McCleary to fire in left-footed to remind Nigel Adkins why he'd been picked, but the teams went in level at the break.

In the second half, the play was focussed more down Reading's left wing, and it proved fruitful early on as McCleary's pace troubled the Ipswich right-back into a yellow card. Twice the Jamaican winger got in behind the defence - unfortunately, nothing came of their well worked moves.

It could have been so different, though. Ipswich were reminding Reading of just how quickly and easily goals can be scored via more direct means. A long ball forward was nodded on towards that man Tabb again - his volley from 18 yards went inches wide of McCarthy's left-hand post.

Eventually, the front four of Reading clicked, as some absolutely sublime play saw the Royals fans purring at the skill and intricacy on display. Drenthe played a one-two with McCleary, and the Jamaican's return back-heel saw Drenthe in on goal. He squared to Hal Robson-Kanu, whose backheel dribbled agonisingly wide of the post. Then Guthrie, who had begun to run the show from his "pivot" position, produced a deep cross which McCleary nodded back across goal. Robson-Kanu was there, but couldn't get the ball down. 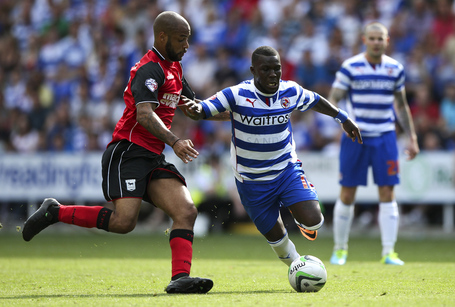 The topsy-turvy game continued as Ipswich tried to break against the waves of attacks Reading were producing. Gunter was caught out of position up field and Murphy broke down the left wing, crossing to McGoldrick who just couldn't stretch far enough. Tabb found himself in some space two minutes later, and squared for the striker to fire in a shot which McCarthy was equal to.

Drenthe was coming into the game more and more, and a deep McCleary cross found the former Real Madrid winger. He powered a shot straight at Loach, then from the resulting throw-in he had another go, but the Ipswich keeper again blocked the path.

And for all the neat passing, it was a hopeful strike which broke the stalemate. Danny Guthrie found the ball dropping at his feet 30 yards out, and fired in a hopeful lofted strike. It took a deflection from the defender charging him down - enough to wrong-foot Loach, who saw the ball sail over him and into the net. Delirium at the Madejski, and finally the Royals were ahead. 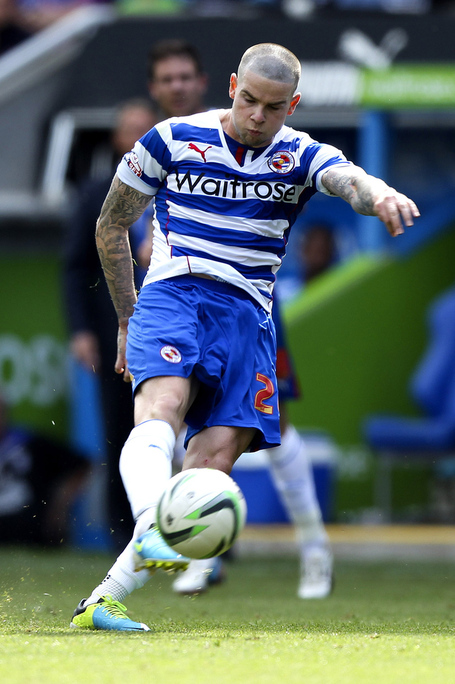 Reading controlled the remaining ten minutes, although Ipswich might have nicked a draw in the six minutes of injury time allotted by the referee. A long throw was flicked on by Frank Nouble, and Paul Anderson met it with a header of his own - but McCarthy was again in the way to comfortably save.

The final whistle, the banana-skin avoided, three points, the perfect start. It's a long season ahead, but there were enough signs to encourage the Reading support that this style of football might become the new Reading way.