Reading picked up a vital three points with a 1-0 win at Yeovil courtesy of Adam Le Fondre's late penalty but in truth this was a game that Nigel Adkins side can consider themselves very fortunate to have won. We look back on an enjoyable but at times frustrating day at Huish Park.

First things first and this game was all about the three points no matter what you thought of the way we earned them.

After squandering a two goal lead against Watford, losing at Blackpool and then getting demolished at Peterborough, the last thing Reading needed was to head into deadline day and a two week break on the back of another disappointing result. So in that respect, job done.

However in just about every other area it was once again a disappointing afternoon for the Royals and Nigel Adkins will have some serious work to do if he's to get that side anywhere near top spot come May.

One area that certainly wasn't disappointing was the tremendously friendly atmosphere and hospitality afforded by Yeovil. Friendly talkative stewards, and parking right by the ground for just £2 were notable highlights from an away day that I'm sure was enjoyed by the vast majority of the 2,000 or so travelling fans. Such small parking charges puts to shame our own club where we have to pay the best part of a tenner to park around the Madejski Stadium despite receiving around £15m+ in parachute payments. Even leaving the ground the parking attendants were going up to most of the cars repeatedly apologising for the delays leaving the ground which were apparently caused by an accident down the road, it's the little things like that which just gives you the feel good factor but anyway I digress.....

Going into this game and unsurprisingly there were wholesale changes from the side that were humiliated at Peterborough in midweek. Most of the side who started at Blackpool were restored but injuries to skipper Jobi McAnuff and left-back Wayne Bridge meant that Shaun Cummings and Garath McCleary both earned starts, while Adam Le Fondre also got the nod to take his place in the starting eleven alongside Nick Blackman.

Yeovil meanwhile were without chief dangerman Paddy Madden and went into the game having not scored a league goal at home in their previous two attempts, with both of those games also ending in defeat.

If you'd plonked a stranger down and asked which team had been in the Premier League last year and which had sneaked their way out of League One in the play-offs, I think you'd find the vast majority picking Yeovil as the former top flight side because quite frankly they dominated the first half that made a mockery of the pre-game reputations.

Reading were sluggish throughout, frequently caught in possession and very rarely tested Yeovil's keeper Wayne Hennessey. The hosts meanwhile were a constant menace, with only two excellent saves from Alex McCarthy and a glut of long-range efforts missing the mark, keeping Yeovil from scoring that elusive first home league goal.

For whatever reason, Reading just seemed incapable of stringing a decent move together. All too often the end result was a long ball in the air to Le Fondre or Blackman, with neither able to win much against the much taller and stronger centre backs from Yeovil, Dan Seabourne and Byron Webster. In many ways you had to feel sorry for Reading's front pair, who worked extremely hard and went up for every ball available but were just battling well against the odds each and every time.

Balls on the deck were about as rare as Kaspars Gorkss winning a 100m race and Reading's midfield and full-backs were doing little to help things, with Jem Karacan guilty of wasting possession and Royston Drenthe looking particularly uninterested and ineffective for large periods.

When Drenthe did get the ball he was causing a few problems but by and large this was a display that made you question whether Royston is actually a player we can carry when there's so little creativity behind him and a general ineffective front-line ahead of him.

With Reading getting swamped through the middle Nigel Adkins made a bold move, sacrificing the pretty lively Garath McCleary for Danny Williams with 10 minutes left in the first half. McCleary can consider himself a bit unfortunate, having nearly scored with one of our rare efforts on goal, but Williams certainly helped tighten things up and the US international could also have opened the scoring late on in the first period, only to see his volley scream over the bar.

Into the second half and again Yeovil kept coming at Reading. Only a great tackle from Alex Pearce combined with a touch from Alex McCarthy prevented Andy Williams from scoring and two or three other efforts only just flashed passed McCarthy's upright as Reading looked increasingly shaky.

With 25 minutes to go Adkins rang the changes again and the ineffective Blackman was taken off for Robson-Kanu who like Williams immediately seemed to make the difference, playing some neat through balls that tested the Yeovil defence.

Le Fondre was constantly chasing down lost causes throughout the afternoon but his hard work paid off when 14 minutes from time his chase into the corner forced the Yeovil full-back into an error and after he slipped over, Alfie drove into the box along the byline only to be checked by Luke Ayling. Referee Trevor Kettle awarded a penalty much to the anger of the home fans and Le Fondre stepped up to give Reading the lead.

Having watched the penalty again I couldn't tell you 100% if it was a penalty but Ayling put himself between Le Fondre and the ball and if you do that inside the area you're always at risk of giving away a penalty. Much like with Guthrie's against Watford it may not have been the most horrible foul you've ever seen but there looked like contact and if you give the referee a chance you can't feel too hard done by.

From there Reading generally kept their cool, with Hope Akpan introduced for Drenthe to give a little bit more solidity to the midfield. Danny Williams could have made it 2-0 but sent his shot from the edge of the area tamely into the arms of Hennessey and while there may have been a couple of nervy moments inside Reading's own area, they handled the pressure well and secured a very important three points.

I'll save comments on individuals for the player ratings which you can read here but I'm sure Nigel Adkins would be the first to admit that his team didn't play well this afternoon and Yeovil can feel themselves quite unlucky to have come away empty handed. However, that's what happens when you don't take your chances and after Reading walked away empty handed in similar circumstances at Blackpool last weekend, you can't begrudge them the rub of the green this afternoon.

Long-term though, this performance shouldn't cover the cracks of a team that needs a lot of work if it wants to win the division. There's still pitifully little being created through the middle of the park and all too often Reading's players are still going for the panic hoof or playing the ball into the corners rather than taking the time to make an extra pass or play it along the deck.

While some will criticise Adkins for getting his starting tactics wrong, credit to him for having the guts to make a change so early, especially when he took off a player who was putting in a half decent performance.

Today's performance showed the flaws in the Adkins project but when you look at the fact that all but Drenthe were signed by former managers, msotly by and for a Brian McDermott side, you can appreciate the fact that they are not going to become a neat passing side overnight. With that in mind it's slightly frustrating to hear Reading fans shouting and bemoaning every time a player makes a backwards pass, yet five seconds later groan when the inevitable long ball fails to find feet. You can't always have it both ways, sometimes you need patience if you want good football and I just hope that Reading fans have the patience to put up with these growing pains, otherwise we'll end up with Brendan Rodgers Era  v2.0. 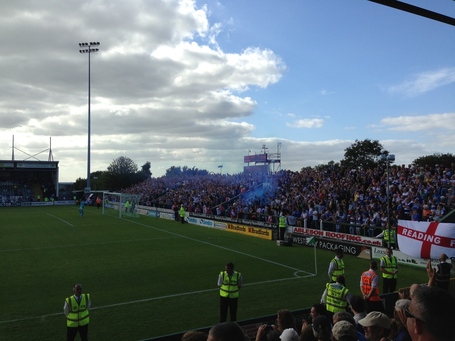 Again I'm not suggesting we have to sit there and enjoy poor performances but patience will hopefully earn greater rewards in the long term.

Adkins has already admitted he's looking to add quality to the squad and he'll need that quality because the way the team is now, it's not going to get up to scratch fast enough to compete at the very top of a strong Championship this season.

At the end of the day we've come away with three points and now have a few days to regroup and add a couple of players before two winnable home games in the space of four days against Brighton and Leeds. Eight points from 15 isn't amazing but it's still a half decent start and with a first clean sheet of the season it gives us a nice feeling to go into the international break with. Ultimately we're all going to feel better over the next few days because we've won playing badly, rather than the still rotten feeling of losing despite playing well.

Performances are great but ladies and gentlemen at the end of the day it's points that win prizes.