View From The Town End: Brighton

The Seagulls come to town this weekend for a match that's already being described as "on this Sunday". As is tradition, we like to hear from the opposition fans - Stefan from TSLR joins us to give the Brighton perspective.

Share All sharing options for: View From The Town End: Brighton

It’s been an odd one really, a positive first result was followed by some performances at home that ultimately fell below our expectations at Falmer. Since then it’s been better. Supporters this season appear to be suffering from bi-polar episodes: the minute after we play a few nice passes and Ulloa scores, we’re convinced we’re bound to win the league. A calamitous bit of defending later, and we’re all wondering how we’ll stay up. In the new issue of the fanzine – TSLR051 – for sale at your place for the first time this Sunday, one contributor puts it down to the weather still being warm – if that’s the case, we might all turn up in a cloud of positivity come Sunday.

Six months ago Gus Poyet was leading Brighton into the play-offs and being praised by many for sticking with Brighton in the face of interest from Reading. Since then Poyet has been dispatched with and things aren't looking so great in the Championship table for the club, what went wrong and what have you made of events of the past few months? 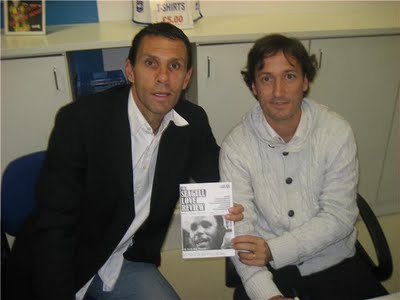 It’s a long story… What went wrong? is indeed the question. The club has since said that Gus got the hump in March and relations deteriorated from then on, which would fit with when the Reading job was available. As a fanzine, we’ve heard more rumours this summer than in the previous five seasons of TSLR’s existence. About 1.72% of them are true as well. Personally (and this isn’t necessarily the view of TSLR), our £8m losses a year that we need to curtail in order to get in line with FFP probably put paid to Poyet.

You only have to look at our spending pre / post Poyet to see that he loved to splash the cash compared to our new king, Oscar ‘London Fashion Show’ Garcia. Some ‘insiders’ claim that staff were tasked with digging out breaches of contract so we could sack Gus without the need to pay him off. Add that to Gus’ increasing animosity towards the Albion for not letting him explore top flight opportunities, and the proverbial was always going to hit the fan, never mind the pre-play-off match away dressing room floor.

What are your best memories of Reading v Brighton?

Reading v Brighton has been a pretty uneventful fixture over the years. Judging by the historic results, our 4-0 demolition of you in January 1924 or our 8-3 (EIGHT) demolition of you in April 1957 must be up there. In 1963 we beat you 5-4 away but you won’t be surprised to know that I didn’t make any of those games. Remarkably, my favourite Albion / Reading match up was the 0-0 at the Madejski in 2002 when we stormed your boys for the title. We didn’t win that day, but only because of a terrifying decision to disallow Gary Hart’s goal in injury time. We spanked you at home just before and the point effectively sealed the Division 3 title. Plus we got one over on Pardew who, as you know, played for for C*****l P****e in the late 1980s.

Actually I was just planning on penning a blog concerning our last visit, two seasons ago. You beat us 5-1 in December 2005 but our 3-0 loss at yours on Boxing Day 2011 was pretty horrendous. It came during our difficult period that season; it was blooming cold; I couldn’t drink due to driving up as a result of Bank Holiday public transport; and our performance was what the word ‘abject’ was invented for. It would have been worse had it not been for doing exactly the same at a relegation-bound Coventry five days later, on New Year’s Eve.

Who should Reading fans be worried about on Sunday? 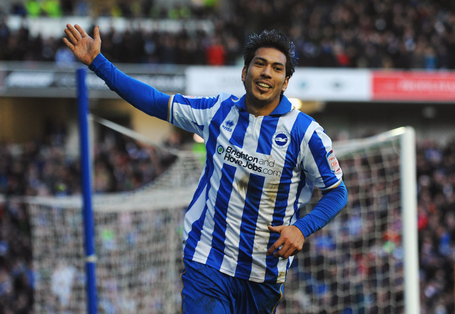 Who’s that man from Argentina? Leonardo Ulloa, of course. The striker is lethal with his head and, after nine or so months on the south coast, the rest of the team now know to stick the ball on his head in the box and he’ll find the corner. Plenty of rumours circulating about the amount of impressed Brighton ladies he hooked up with (thanks, in part, to his translator) over the summer too, despite his wife being in Spain. But we shouldn’t promote what are certainly only rumours as a broken home can lead to a loss in form. Usually here we’d mention Liam Bridcutt but he’s still having hernia issues. Ashley Barnes will try and fight your team – he tripped up a referee last season.

Anyone that Brighton fans are concerned with?

Glenn Murray aside, it’s always a shame to see players injured but I can’t help but think Wayne Bridge would have shown us what we’re missing. Second leg play-off game last season aside, he showed undoubted class all year. Jobi McAnuff destroyed us two seasons ago; Adam Le Fondre loved scoring last season on MOTD; and Jason Roberts always makes me concerned. But what are we most concerned about? The amount of tripe Nigel Adkins will serve up about us whatever the performance in his post-match comments.

With you being better* than us, almost unaffected by FFP due to your excessive parachute payments and with our match away at QPR the following Wednesday, we’ll be well happy with a point. 1-1?

*from a higher division

Thanks to Stefan and you can check out more of their writing here, as well as their Twitter, Facebook, and online shop.