The Royals' first time on the telly this season back in the Championship and we welcome Brighton and Hove Albion to the Mad Stad. Average starts for both sides so far - but these competitive matches week-in week-out are exactly what Reading fans love about the Championship.

After one of the more depressing weeks in recent Royals history, it was good to get three points and a clean sheet on the board at Yeovil - even if that winning goal was a penalty. Still, the home record is solid enough, with a good win against Ipswich followed up with a draw with Watford which probably should have been all three points. Results at the Mad Stad will be all-important this season - Fortress Madejski needs to return, and soon.

Having talked about that clean sheet, it's interesting to see that Brighton have scored in every single game so far, so don't expect that first home shutout too much! Three unbeaten for the Seagulls including inflicting Burnley's only defeat of the campaign so far - but their two away games so far have shown inconsistency.

We haven't met Brighton too often in the League in recent years, but the last time was our successful promotion campaign in 2011/12, where a 3-0 home win was coupled with Ian Harte's free-kick for a 1-0 smash-and-grab at the Amex.

In fact, the Royals have won all of the last six meetings between the sides, recording doubles in 2004/5 and 2005/6 - the overall score of those matches is 15-3 to Reading.

Royals fans will no doubt be clambering to see the deadline day signings pull on a Royals shirt for the first time. Sadly, 17-year-old Estonian striker Bogdan Vastsuk is unlikely to feature, meaning that we're "stuck" with the same squad as went up to Yeovil, minus Adrian Mariappa and Jimmy Kebe who have both departed for Crystal Palace.

For me, this is a very intriguing squad selection for Nigel Adkins, because now there's simply no excuse for a few players not to give their all. I'm mainly looking at Pavel Pogrebnyak here - with the news that Jason Roberts has suffered another setback in his return from injury, and question marks over Nick Blackman and Adam Le Fondre leading the line, we could really do with Pav making an effort. And 4-4-2, or the diamond, or 4-5-1, or 4-2-3-1? Questions, questions... 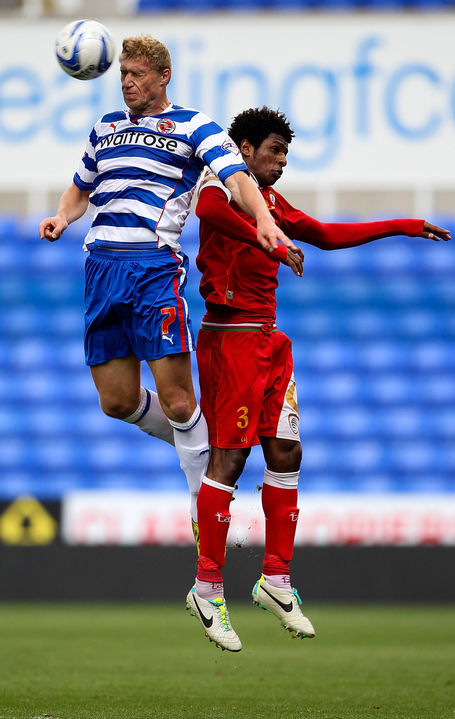 What an action shot - yep, he won a header (Ben Hoskins/Getty Images)

A couple of other notes - Wayne Bridge returned to training this week after injury, but with three games in seven days, it's an interesting dilemma for Adkins as to when he decides to bring the ex-Seagulls left-back in. Stephen Kelly could return, or Shaun Cummings might cover in his place.

And whilst the match against Oman was a pretty dire affair, Jordan Obita was mightily impressive and could feature at least off the bench - sadly for him, the wing is one of the strongest departments at the club at the moment, with Drenthe, McAnuff, Robson-Kanu and McCleary ahead of him.

Brighton brought in Craig Conway on loan from Cardiff City this week and he's likely to go straight into the squad, with a fair few injuries hitting the Seagulls squad. Andrea Orlandi, Liam Bridcutt, Craig Mackail-Smith and Will Hoskins will all miss out.

Graham "not Keith" Scott is the man in charge of pressing a buzzer five minutes before kickoff to summon the teams into the tunnel - wouldn't a knock on the door suffice? He's had two matches so far this season, and has shown 8 yellows and 1 red - that sending-off coming for Wigan against Bournemouth. He reffed Brighton twice last season, and both were Seagulls victories (including a 2-1, 3-red-card victory at Leeds). We last met Scott in January 2012, as we lost 1-0 at home to Hull before that incredible Championship-winning run.

Don't you just love the Championship? Yet another tough game to decide on, but I've somehow found the optimist in me and I reckon we can grab the win after a rather depressing month or so. I think it'll be a frequent occurence that we see goals at the Mad Stad this year, and I'm gonna plump for a 3-1 home win.