You can tell it's a slow news week... Yup, EA Sports have released the FIFA 2014 ratings for every Reading player in their "Ultimate Team" game mode. Sadly no Berkshire Blues this year in Pro Evolution Soccer after our one-year foray into the Premier League, but let's have a look at how EA have graded our players...

(All photos, stats and badges are, of course, copyright of EA Sports/FIFA series, and were obtained from Futhead.com) 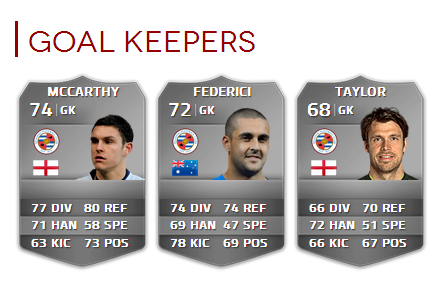 No surprise really that Alex McCarthy comes out top, but he's only the joint 5th best 'keeper in the Championship, with Julio Cesar (82) & Robert Green (76) of QPR, and Wigan's Ali Al-Habsi (78) & Scott Carson (75) ahead of him. Tomas Kuszczak and Kaspar Schmeichel are rated on a par with our England call-up. But on that note, Federici is the 3rd best "second" goalkeeper in the League. 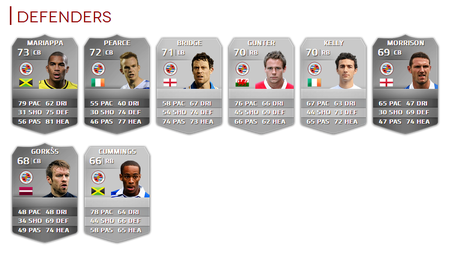 The area of most concern for "real-life" Reading fans, and players on the game will be equally frustrated. Adrian Mariappa of course is no longer at the club, leaving three centre-backs with very little pace. Add in Wayne Bridge's slow speed stat and you'll probably be playing a very deep defensive line...

If you're wondering who the best defenders in the Champo are according to FIFA, Nedum Onuoha (QPR) and Ivan Ramis (Wigan, both 75) share that accolade. Adrian Mariappa was the joint-4th best CB in the League before his departure - but Wayne Bridge is the joint-best LB, and Chris Gunter & Stephen Kelly share the joint 4th-best RB overall rating. 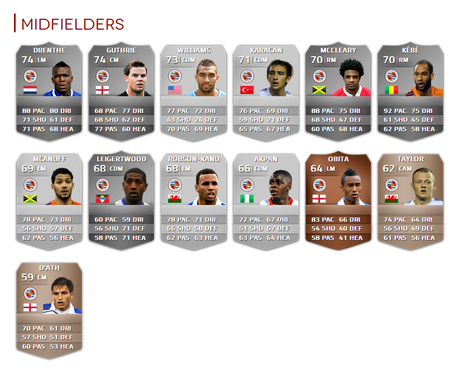 Some encouragement for Royals fans as with Royston Drenthe and Danny Guthrie, Reading boast two of the joint-4th best midfielders in the League. Junior Hoilett (QPR) is some way clear on 77, with Rangers' Joey Barton and Wigan's Shaun Maloney both on 75. And if pace is your game, you'll be pleased to see that Drenthe, Garath McCleary and Jordan Obita all clear 80 (sadly, the 90+ Jimmy Kebe has also joined the Palace exodus).

The only slight disappointment for me is Hal Robson-Kanu's rating, and possibly even Jobi McAnuff, who could both be on a par with McCleary - but overall those ratings seem alright.

Someone out there really doesn't like Pavel Pogrebnyak! If you're playing as Reading, it looks as though the main priority will be a striker - and let's hope you have more success than Nick Hammond, eh? Adam Le Fondre comes out as the joint-5th best striker in the division, behind Bobby Zamora (75), Andy Johnson, Grant Holt and Tom Ince (all 74).

As I already said, dropping Pogrebnyak to just 68, behind Jason Roberts, and the same as Darius Henderson, seems particularly harsh. The strength in depth of the Royals' front-line is really exposed here, especially if you like to play old-school with two up top.

Well, what do you think? Should Alex McCarthy be higher than Scott Carson? Is Pavel Pogrebnyak really on a par with Darius Henderson? Which position's gonna be your first buy if you aim to guide the Royals to the League title? Sound off below...