So with no new signings it's time to take a look at how Nigel Adkins might line his team up for the new season. Our newest contributor Max Ashley takes a look ahead to what Nigel may decide to do.

Share All sharing options for: A Case For Reading To Play 4-2-3-1

As a former player and professional football coach I've always believed in two formations. The first one is the standard 4-4-2 as it has balance all over the pitch, though the downside is that it can sometimes leave you high and dry in the centre of the park.

My personal favourite would be the 4-2-3-1 as this gives you great attacking options going forward while still leaving enough players behind the ball to stop the opposition counter attacking. Here's my choice injuries aside. 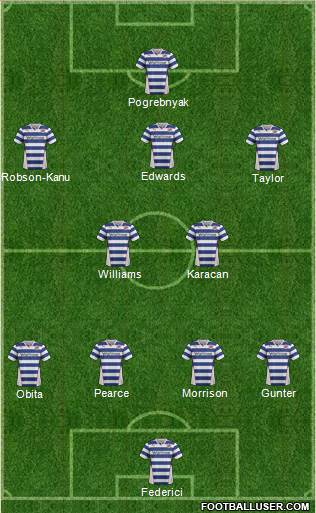 He's a great goalkeeper that provides us with excellent distribution to get the ball to our forward players to launch a counter attack. He is very comfortable receiving the ball and playing our from the back.

Both very athletic footballers who provide speed and strength going forward while not forgetting their defensive duties.

They both win every ball that gets out forward to them, and it's a partnership that looks like ti could work well.

If fit these two will be the heartbeat of the Reading team. Everything will go through them, as both are good footballers who excel in putting in a good shift.

I get the feeling that this will be his breakthrough season just asObita had last year. He has looked good so far in the games he has featured in. Very energetic at getting forward and tries to get in great positions. I think he will score a few as well.

What a fantastic player this man is. He's been out on loan for a year so feels just like a new signing. Very classy on the ball, he's got great speed and balance to beat defenders, great passing technique and will score a few this season.

Hasn't had to much luck at Reading over the years, however I think he is rejuvenated and could surprise a lot of us. He will either feature behind Pogrebnyak or out wide.

Has had a great start to pre-season and I think he'll cope fine upfront on his own with the likes of Edwards and Taylor behind him. Feel this could be a prolific year for the striker and I'm backing him for 20 goals.

So do you agree with Max or woud you try something different? Let us know your views below