The 3-0 scoreline suggests an emphatic victory of Felix Magath's Fulham but what do the stats tell us?

64% possession, 618 passes with an 89% pass success rate. Saturday’s win would seem to be evidence that are finally starting to successfully play the Nigel Adkins passing game. Yet ’s defeat to was a prime example of how accumulating successful passes does not guarantee victory. That night’s passing display was almost identical to the Fulham game: 66% possession, 618 passes with an 81% pass success rate. Crucially on Saturday did not gift the opposition two goals and Matt Smith’s dismissal all but ended Fulham as an attacking threat.

The other difference with the game was Oliver Norwood. In the first half against the Terriers both Hope Akpan and Jordan Obita tried to take on the role of playmaker. Two players doing the job of one meant ’s central midfield were too deep and surrendered the centre of the park to their opponents. This made it difficult for to bring their strikers into the game shown by how few passes Simon Cox made in central areas in ’s half.

In the first half that night Akpan and Obita passed the ball from Reading’s half over 50 times. By contrast in the whole game on Saturday ’s central midfield partnership of Akpan and passed the ball 72 times from ’s half. ’s range of passing meant he dictated the tempo for . His passing statistics must rate as one of the best ever achieved by a Royals player at the Madejski Stadium: 106 passes with a success rate of 92%. Decisively this included 15 accurate long balls allowing to change the tempo and direction of play. 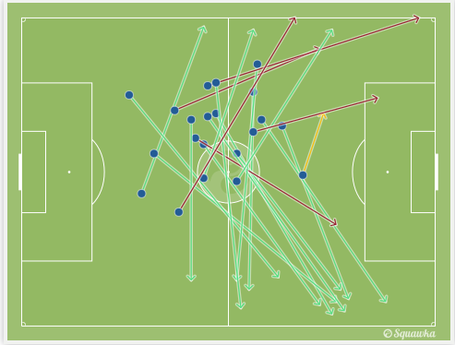 ’s ambition and authority meant Akpan had a much lesser role in ’s building from the back. Instead he was able to get further forward with Norwood looking to pick the ball off Reading’s centre backs. He still passed mostly sideways but unlike the game this was done mostly in the opposition’s half. This provided a nice balance to and showed were getting on the ball in dangerous areas. 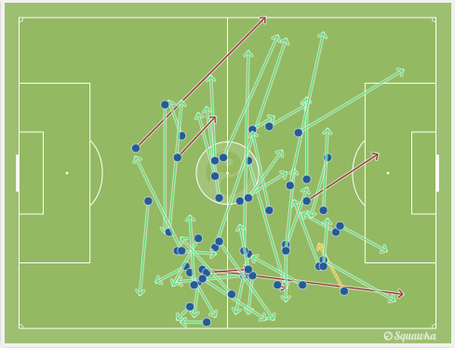 The player most often on the receiving end of ’s Hollywood balls was Jamie Mackie but the biggest benefactor of this much improved passing display was Simon Cox. As his passing graphics show, he was far more involved in ’s build up play against Fulham than he was against . Cox’s 49 touches was by far the most he’s seen of the ball this season and he was highly effective, creating more chances from open play than any other player. His ability to drop deep and play the number 10 role was best illustrated with the pass which led to Nick Blackman’s goal. 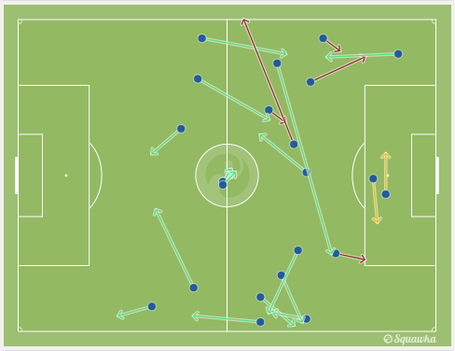 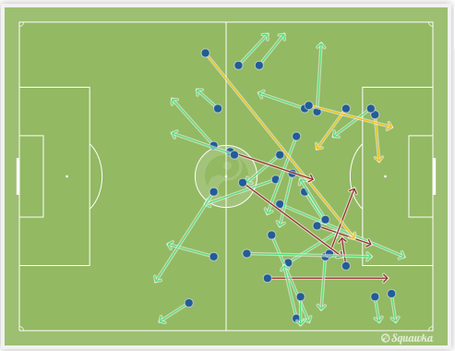 Despite the optimistic performance will know that they are highly unlikely to come up again against such feeble opponents as Fulham. Just 6 shots and 1 on target show how little threat they offered. Only 19% of the game took place in ’s third of the pitch as they eased to a comfortable victory. The last time came close to such territorial dominance was in the woeful performance against Yeovil. In that game Reading enjoyed the same percentage of possession as they did versus Fulham but attempted 64 crosses. On Saturday only 26 crosses were attempted and only 4 of those were by ’s wide men Jamie Mackie and Jake Taylor. This continued the trend this season of Reading reducing the number of crosses they attempt.

Last season it was common for over 5% of Reading’s passes to be crosses. This season the average is just 4%.  It might only be a small difference but it is perhaps evidence of a more deliberate style of play. In the past Reading’s attacking play has been far too often dependent on counter attacking and hopeful crossing. Against Fulham Reading’s counter attacking play was still prominent but the team were also able to control the possession and territory through patient passing. Such an approach will have greater tests than Fulham but on Saturday Reading were able to dominate and control a game something they rarely managed last season.