Every player has a role. Some can play that final killer ball. Others use their pace and trickery to bamboozle defenders. Some might have a pop from 25 yards occasionally. But some have to do the hard graft and don't get the praise they deserve.

Hope Akpan is just the latest player to fall into that category of being underappreciated by the Royals support simply because he isn't spectacular or exciting. But at the moment, with the injuries still especially prevalent in the central midfield zone, he is the best defensive midfield option in the Reading squad.

But it seems that Reading fans must always have those players to pick on; who always get a rough time until they're made to eat their words. In the last couple of seasons it's been Akpan and Nick Blackman - both woefully out of their depth plunged from League One into the Premier League under Brian McDermott, but who performed their rather limited jobs well enough last season; in the case of Akpan, 17 League starts and 12 appearances from the bench. Akpan was behind Danny Guthrie, Danny Williams and Jem Karacan in the pecking order last season, and that's where you see that things have changed. Guthrie has just returned from injury (though was less than impressive on Sunday afternoon), whilst Williams and Karacan have a while to go yet before they return to the side. The emergence of Aaron Kuhl and the arrival of Oliver Norwood have given Nigel Adkins more options, but their styles are extremely similar to one another (and indeed Guthrie). So for now, Royals fans might have to grin and bear their frustrations.

And before Akpan and Blackman felt the vitriol of the Reading voice... Remember Mikele Leigertwood? A player, like Akpan, who looked sluggish and ungainly, yet quietly went about his business in the midfield with Jem Karacan. Most will remember him for that goal at home to Nottingham Forest and the jubilation that followed. Some won't remember that the Royals finished with the best defensive record in the Championship that season. Despite all his shortcomings, he had two jobs. Tackle and get rid. Less than glamorous, and he won't feature on any Soccer AM skill videos, but that was his job. Ironic, then, that this is the image most Reading fans will think of during that second Premier promotion campaign. 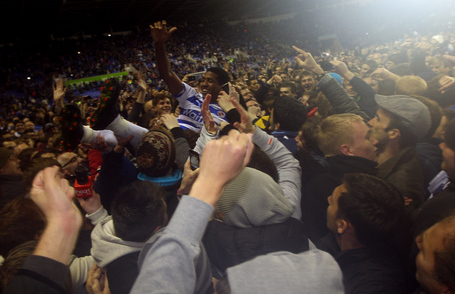 I'm not saying that that Mikele Leigertwood is a Reading legend, nor does he deserve to somehow be upgraded in the memories of Reading fans, but the job he did was unheralded and went without celebration. Sure, he wasn't good enough in the Premier League, but then the entire team was exposed in that disastrous season. And I bet at least a few people thought, when he came out to host the Golden Gamble at half-time earlier in this campaign, that a fit Leigertwood could at least "do a job" in this current situation. Because after all, each player has only to "do a job": the job they're asked to do; the job they're capable of.

Let's assess the half-time situation at home to Wolves then. One-nil up, looking relatively comfortable. Hope Akpan has completed 86% of his passes according to Squawka, a statistics website, had one shot (a tough volley on his weaker foot) and made one interception. Watch his game closer, and it's not the interceptions he's there for - it's the pressing, the harrying, the protection of the back four before the ball can get into the final third. It's not the glamour passes he's there for - just two of his 21 attempted passes were classified as long-balls, with the rest being simple short deliveries to someone else.

Danny Guthrie gets called in to the changing room at half-time - he's coming on for the second half then? But for who?An argument ensues between people sitting either side of me. Language edited for the site, naturally.

"It had better be for Akpan, he's rubbish."

"So he's going to put two passers in the centre of midfield?"

"Who cares, Guthrie is better than Akpan."

Cheers from the first person as Hope Akpan is confirmed as the sacrifice over the tinny emergency PA.

Silence as Guthrie loses the ball in midfield for Wolves' equaliser.

Continued silence as Wolves take the lead, having completely overrun the wings as Reading move to a diamond, with Guthrie against Sako on the right side of midfield.

It takes an instant breakaway goal from Jake Taylor to settle the nerves and stop the rot, before Guthrie picks up a yellow card for a trip on Lee Evans near the East Stand, severely limiting any defensive job he would be able to do. As Will writes in his excellent statistical analysis, it takes another midfield adjustment from Nigel Adkins to wrest control of the game again.

There was a question of whether Danny Guthrie and Oliver Norwood could co-exist in the same midfield, at least without any "pure" defensive midfielder along side them - or at least a physical presence in the zone. That ten minutes, admittely with a less-than-fit Guthrie, may have shown Adkins, and the rest of the Royals support, that it may take more than just those two to control the game. For all their passing ability, it might be that they need exactly the right opposition set-up to thrive in matches. I'm not dismissing Guthrie, and neither should Reading fans - let's not forget that last season he won our Player Of The Month votes in August and September before suffering from injury throughout the campaign - but his tackling and pressing abilities are far below that which is needed from him to contribute in a two-man midfield, especially if paired with Norwood.

And even the best sides have those players who do the unheralded jobs.

For all the flair of Xavi, Iniesta, Messi, Neymar, Pedro, Henry, Fabregas, Ibrahimovic et al at Barcelona over the years... Sergio Busquets has quietly gone about his business, anchoring the back four.

Chelsea might have signed Cesc Fabregas and Diego Costa to make the headlines this campaign, but it might be the repurchase of Nemanja Matic in January which proves to be the key to unlocking that forward potential.

And despite having two of the best young British central midfielders in Jack Wilshere and Aaron Ramsey, and all the forward flair of big money signings Mesut Özil and Alexis Sánchez, Arsene Wenger has insisted on playing either Mikel Arteta or Mathieu Flamini in the middle of the park for every League game this season. No glamour in their play, but plenty of hustle and shielding. Wilshere and Ramsey might be the two better overall players, but Wenger wants the defensive work of the other two to complement the side as a whole.

You don't expect Busquets to score 20 yarders; you don't expect Flamini to ping crossfield balls to the wing; you don't expect Matic to charge late into the box to meet a cross. You shouldn't expect Hope Akpan to perform any of these feats either. The comments from Steve Coppell that the midfielder hasn't kicked on as he expected are well touted by now, but the great man saw his potential and gave him a positive recommendation to Brian McDermott - and he's also just been called up to the Nigeria squad for the first time, so someone in the Super Eagles camp has seen something in the young midfielder.

Hope will always perform the dirty work - the foot in to break up an attack, the pressure on possession, the simple passes to allow someone else to unlock a defense. That should be the expectation too - and nothing more.