Reading’s financial concerns are well documented. We can’t bring in any players, and we need to lose our higher earners. Adam Le Fondre has already gone, and it would be surprising to see Pavel Pogrebnyak, Danny Guthrie or Royston Drenthe line up for the Royals again. We’re also probably not going to be able to turn down offers for our better players – a phrase which, in this context, means “Garath McCleary and Alex McCarthy”. Clearly, this summer is going to be one of what can euphemistically be described as “rebuilding”. Rather than just personnel, should we use this opportunity to change formation?

In the past two years, Reading have dabbled with both a 4-4-2 and variations upon 4-5-1. In 4-4-2, we often seem short of passing options, resulting in the ball being kicked up to the forwards after a few passes between the defenders and Guthrie. In 4-5-1 variants, this is less of an issue, but our striker is usually isolated and we struggle to create chances. Clearly neither system is getting the best out of our current crop of players. We need three in midfield and two up front. One formation could accomplish this: 3-5-2.

3-5-2 (and its sister formation, 5-3-2) were extremely popular in Britain in the 90s. However, a trend towards single-striker formations meant that team were essentially playing three centre halves to deal with one centre forward.

In recent years, though, the 5-3-2 has come back into fashion. Napoli’s excellent performances using it lead to it being adopted by Juventus, and then the Italian national side. It’s also been used successfully in England, with Hull and Wigan both over-achieving whilst playing it, so it is certainly a viable formation.

The biggest challenge to playing a 5-3-2 is finding suitable wing backs. I don’t think this is an issue for Reading. In Chris Gunter and Jordan Obita, we have two excellent attacking full backs who often continue to overlap late into matches and would probably flourish in this role. Youngsters Jack Stacey and Nana Owusu are capable of playing as either wingers or full backs and could provide good cover. Even the mercurial Tariqe Fosu is reasonably good at tracking back.

The other major challenge is working out what on Earth we do when we play against sides with only one central striker. The redundant centre half could lead to other areas being totally overran, particularly the flanks. Fortunately, I think this is fairly simple to solve. Michael Hector would certainly be a starting player in this setup, and is perfectly capable of either stepping into midfield or moving to full back and allowing Gunter or Obita to play in a more advanced role. In the event that he became unavailable, we could use Niall Keown, Pierce Sweeney or Sammi Fridjonsson in a similar role. This would allow us to switch between set-ups without making a substitution.

In midfield, we have an embarrassment of riches. Even if Guthrie follows Mikele Leigertwood and Jobi McAnuff out of the club, we would still be able to call upon Danny Williams, Jem Karacan, Hope Akpan, Jake Taylor, Aaron Tshibola, Craig Tanner, and Aaron Kuhl. Karacan and Williams would start the season as certain starters, and the others provide a wealth of tactical options. The box to box running of Tshibola and Akpan would help us dominate midfield. Tanner or Taylor could sit behind the strikers and link play in a Sigurdsson-role, or Kuhl could protect the defence and control play from deep, allowing Williams and Karacan to push on.

Up front, we will be thread bare if Pogrebnyak follows Le Fondre and nobody new comes in. Our other options are Hal Robson-Kanu and Nick Blackman. Neither has done well up front this season, performing better on the wings, but this formation forces them to play there. Perhaps they will flourish running in behind defences. Dominic Samuel and Harry Cardwell have impressed at youth level despite recent injuries, and maybe one of them will step up next season. This is a worrying position. Hopefully the sales of surplus or expensive players will free up enough cash for two or three lower-league gambles, but I'm not expecting more than one.

So, what could our senior squad look like if we use this set up next season? 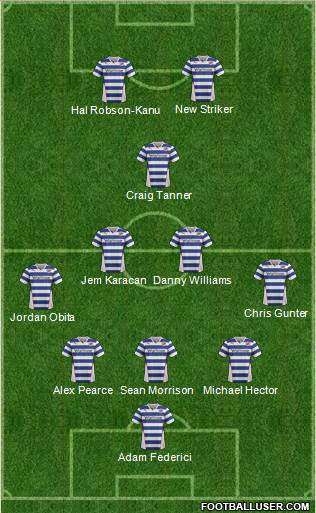 That gives us a strong first eleven, with plenty of chances for young players to break in, and very little fat left to trim. A couple of strikers would certainly be welcome, but otherwise I feel that is a squad that would entertain, and Reading fans could get behind. The question, of course, is whether the young players are good enough –Adkins has shown a great deal of reluctance to play anyone who isn’t Obita this season, and given that this is the man who gave James Ward-Prowse a professional debut in the Premier League aged 16, well, it’s concerning. Regardless, I’d much rather see Kuhl and Tshibola in midfield than two mediocre Bosman journeymen.

I think adjusting the squad to 3-5-2 is, in both the long and short term, our best chance of progressing. It has worked for Hull, and it could work for us too.