Championship - Does overspending on wages lead to promotion?

A pattern is starting to emerge to how a side can find their way into the "promised land" of the Premier League, but it may be one that even Financial Fair Play can't directly solve.

Share All sharing options for: Championship - Does overspending on wages lead to promotion?

Out of the three sides that earned promotion from the Championship last season, how many had a wages to turnover ratio of less than 100%? None. The season before? Only one.

It's not a case of the sides being promoted aren't just slightly going over the 100% barrier either. Take Cardiff - they spent a massive 189% of their turnover on wages in their title winning season of 2012-13 in the search for the milk and honey of the Premier League. Hull City, who finished second that season, had their ratio at 153%.

Not even the new Financial Fair Play in the Championship will combat this directly. In Leagues One and Two, there is a cap on the size of wages to turnover. It's 60% and 55% respectively. There will not be a cap in the Championship - instead punishments are handed out based on losses.

Oddly, Crystal Palace (promoted in the 2012-13 season via the play-offs) wouldn't face sanctions for losses, as they didn't make any - despite their wages to turnover ratio being 129%. The reason - turnover doesn't include the money earned from sold players. This distorts the figures about wages, as only one club made losses from their transfer deals during the 2012-13 season - Cardiff City. Crystal Palace nearly made as much money from transfer deals as they did from other turnover.

Should profits from player sales be included as turnover though? As turnover is simply defined as income, transfer profits should be included as turnover, despite the fact it rarely is. This is due to the traditional accounting of football clubs, taking into account match day income, media income, commercial income (which includes ticket sales, merchandise sales, etc) and general other income, while excluding transfer income. This may be because you can't rely long term on transfer income.

The Football League doesn't include transfer revenue in their calculations for Leagues One and Two, despite including cash injections for owners as turnover. This means a club can effectively overspend, by buying millions of pounds worth of players, but be protected from FFP sanctions because transfer money don't count towards it and they can be saved from financial problems by a rich owner.

As aforementioned, only one of the three promoted sides in the 2011-12 season had a wages to turnover ratio less than 100%. Was this Reading? No.

In the eyes of the Football League, nine clubs over spent on wages in the 2011-12 season and thirteen did in the 2012-13 season. Despite much reduced numbers actually doing so when transfers are taken into account. As the Football League wouldn't include them in their figures about turnover, this article doesn't include transfers in wages to turnover ratio figures (unless stated).

Going back to the title question - does overspending on wages will earn you promotion? Again, no. 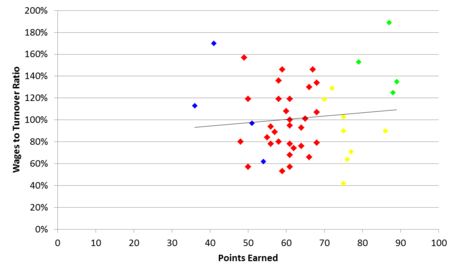 This scatter graph compares the wages to turnover ratio compared to how many points that sides have picked up in the 2011-12 and 2012-13 seasons. The teams that were automatically promoted are shown in green, the sides that reached the play-off are in yellow and the relegated teams are in blue (Portsmouth and Coventry didn't file accounts for the 2011-12 season and thus aren't included in the graph).

The line of best fit shows a slight trend towards promoted sides overspending on wages, but if you remove Cardiff City's 2012-13 season from this graph there is a negative correlation (ie. sides earning lower amount of points are overspending more than sides earning higher amounts of points).

However, it is clear that the four sides automatically promoted in these two season all overspent on wages. Despite this, the lowest wages to turnover ratio in the previous two seasons was achieved by a side that reached the play-offs.

Blackpool managed a ratio of 42% in their first season back down from the Premier League, this was in part helped by the parachute payments, but they had one of the lowest wage bills in recent Premier League history in their season at that level, which helped them massively financially. Blackpool were only relegated on the final day, showing that team spirit can allow a side to challenge for survival in the Premier League.

Upon relegation, Blackpool sold a number of their better players, halving their wage bill to a level that is considered low for the Championship. They managed to reach the play-offs in their first season back after relegation, before a mid-table finish last season. This season wasn't one of their better seasons, but this is understandable as they have to compete with clubs spending almost double their turnover on wages.

Clubs that wish to do things in the correct way have minimal chance of competing at the top end, however overspending doesn't always lead to a good season, as Bristol City found out as their 2012-13 season ended with relegation to League One (with their ratio being 170%).

It will be interesting to see how Reading fared this season on the ratio, as well as a few other clubs - especially QPR. However, we'll have to wait until around next April for those figures...