If this were Buzzfeed, this series would be stripped down to one quick feature titled something like 'the 29 Madejski matches you couldn't bear to miss.' It'd be a run down of the times we played Man Utd, Liverpool and Chelsea, and probably feature a video of a cute cat replicating one of Kevin Doyle's goals.

But this is The Tilehurst End, not Buzzfeed. Here is a chance to take a different look at those key Madejski Stadium moments. An opportunity to inspect the games that have really defined the 16 years spent at the Madejski so far, whether we knew it then or not. Sure, there'll be certain games that we simply can't ignore - our first ever Premiership game, the Liverpool win, the Wigan play off semi final - but we'll also look at some of the less obvious defining moments - matches that we may not have necessarily won, or even enjoyed at the time, but had a profound affect on Reading as a football club.

There's no strict narrative or structure to the choices (mainly because I keep adding to the list and remembering key matches at the most inopportune moments), but at the very least it should provide a nice nostalgic trip down memory lane. A chance to go "yes, who'd have thought that game could have had such an impact on the future of our club," or think "blimey, was Murty's Reading debut really 15 years ago?" And providing on whether you like the idea or not (and providing I don't get too lazy and forget to write them) it should at least divert our attention for 5 minutes over the summer when everyone else is outside pretending to like cricket. 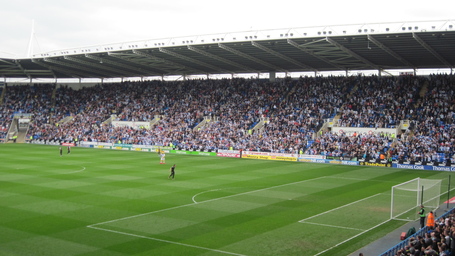 Having pushed for this feature on the basis that it wouldn't cover all the obvious Madejski Stadium games, I start with one that will surely live long in the memory of anyone who attended that night.

This one had it all. Stunning goals, a late winner, sending offs, a raucous crowd, missed penalties and some brilliant fast flowing football.

I'll reveal my hand now in explaining that Reading v Palace always had a little bit of added spice for me personally. Being from South London, chances are that if a family member hadn't been involved with the Royals and taken me to Elm Park for my first ever live football match in 1994, I'd be a Palace fan now. As it is, Gilkes smashed in a last minute winner in front of a wide-eyed seven year old and I knew I'd be a Royal for life.

Surprisingly though, there weren't an abundance of Reading fans to be found living in Croydon in the mid 90s, so for a while beating Palace was my sole aim when it came to any football season.

Bragging rights were still the most important thing on my mind when I took my seat at the Madejski on the evening of Tuesday 13th September for the latest Reading v Palace encounter. But little did I know that winning this would stand for so much more. It'd form part of a record breaking run of games which wouldn't see Reading lose again until 17th February, by which time we were well in control of the Championship...well, you know the rest.

We certainly weren't entirely sure what this Reading team was capable of so early in the season though. We'd had a good start, save a disappointing last minute home defeat to Plymouth on the opening day of the season, but there were still a few question marks lingering (and not just the usual nagging pessimism that comes with following the Royals).

We'd had some injuries to key players - Shorey, Sidwell and Kitson were all missing that night - could two journeymen in Chris Makin & Brynjar Gunnarsson and some unknown striker signed from Cork City for pittance really make up for it? And even if we were still up there come the end of the season, could our relatively inexperienced team hack the pressure? Few, if any, of our squad had spent time in and around the top half of the Championship, let alone played in the Premier League, and cost less collectively than some individual players that we'd be facing that season. 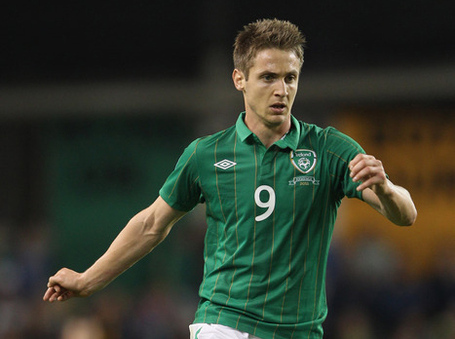 Our main piece of business during the summer was splashing out £1 million on an untested Bristol City striker, whilst the rest of the team had either been with us since the Division 2 days, or had been signed from lower league teams (mainly Brentford). Nevertheless here we were, going into the game against Palace in second place, with 14 points from 7 games.

Now I don't want these pieces to turn into overblown match reports - for me the context of these games is what's truly interesting, and besides HobNob Anyone? does a far greater job in providing comprehensive archived match coverage - but it's hard to sum this game up in a couple of brief sentences.

From the off the match was played at a lightning pace. Our wingers tore into the Palace defence, whilst Reading's own backline had to be alert to the movement and street-smarts of Andy Johnson and Clinton Morrison. In the midfield a battle of its own was also developing, with crunching tackles aplenty as Gunnarsson fought with Ben Watson to get a stranglehold on the game.

And just when you thought the match was beginning to settle down a little, along came the first goal. A long punt from Hahnemann, a great control and mazy run from Doyle, who somehow wriggled his way to the edge of the box and forced a low shot passed Kiraly. This was a goal that owed as much to Doyle's tenacity as it did skill - something that would become a huge asset over the next couple of years.

But back came Palace. Almost immediately it was 1-1, with Andy Johnson getting his customary goal against us. He celebrated in the usual fashion, running provocatively in front of the home fans with his finger to his lips. It would be one of his last actions of the game - he picked up an injury a couple of minutes later and would be replaced by John Macken just before half time. Shame.

Despite losing Johnson, Palace started the second half brightly, and went ahead whilst many were still re-taking their seats. Morrison latched onto a loose ball and prodded home ahead of Hahnemann to the delight of the travelling fans.

But at this point something strange happened. Whilst throwing away a lead would usually result in deflation, it only seemed to spur this new look Royals team on. We pushed and pushed, and an equaliser seemed inevitable...yet we didn't expect it to come in the form of one of the greatest goals ever scored at the Madejski. A ball looped up high in the Palace penalty area. At the tightest of angles, Leroy Lita waited for it to drop before executing a sublime scissor kick. Not one of those poncey "wave a leg at it" scissor kicks either, a full-blown balletic finish. The ball fizzed into the net and the stadium erupted. 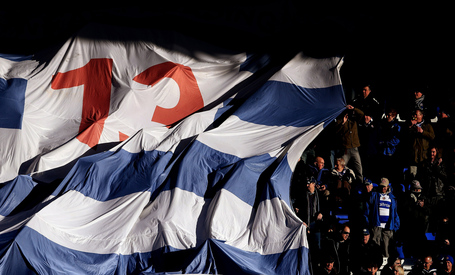 First, a penalty. Or more accurately, two penalties. Both of them awarded to Reading, both of them missed. This 2005/06 team was good, but even they weren't immune to the odd Royal jinx - the complete inability for any Reading striker to consistently score from the spot still being one of the most powerful curses I've witnessed during my 20 years as a Reading supporter.

Lita missed first, a tame penalty saved by Kiraly. But the referee demanded a retake...phew, a second chance! Glen Little was the man picked to spare Leroy's blushes, but he only managed to do so by proving a professional could take an even worse spot kick - it was so tame that Kiraly actually managed to hold on to the shot.

Still the Royals would not be denied. Reading rallied. Palace riled. So much so that Iain Dowie was sent to the stands for providing a passable impression of Neil Warnock on the touchline.

But time was running out. There were just three minutes left on the clock when Reading won a corner in front of the North Stand. Up came the centre backs for one last push. Another perfect cross came in and Ibrahima Sonko met it majestically to nod into the back of the net.

Wow. Here we were witnessing a classic at the Madejski, and it was Reading coming out the victors.

Now I know you start to concoct certain scenes in your head when you reminisce about old matches, and I'm sure what comes next in my mind didn't actually happen, but as I remember it, the final whistle was greeted with players strewn all over the pitch, completely knackered. In my head, it's like a scene from Platoon, valiant soldiers who have given their all lying motionless on the ground, exhausted from the battle they'd been involved in.

In the stands, we were in pieces too. Celebrating not just a win, but a feeling that maybe, just maybe, we were on the cusp of something special.

And indeed this game neatly summed up all the very best qualities that possessed that team during the 2005/06 season. Fast, flowing football. A never-say-die attitude. A strength in depth - when a key player missed out, as Shorey, Sidwell and Kitson had done that day, the replacements would step up to the plate and shine.

Yup, this was a team that seemed worth getting excited about. But it was only September and we'd all been watching Reading far too long to get too far ahead of ourselves. It couldn't last much longer, could it?