So last week we introduced you to our participation in SI Game's Parallel Championship competition where we'd be competing in a virtual Championship, mirroring real life fixtures. You voted on our team selection and we took that into our opening game with Wigan, here's how we got on.

Each week the squad is supplied to us by the game developers and while transfers have been taken into account, injuries haven't. This presented us with the ethical dilemma of whether to use McCleary, Karacan etc or play with what Nigel had to choose from. With that in mind we gave you the choice to vote on whether to go with what we had, or what Nigel had and you narrowly choose a full strength squad by 53% to 47% but we'll have more on the future of that policy later! 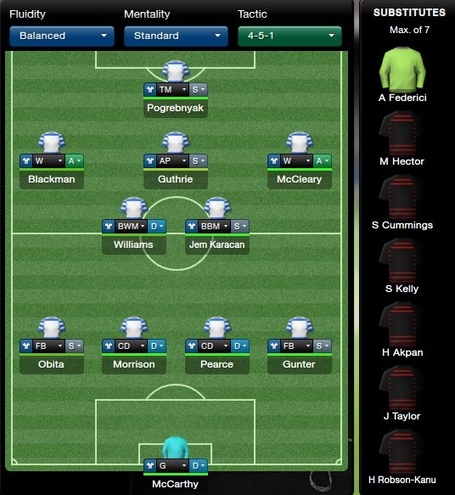 So with that in mind we selected the 18 you'd voted on and went into the game against Wigan fan Nathan, who replaced original opponent Paul who withdrew from the competition due to other commitments.

The game was played at White Hart Lane, as the technology of the game ensures all games online are played at a neutral venue, so that's why Reading are listed as the 'home' side. Only 4,959 decided to turn up to this one and judging by the first half who could have blamed them.

Callum McManaman's first half goal was about the only noteworthy moment (sound familiar?) and we went into the break having seen just 1 'key' highlight at 1-0 down.

Nick Blackman had a shocking first half and sitting on a 6.3 we brought on Hal Robson-Kanu to take his place. Hal's impact was immediate as he crossed from the left to find the bursting McCleary who finished from 6-yards to make it 1-1.

Jem Karacan completed the scoring at 3-1 and we'd picked up the first three points of the season. 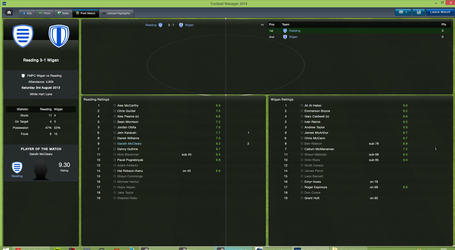 So a positive start to the campaign, with McCleary the clear MOTM.

Going forward the developers have said they may well add in real life injuries into the squads that we get sent every week. This would automatically rule out the likes of McCleary etc but in the meantime we'll include them in our plans and give you the chance to vote on teams that include them.

Our next opponents will be Ipswich so we'll give you some team choices for that game later in the week.

Meanwhile you can view all of the goals here.