Last week we opened up our entry into SI Games Official Football Manager Parallel Championship with a 3-1 win over Wigan, could we make it two wins from two against Ipswich?

Firstly an apology from myself and assistant editor manager Jonny, we were planning to give you guys and girls the chance to vote for our team for week 2 but due to being away on holiday I couldn't get the prep work done. More crucially it looked at one stage that we wouldn't have an opponent this week but thankfully an opponent was found at the 11th hour to take on Ipswich, setting the stage for our week 2 encounter.

This week's squad was boosted by the additions of Anton Ferdinand, Jamie Mackie and Simon Cox while as we mentioned last week, injuries aren't taken into account so we had the likes of Jem Karacan and Garath McCleary fit to continue their goalscoring exploits from that win in week one.

Team wise, we handed debuts to Mackie and Cox who replaced Nick Blackman and Danny Guthrie, while Anton was given a spot on the bench, with Sean Morrison making a farewell appearance in the hoops. 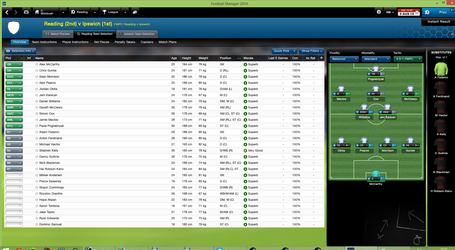 Into the game itself and we quickly raced into a 2-0 lead. First a Garath McCleary corner was nodded home by Danny Williams before moments later McCleary himself made it two with his third goal in two games.

Ipswich didn't take things lying down, and at the neutral venue of the Etihad, pulled a goal back through captain Luke Chambers to made it 2-1 going into the break.

The half-time interval gave us a chance to tweak our tactics and after playing a more counter attacking style, Pavel Pogrebnyak was suddenly right in the thick of the game, only to waste a couple of great 1-on-1 opportunities to give us some breathing space.

Alex McCarthy was also busy in the Reading goal, keeping out a number of dangerous looking chances but late goals from big Pav and McCleary made the game safe and gave us a 4-1 win that keeps up our 100% start to the season. 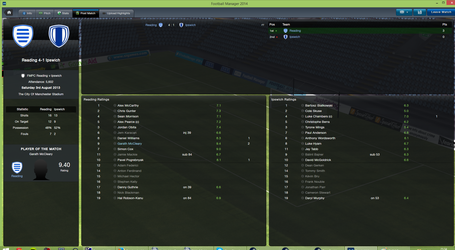 So two games, two wins, seven goals and just two conceded. So far Garath McCleary has been the stand out performer with four goals in those two games and if he can keep that sort of form up we'll be in the promotion race come the end of the season.

As for this week, we have games against Huddersfield and Nottingham Forest to play before Sunday night but as of yet we're not sure which day we'll be playing!

So ahead of those games we have a big decision to make, just who replaces Sean Morrison?

Anton Ferdinand is the higher rated of our remaining centre backs at the club but do we give the youth a chance and opt for Michael Hector? We'll give you that choice! Just vote for who you want us to play alongside Alex Pearce next week.