Could we continue our two game winning streak into a double header against Huddersfield and Forest? Read on to find out our latest results in the SI Games official Football Manager Parallel Championship.

While Reading faced Huddersfield and then Forest, scheduling and availability of our opponents meant that we would take on Forest first.

Our poll in last week's result asked whether Michael Hector or Anton Ferdinand should start in place of the departed Sean Morrison. Over two thirds of you voted to give the Academy product the nod, so start he did in a team that saw one other change to the team that had beaten Ipswich 4-1, as Hal Robson-Kanu replaced Jamie Mackie who dropped to the bench. 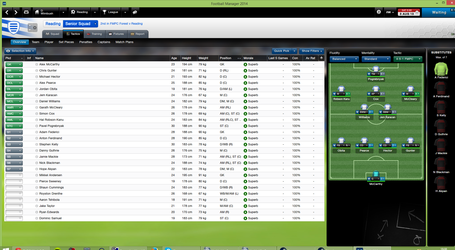 Unlike the real Reading team who folded under pressure from a rampant Forest side, this version of the Royals team started and finished in dominant fashion. Pavel Pogrebnyak scored the opening goal within seconds and just seven minutes later Garath McCleary had us 2-0 up and cruising.

A Karl Darlow goal gave us a 3-0 half-time cushion and the game was totally wrapped up eight minutes after the re-start when McCleary smashed home his fifth in three games. 4-0 it finished and Reading heading for the top. 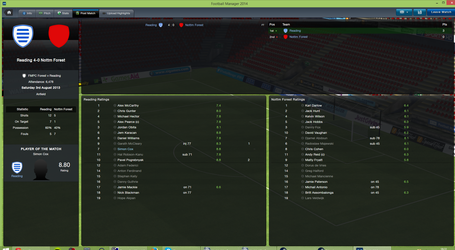 With myself at Reading Festival this past weekend, the next game fell to Jonny who took over proceedings for the Huddersfield match. Jonny made a fair few changes, bringing in Federici, Ferdinand and Mackie in place of McCarthy, Hector and Robson-Kanu and initially his team struggled to break down a dogged Terriers side.

Fortunately the floodgates would burst in the 49th minute as a flurry of three goals in 12 minutes from Mackie, Pogrebnyak and McCleary made it 3-0. Huddersfield would get back in the game with a Nakhi Wells strike on 67 minutes but McCleary's seventh goal in just four games sealed a comfortable 4-1 win to leave us with 12 points from 12 games. 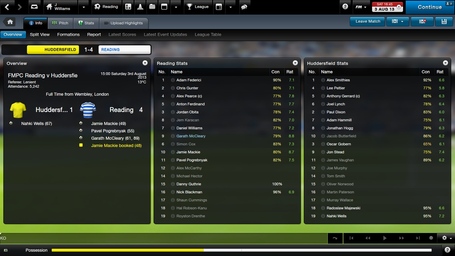 So can anything stop this runaway train of Reading success?... Quite probably but I'll say what I've said every week so far, this parallel Championship goes a long way to suggest just how much better we could, might and should be when we get our vast injury list sorted.

So it's on to Middlesbrough next week, and once again we'd like you to help us pick the side.

Quite simply should we go with Team Jonny or Team Wimb next week? The choice is yours!