So after a dominant start to the FMPC campaign we faced Boro in our week four matchup. Could we go and replicate the real life win masterminded by Nigel Adkins?

Share All sharing options for: FMPC Week 4 - A Boro Bother

You the readers voted to put your faith in me after both myself and Jonny had won week three games but with voters narrowly selecting my team, I was put in charge of affairs for the trip to the Riverside Stadium of Light.

With Alex McCarthy gone, Adam Federici took his place in goal while I opted to give Anton Ferdinand a game alongside Alex Pearce in an otherwise unchanged side from the one that had beaten Forest. There was no place for new boy Oliver Norwood who remained outside the 18.

Sadly things couldn't have got off to a worse start against Boro fan Richard, who took the lead with his very first effort on goal from Kike on six minutes.

From that point on it was all an uphill battle and in truth we created very little of note while Boro could have been two or three up by the break.

With Simon Cox failing to create behind the Pog, Danny Guthrie came on but the former Newcastle midfielder couldn't provide the spark needed and the second half was all Boro. Their pressure was finally rewarded when sub Emilio Nsue beat Federici to give the 'home' side a 2-0 lead they wouldn't surrender.

To make things worse, Danny Williams was shown a red card for a second bookable offence, while the only chance of note for us came in the dying moments when top goalscorer Garath McCleary fired wide when put through on goal. 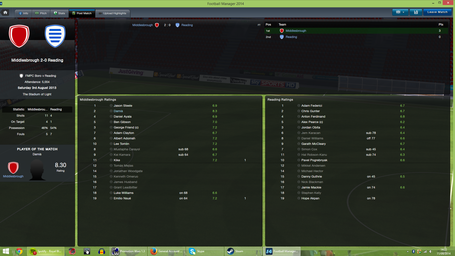 So the unbeaten record is dead but a record of four wins from five keeps us firmly in promotion contention as we head into a double header with Fulham and Millwall.

Next week we'll have the services of Glenn Murray so the question is do we pick him up front or stick with the Pog who's scored four in five? Vote in our poll and we'll abide by the majority decision.