You voted, we counted, now we can reveal who won the award for the first month of the season.

Share All sharing options for: Reading Player of the Month Results - August 2014

And your winner, with 48% of the vote, is youngster Aaron Kuhl. He might have only made three League appearances in August but he earned the MOTM award in the home defeat to Huddersfield, and came second in the poll as we lost 4-0 up at Nottingham Forest. With the injury crisis starting to subside, it may be that Kuhl heads out on loan to further hone his craft, but at least Royals fans have seen our bright future just as the summer ends.

Alex Pearce came second in the POTM vote, grabbing 22% of your votes, with fellow centre-back Michael Hector third in the poll. Utility player (well, left-back, but he was used all over the park in August) Jordan Obita got 7% of your votes, and Chris Gunter rounded out the vote with 5%.

The full results of our poll are below, but all that's left to say is congratulations to Aaron, and here's to many more such awards in the next few years! 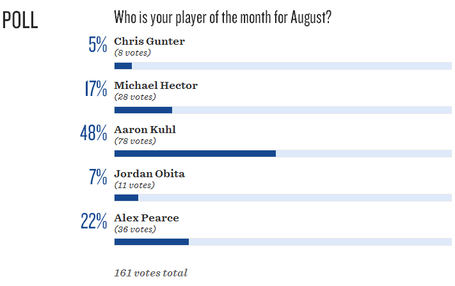