The 3-0 thrashing of Fulham was always going to be a hard act to follow, and while a gritty win against Millwall doesn't sound the most flashy of victories, the stats of the game give plenty of reasons to be optimistic.

Unsurprisingly, playing against 11 men is tougher than 10, and Reading's midfield found themselves with much less space to operate in than they did against Fulham. While Oliver Norwood quite deservedly drew rave reviews for his passing masterclass at the weekend, he was much less influential against the Lions, registering 65 passes compared to the 107 he attempted on Saturday. Putting this into context, though, 65 is the second greatest number of passes attempted by a Reading midfielder all season, second only to Norwood's Fulham return. Norwood's position as lynchpin of this Reading team seems pretty undisputed at this point in time, it will be interesting to see if the return of Danny Guthrie or the development of Aaron Kuhl will push him for that title as the season progresses.

It is fair to say that Hope Akpan has not had the most convincing of careers in a Reading shirt, but in the last few games it appears that he has been asked to do a specific job and has carried it out well. He registered 53 passes against Fulham and 35 against Millwall, with a pass accuracy of 92% and 86% respectively. This is an excellent return for a player whose passing has been questioned at most stages of his career in Berkshire, and while his passes look to be fairly simple, they are accurate. How often do teams cry out for a man to just do the simple things well? 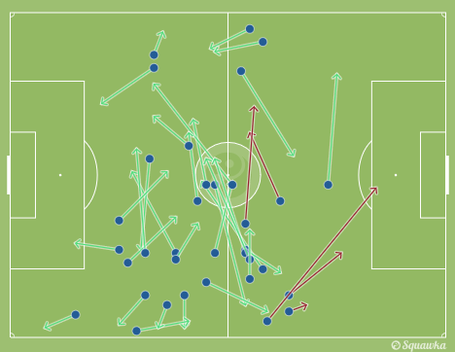 For now, Akpan is playing a crucial role to allow Norwood to boss the midfield. Norwood sits deep and puts the tackles in (he's made more tackles in the last two games than any other Reading player on the pitch), while Akpan does the more advanced work giving Norwood the space to pick out the passes. It's a similar partnership to the one we started to see at the start of last season with Karacan and Guthrie, and the Norwood-Akpan partnership looks to be faring well.

The return of Jordan Obita to the left back position is, besides the arrival of Norwood, the most influential thing to happen to the team in the last few weeks, bringing balance to the shape of Reading's attack. Cummings' bemoaned lack of a left foot does seem to have had a significant impact on the way the team shapes up to attack, as the table below shows:

The ‘Left-Right Ratio' (you wanted groundbreaking stats, didn't you?) shows the proportion of attacks that go down the left compared to those on the right: a score of 1 indicates perfect balance, less than one means more goes down the right and more than one means that more attacks go down the left. Obita took over from Cummings for the Middlesborough game,which can be written off as an unusually right-biased outlier because of the attacking threat of Albert Adomah, and the need for Obita to hang back to take care of him. Middlesborough aside, it would seem that the return of a left foot to left back has dramatically increased the balance of the team, and Obita's performances seem to warrant his continued use at left back: two assists on Saturday and 4 teasing crosses into the Millwall box showing real signs of an attacking full back in form.

A question has been asked on this very website about who should take over from McAnuff on the left side of midfield, and yesterday's game has one little statistical quirk that may give us some indication of where Adkins' thinking is. In his post-match interview, he admitted that they were looking to exploit the height of Nick Blackman, a potential candidate to fill our former captain's boots. Looking at Federici's kicking stats: 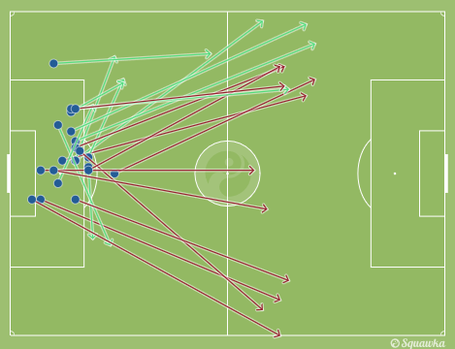 The only long balls that Federici was able to successfully play were to the left. If Adkins' relies on his 'Plan B' of more direct play, then Blackman is going to be a very useful part in that strategy. Perhaps Feds' kicking stats are just a quirk, but this won't go unnoticed by Adkins, and if the injury crisis lasts much longer, the height of Blackman may start to play into his thinking a little more.

Adkins' style of play may not be fully applied yet (playing the same number of passes, with a worse accuracy, as a team not renowned for silky play is not a great headline), but the player stats show an encouraging development in Reading's style. This is a team that is slowly becoming more balanced and more confident in itself, and with the resilience to grind out results like yesterday, this could yet be a successful season.