The old gold of Wolves will be seen at the Madejski Stadium on Sunday for the first time since 2010. @jonnyscott862 takes us through what we should expect from the League 1 champions.

A team that has failed to score in its last two games coming up against a team with the stingiest defence in the league. Overcoming this stubborn Wolves defence is the challenge this weekend, they have only conceded 3 goals in 8 league matches so far this season - a phenomenal statement on their return to the league.

Do not let the appearance of a solid defence fool anyone about the strength of this Wolves attack, though, so far they have managed to create 88 chances, the 6th highest in the league, of which they have stuck away 8. Reading, on the other hand, have created 64 chances, the 3rd worst in the league, and stuck away 11. We have a strangled, albeit clinical, attack coming up against a very impressive defence; and a productive, albeit wasteful, attack coming up against, well, a defence that shipped four against Forest.

The tricks of Bakary Sako will be a test for whatever full back lines up against him, although going by this heat map it seems that he is being given the free reign of the pitch. We can expect a lot of Wolves' play to come through him. 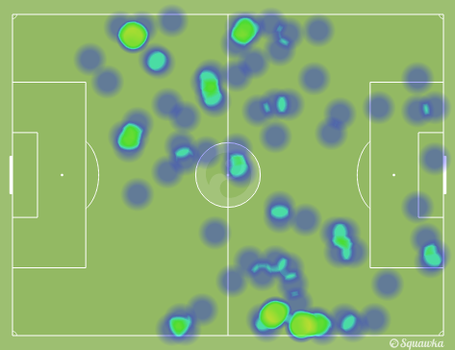 Another player to watch out for is former Reading left back Scott Golbourne, who has played more key passes in the league than any other defender. This is not just a defensive back line, but one with some teeth as well.

Wolves line up in a similar 4-2-3-1 as Reading, with deep lying midfielder Kevin McDonald operating the quarterback role and the formidable form of Nouha Dicko acting as the attacking spearhead. They thrive on possession and passing, with a league high possession average of 55% and more successful passes than any other team (over 1100 more than Reading, incidentally), Kenny Jackett looks to have put together a frighteningly efficient team.

I don't think this is going to be a cracker, Wolves have tended to win by small margins, and I worry about our attack, but it is going to be an interesting marker on how Adkins wants this team to develop. Will Reading turn up intent on playing Wolves at their own passing game, or will Adkins tell them to play it long and exploit marauding fullbacks? Whatever tactic he employs will be a statement of faith, or lack thereof, in this current crop to play out his style of football.