The half time substitution of Danny Guthrie on for Hope Akpan seemed to swing Reading's game against Wolves to the visitors' benefit. Will Jones looks at where Nigel Adkins went right and wrong tactically in another exciting clash at the Madejski Stadium.

So far this season Reading have shown a marked improvement in their passing game. The arrival of Wolves though was always going to test Nigel Adkins’ confidence in his team’s ability on the ball.

The League 1 champions not only boasted the league’s best defence but were also the team with the most completed passes. In the past such an opponent would have seen Reading surrender possession, get men behind the ball and look to make the game as tough as possible for their more skilled rivals.

For the first 30 minutes that was how the game unfolded, as Wolves’ passing ability saw them dominate the passing statistics against Reading's 4-4-2 formation: 147 passes (81% success rate) compared to the Royals who attempted 90 passes (71% success rate).

Reading though looked to press their opponents high up the pitch meaning that despite having more possession Wolves were unable to get into a real rhythm.

Of course the most important statistic was the score line, with Reading taking the lead. But Nigel Adkins was clearly worried about Wolves dominance of possession so switched to a diamond formation: with Norwood at the base and Cox at the pinnacle of the midfield four.

This move changed the game, and for the 15 minutes before half time it was Reading who controlled the game with 101 passes (87% success rate) compared to Wolves’ 66 passes (84% success rate). 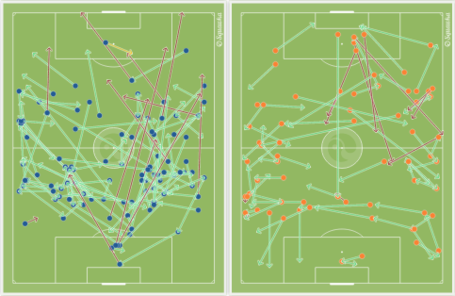 Both teams passing in the 15 minutes before half time

Despite this, Adkins still felt the need to bring on Danny Guthrie for Hope Akpan. The statistics show that the Nigerian Scouser can count himself unlucky to be sacrificed.

He had responded well to the change to the diamond, only misplacing one of his 11 passes and playing much further forward than in the opening 30 minutes. In total Reading’s diamond midfield made 53 passes in the last third of the half with all four players getting on the ball: Simon Cox 8 passes, Oliver Norwood 17 and Jake Taylor 17.

The fact that Reading conceded twice in less than ten minutes after their half time substitution would seem to suggest Adkins made a mistake. A move to a diamond may have helped Reading gain control of possession but it also surrendered the wings to the opposition. Kenny Jackett clearly told his team that at half time, as his team’s first two goals came from attacks out wide.

The heat map below show how Wolves started the second half looking for inspiration from Mali international Bakary Sako who lined up on their left hand side. This was also the side of the pitch that Guthrie was covering on the right hand point of Reading's diamond midfield. 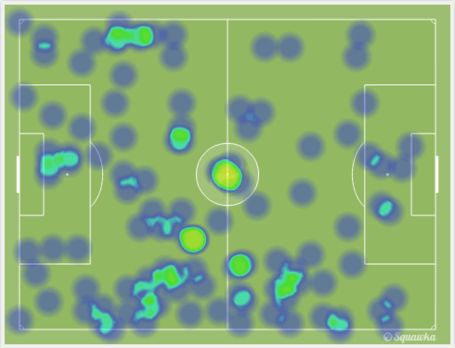 Recently back from injury, it was perhaps not surprising that it took Guthrie time to get to grips with the game. In his first 15 minutes on the pitch he managed just three passes and not a single tackle or inception.

The Guthrie substitution seems to be a case of Adkins being too eager to change his team. Guthrie is undoubtedly a more technical player than Akpan but Adkins may have been better served placing more faith in his team (and Akpan) and waiting to see how Wolves responded to his successful move to a diamond.

One impact of bringing on Guthrie was that the workload was shared far less amongst Reading’s midfield. In the 23 minutes before Cox was replaced by Jamie Mackie, Norwood made 17 passes at the base of the diamond, Guthrie 12 (showing that he did eventually get into the game), Cox 9 at the top, and Taylor just 2 passes.

Given these statistics it is perhaps not surprising that Cox and Taylor were substituted. Bringing on Mackie, and then Kuhl, saw Adkins make his third tactical change this time to 4-2-3-1 with Norwood playing further forward.

Once again the statistics show Adkins was able to change the game to Reading’s benefit. As the graphics below show, the move saw Reading regain momentum and move the game away from their third of the pitch. 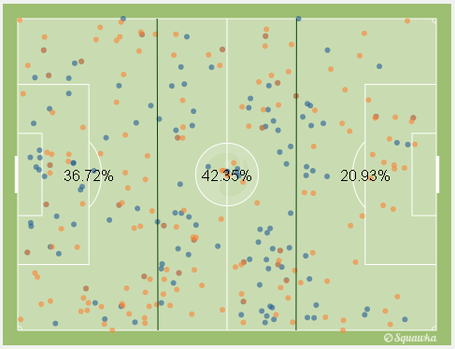 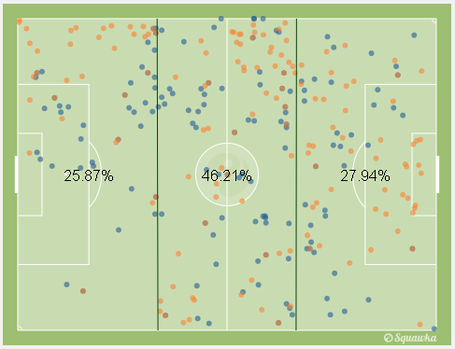 Sunday’s game was certainly a real test for Reading. Before the game my fellow statto @jonnyscott862 had remarked that this game would show whether Adkins had faith in his team’s passing abilities. The changes he made showed he now feels his team can pass and control the game even against the best passing team in the league.

Gone are the days when Reading would line up in a 4-4-2 no matter who they were playing. In this game alone Adkins used three different formations and asked six of his players to play in more than two positions.

Bringing on Guthrie was an example how such tinkering can potentially cause problems but on the whole it can only be promising that Reading were able to be so tactically versatile and confident on the ball.