It was a night of mixed feelings in Rotherham for Reading who let two points slip from their clutches against a side in the relegation zone, although this was a game that Reading could have easily lost as well.

Share All sharing options for: Rotherham United 1-1 Reading FC: A Fair Reflection Of An Open Game

Steve Clarke opted to shuffle his pack for this one, bringing in Andrew Taylor, Garath McCleary and Danny Williams for Jordan Obita, Ola John and Aaron Tshibola as pretty much like for like replacements and maintaining the now customary 4-2-3-1.

The opening 15 minutes saw Reading dominate possession and making the pitch big, with Garath McCleary looking a particular threat down the right. The full backs often had acres of space to move into throughout the match, and indeed  within the first minute McCleary was played into the inside right channel in the box to fire the first effort on target. Lee Camp saved reasonably comfortably, but it seemed a wasted opportunity.

On the flip side, in the first half the left flank looked weak with Lucas Piazon disappointing once again, failing to offer Andrew Taylor much in the way of an option despite the space that was available, his natural inclination being to play infield and not offer the width that was really needed.

Subsequently Rotherham played themselves into the game after a subtle tactical shift from new Millers boss Neil Redfearn. Having seen precious little of the ball in the opening 15 minutes the emphasis shifted from quick channel balls for Clarke-Harris and Derbyshire to run onto, to playing into feet. Clarke-Harris, clearly matched up to one of the division's best defenders in Paul McShane, showed adeptness, strength and power to bring others into play, as a result Rotherham immediately started to look more dangerous. Clarke-Harris himself had a toepoke that dribbled wide, al-Habsi I think would have saved had it been on target, while Matt Derbyshire hit a nice curling effort that al-Habsi palmed wide on the stretch.

The deadlock was broken in fine style on 26 minutes by the obvious source, Nick Blackman. A quick break by Rotherham broke down after two potshots in quick succession were blocked, and the ball was immediately worked infield to Olly Norwood in space 25 yards from his own goal. A quick look up saw Blackman arcing his run behind the defence, and an immediate long pass over the top onto Blackman's chest. The chest control was masterful, knocking the ball into space in front of him, and with the ball sitting up nicely to be smashed 25 yards from goal, Blackman did so with deadly accuracy, past Camp into the top corner. So for all Reading's neat and tidy possession and control, direct football saw us take the lead. Make no mistake though, this was not route one in the Wimbledon style of old, this was a superbly accurate long pass to Blackman on the run who in turn did his bit superbly. I would happily watch those types of goals all day long.

The goal knocked the stuffing out of Rotherham, after having played themselves into the game well after an ominous opening 15. Reading looked in control from that point forward, snuffing out the threat posed by the Millers attack and looking to take complete control. Had Reading gained the second in the first half the game would probably have been over, and Reading should have increased their lead when Piazon found himself in a similar position to McCleary, quickly turn and shoot but Camp on the stretch made a good save. And so, with Reading on the front foot, the half ended with Reading one goal to the good and comfortable.

No changes at half time, but unfortunately where Reading had looked solid in the first half, the second started with what can only be termed disappointing as Reading conceded almost immediately from a set piece. A left wing corner on the Rotherham left was swung in and Danny Collins found himself at the back post unmarked in acres of space to volley home, al-Habsi getting a hand to it but unable to prevent it going in.

The equaliser gave the Millers a clear lift and from then on Reading knew they were in a game. The usually reliable McShane and Hector looked decidedly uncomfortable as the game stretched and opened up, neither side seemingly able (or willing) to bring a measure of control to proceedings. As the game opened up, so did the space for players to play. It was noticeable that the likes of Orlando Sa, unable to influence the game in the first half, and more noticeably Lucas Piazon, looked more assured and influential. Sa in particular started to take control of proceedings with some intelligent dropping off the defence to receive the ball to feet, while Garath McCleary looked the most likely creator until his departure for Matej Vydra just past the hour, when Clarke also brought Paolo Hurtado into the fray for the once again disappointing Lucas Piazon.

The double substitution saw a change in shape to what seemed a more orthodox 4-4-2, Blackman dropping to the right wing, Hurtado left with Williams and Norwood holding the fort in midfield. Vydra slotted in up front alongside Sa. What was noticeable was that Sa and Vydra seem to have a bit of an understanding, Sa attempting to find Vydra on a number of occasions. On another day, Vydra could have won the game, he had a couple of clear sights of goal, one of which brought a very good save from Lee Camp late on, but his rustiness was clear as a number of misplaced or underhit passes littered his display, not forgetting miscontrolling the ball a few times as well. Blackman on the right looked dangerous and seemed to have the skilful measure of the full back, debutant Harry Toffolo, despite being doubled up on by Paul Green on every occasion, but unfortunately the man of the moment was unable to create the defining moment despite his best efforts. 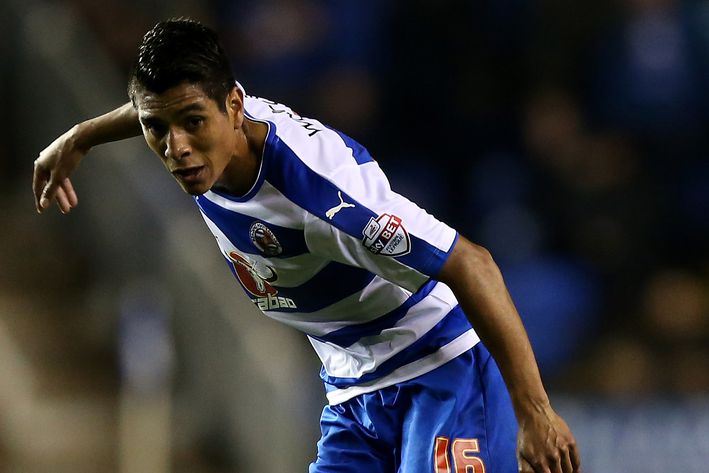 A draw to keep the unbeaten run going, but how did the players perform individually?

As it was the best chances to win the game fell to Rotherham, first off a horrible throw in from Chris Gunter left Danny Williams horribly exposed, the ball was nicked away and fed into Clarke-Harris who, from an angle with just the keeper to beat, brought al-Habsi into action low to his left, the rebound being swept away by Gunter before Derbyshire could get there. From the resulting corner, the ball wasn't cleared and dropped to a Rotherham man, again totally unmarked, who stabbed goalwards. Al-Habsi to the rescue once again, who does rather well to ensure the ball does not drop to the feet of Derbyshire who is in close proximity.

Ultimately, Reading should have mixed feelings with the point. They have come away from a match disappointed as, had they played to their full potential, they should have won, but will be disappointed with the amount the game opened up. Under Steve Clarke we try to impose a significant amount of management on our games so it will no doubt be disappointing to him that we were unable to prevent the match becoming stretched in the second half as a spirited and capable Rotherham side threw everything forward in an attempt to get the three points.

Having said that, the switch to 4-4-2 opened up gaps in our midfield, and it was noticeable that Olly Norwood's ball playing influence was diminished somewhat by the change as a result of the additional responsibility that come with a midfield 2 in comparison to a 3. It was also disappointing that we did not take advantage of the situations we worked, particularly in the second half when in very promising attacking positions.

However, we should be pleased with the point as Rotherham could have taken the three points, and while either side will say they should have nicked the second on balance of chances a draw was a fair reflection on proceedings.