On a cold blustery day Cardiff City ended their long wait for a goal with a comfortable win over an out-of-form Reading team. @WilliamOwain reports on another frustrating afternoon.

A month's a long time in football. Go back to the beginning of October and Reading were second in the table looking good for a title challenge. Fast forward a month and Reading have dropped to eighth having failed to win any of their last five games. The last international break came at a bad time; this one comes at a good time.

Reading were not that bad, shown by Cardiff's goalkeeper David Marshall being named the Bluebirds' man of the match, but no one in attendance today would dispute that the home side deserved the win. There were some signs of promise. Reading once again created a lot of chances and the huge distances between defence and attack, which were on show against Huddersfield, were never seen. Unlike last year's league game at Cardiff it was possible to leave the ground feeling that there is more to come from Reading.

After a disappointing performance on Tuesday, Steve Clarke was expected to make changes to his starting line-up and he didn't disappoint. Garath McCleary, Jordan Obita, Lucas Piazon and Danny Williams were all dropped after substandard displays whilst club captain Paul McShane missed out through injury.

Alex Fernández, Michael Hector, Ola John, Orlando Sá and Andrew Taylor were the beneficiaries in a Reading team that once again looked attacking if worryingly weak against a Cardiff team known for their strength. Such fears were only added to when former Reading player Sean Morrison easily beat Anton Ferdinand to narrowly miss from an early Cardiff corner.

The first real chance fell to the home side when Fernández carelessly lost the ball just outside the Reading box but, luckily for the Spaniard, Joe Mason missed the target when he should have forced at least a save. Another Reading mistake occurred soon after when Hector failed to clear from a dangerous cross and Taylor had to make a superb last ditch clearance to stop Craig Noone from tapping in.

Despite lots of promise from Reading it was perhaps a sign of their performance that it took them half an hour to register a shot on goal, by Nick Blackman, from open play. Reading were neat in possession but all too often Cardiff were easily winning the 50-50 challenges.

The Royals were also guilty of giving the ball away cheaply, none more so than when Sá was easily tackled on the edge of the box. From the resulting loose ball Noone beat Hector far too easily and forced Ali Al-Habsi into a fine save.

Five minutes before half time a Reading counter attack gave a glimpse of the team we saw in September. Matěj Vydra won the ball back and released Sá who played in Blackman. On first viewing I thought Blackman should have done better than forcing Marshall into his first meaningful save but replays showed the chance was more difficult than I first thought.

Just as it appeared that the first half would finish goalless Reading were made to pay after giving away one too many silly free kicks. Kenwyne Jones has shown his aerial prowess on many occasions against Reading and it was no surprise when he headed home his annual goal against Reading to give Cardiff the lead.

Jones had notionally been marked by Hector but the defender got his positioning all wrong and then showed no appetite to challenge the striker. The Royals had already been given a warning from an earlier free kick, when Jones beat a non-existent Hector challenge, which made the goal seem almost inevitable especially as Taylor was struggling to legally contain the impressive Noone.

There was still time before half time for Marshall to make a fine save when he denied Sá after the Portuguese striker had shown great footwork to create a chance for himself. A month ago such chances would have gone in. 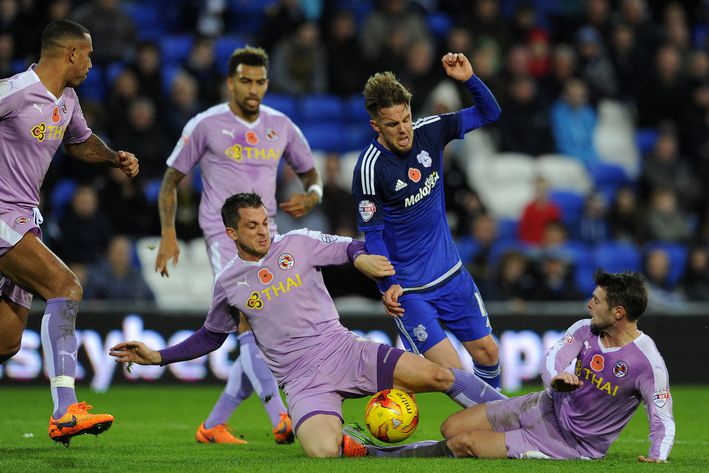 It was another frustrating day for the Royals with some players having games to forget. Here's our verdict on the individual performances.

Any hope that Reading might be able to make it three games in a row where they avoided defeat after going behind, were dashed early in the second half when their vulnerability from set pieces was shown again. Joe Ralls again provided the cross and though the attacker was this time Matt Connolly, and the defender Anton Ferdinand, the result was the same: an easy goal for Cardiff. Game over!

I feared the Royals' heads would drop but to give them credit they did show some fight. Blackman once again seemed to be a one man attack whilst Oliver Norwood was a rare Reading player who continued to want the ball. Worryingly Sá and Vydra once again struggled to get into the game and at times the Royals were quite happy to let their wingers, Blackman and John, take the responsibility and blame for attacks breaking down.

Noone almost got the goal his performance deserved when he again easily beat Taylor and soon after Hector made a horrendous mistake which almost gifted substitute Idriss Saadi a début goal. After that Reading mounted what is becoming their customary futile siege on the opposition's goal.

Norwood forced Marshall into a spectacular save from a free kick. From the resulting corner Marshall again pulled off an impressive save from a Sá header. The Scottish goalkeeper then got his hattrick when he denied Hector from the next corner. How Reading could do with a goalkeeper like Marshall who not only makes saves when he shouldn't but has a calming presence that gives the rest of the team confidence.

I was amazed after the game to find some fans on twitter questioning Clarke's future at the club. Those fans need a reality check just like those of us, me very much included, needed after our impressive form in September. Yes our drop in form has been alarming but I have seen enough glimpses in the five games I have attended since Middlesbrough to know that Reading are still a good team which should challenge for at least a play-off place.

What has become clear in the last month is that the Championship is a higher standard than Reading fans maybe thought. Yes we have improved since last season but so has the rest of the division. It is also evident that whilst the huge summer turnover saw a change in quality, the character and personalities in the squad have not really changed.

Danny Guthrie and Pavel Pogrebnyak may be long gone but they have been replaced by similar players who, like them, probably view Reading and the Championship if not a step down then a frustrating sideways move. There are few leaders in the current squad and unusually for Reading we're quite a small team.

It was no surprise that Cardiff outfought and overpowered us today, which must raise questions into Clarke's selection choices. I rate him as a coach but once again he picked the wrong players. Danny Williams may be out of form but he should have started today, ahead of John or Vydra, to offer a bit more of a physical presence in the midfield.

Reading deserved to lose today but it is too soon to start panicking. Just like we now know we were premature in getting so excited a month ago.