After all the hype and hyperbole, a happy homecoming for Brian McDermott, whose Reading side ground their way to a solid three points against Blackburn thanks to a superb early strike from Danny Williams. McDermott received a rousing reception before kick off, given the big buildup by DJ Megaparty. For once, the East Stand didn’t disappoint on an otherwise quiet day from the Reading contingent.

After the walking wounded left the KC Stadium on Wednesday the pre-match talk centred around just who would line up in defence, and McDermott opted to line up with Chris Gunter at right back and the returning Stephen Quinn at left back. Quinn would go on to have a terrific match and easily takes my man of the match award. Paul McShane and Michael Hector lined up in the middle, with Oliver Norwood, Danny Williams, Nick Blackman and Garath McCleary on the wings, while Hal Robson-Kanu and Matej Vydra completed the lineup.

The match itself was, perhaps predictably, a bit of a war of attrition, two rigid 4-4-2 formations battling it out in midfield with good Championship defenders on both sides snuffling out the threat of the renowned prowess of Jordan Rhodes and Vydra in particular. The game saw few chances throughout, and even Williams’s goal can’t really be counted as a chance. 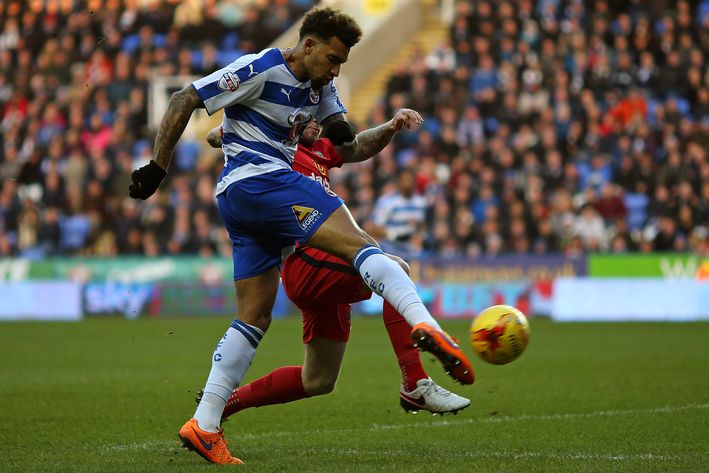 Stephen Quinn shows what Reading were missing but Matěj Vydra struggles again. VOTE for your man of the match.

Readers may remember a superb strike from David Bentley in December 2006 that won the game for Blackburn that day, well Williams’s strike equalled it in quality and deserved to win the game by itself. A long ball played forward was flicked on by Robson-Kanu. Williams’s run took him beyond the Blackburn back line in the inside right, and with the ball sitting up nicely on the edge of the box he elected to shoot first time and smashed it into Jason Steele’s top right corner.

And that was it for the scoring, Blackburn’s best efforts to score coming from a Fode Koita free header in the first half, and a Hope Akpan thunderbolt just before half time, while in the second half Rovers were prevented by a variety of combinations, Stephen Quinn recovering well with about 20 minutes left to nick the ball from Ben Marshall when the latter looked to have a clear chance, while Rhodes’s one chance in the match flew narrowly over having been given a rare pocket of space on the edge of the area.

Ultimately though, Jonathan Bond was called into any meaningful action just once in the second half as, right at the death, he made an excellent point blank save from Koita again. On the contrary, Reading looked the more likely to double their tally in the second half as Williams again and Robson-Kanu both fired potshots at Steele’s goal.

McCleary and Ola John also both tested Steele at his near post, John’s two efforts coming after stepping on the pitch just a minute before. John looked extremely lively and put in a shift befitting of a man with the right attitude after his little Twitter outburst just before the match at Hull.

In fact, it can be said with absolute certainty that each and every player put in maximum effort today, every player toiling to do the dirty work. Blackman in particular, ineffective throughout as an attacking threat and not exactly known for his defensive work, was noticeably working back relentlessly every time the ball was lost.

Ultimately this match won’t go down in history as one of the more spectacular affairs (matches at the Madejski Stadium haven’t been so far with just five goals from five matches, in contrast to the sixteen goals from four reciprocal matches!).

Instead, the spectacular occurred at half time as Tilehurst End contributor Jacob South Klein participated in the half time competition. For those that don’t watch, the idea is a competitor needs to score from the 18 yard line, halfway between the 18 yard and halfway lines, and then the halfway line. Jacob was successful with his first two efforts (just) and was happy to walk away with what he’d won at that point but was talked out of it. All I can say is Jacob, I can see why you were happy to leave at that point!!

McDermott walks away with three points on his return, and Jacob leaves with nothing.