It was a Tuesday night at the Weston Homes Community Stadium that yielded the necessary progression into the second round of the League Cup, although it's hard to shake the nagging feeling Reading took a little too long in doing so...

Steve Clarke was evidently reluctant to pick a weakened XI, with many players still bedding into their new roles and a fair few having plenty to prove after Saturday's loss to Birmingham City. In a narrow 4-3-3, Oli Norwood sat deep as a playmaker with Hal Robson-Kanu involved, as were debutants Ali Al-Habsi and left-back Andrew Taylor.

The Royals started sprightly, Nick Blackman turned into a one-on-one with less than two minutes on the clock, but Sam Walker was equal to his low effort. The early pressure was pleasing but Reading subsided into knocking it across the back-four, only creating again when Robson-Kanu turned well to pick out Blackman at the back stick, the forward spooning it over while unmarked. Untroubled at the back, Reading would see Walker deny Danny Williams' stab at goal before Orlando Sa's snapshot flashed wide after 31 minutes.

Sitting behind Ali Al-Habsi's goal, the away following saw plenty of the ball in front of them, all of which in Reading's hands, with the Omani dummying an opposition runner symptomatic of the visitors' comfort in the game. Nevertheless, chances were few and far between, and United tested Al-Habsi for the first time with a swerving effort on half-time.

Pleasingly, after the collapse at St. Andrews 72 hours previously, the Royals started the second half like they started the first. Attacks are a work in progress but there was some purpose and that's when Reading looked threatening, if only fleetingly. A smart move involving Sa and Blackman set up Stephen Quinn, the Irish midfielder able to have two bites at the cherry, but both times tamely aiming shots at Walker in the Colchester goal. However easy they looked to save, Walker was downed and eventually stretchered off after much delay.

Our League One hosts threatened after the hour mark, Al-Habsi dropping a high cross that forced Paul McShane to hack clear with the goal gaping, before Gavin Massey shot over from a good angle. United weren't that bad a side, it was just that unforced errors in their passing and control made it difficult to generate a real threat. Needless to say, a better side would probably make better use of the space given to them to counter-attack into.

The 80th minute double substitution of Simon Cox and Dominic Samuel for Sa and HRK revitalised Reading's urgency for a brief period, the younger of the forwards netting an offside goal. Ultimately, however, the Royals' fetal position of sideways passing around the box was too often recoiled into, and the full-time whistle went to sum up a worrying lack of penetration, and an even-more concerning further 30 minutes of football.

A worrying injury for Samuel led to the second stretchering-off of the evening, meaning well over two hours of football would be witnessed by an away crowd increasingly-desperate to get home. Signs were still somewhat promising, Blackman once again broke free to crash an effort off the underside of the bar and Cox headed a golden opportunity over the bar just moments later.

The second period opened with some Colchester pressure, Al-Habsi forced into saving a free-kick attempt. Frustration was growing, and one wondered whether Steve Clarke would begin to pick up the tab for Reading's incessant working around the box, a factor which contributed to the timely demise of messrs Rodgers and Adkins. In the end, ironically at peak frustration levels, the vital incision was made and Reading had extracted the win. 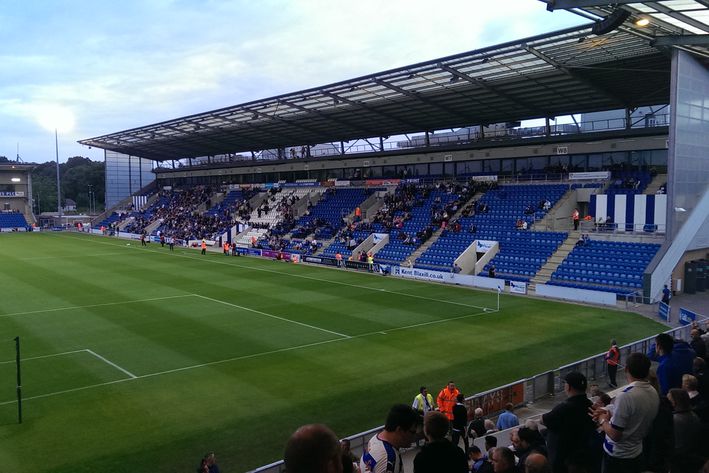 Check out how Marc rated each performance and vote for the man of the match.

Northern Irish midfielder Norwood spotted a marauding Chris Gunter, who latched onto an inch-perfect through ball to control and win the game via the far-post. Reading saw the game out with ease and the second round beckoned. A cloud of relief passed over the away end as penalties were avoided, but no one could deny Reading need to work out a better way of scoring goals in the weeks ahead, starting with Leeds United at home on Sunday.