The first home game of the new season saw two evenly matched sides finish both happy with a point.

Some matches are destined to finish goalless and this was one of those, especially after the referee bottled the decision of whether to send off Sol Bamba for denying a clear scoring chance with just two minutes on the clock. In the end both teams were relatively pleased with the result and it was always more important for Reading to not lose today rather than win.

The build up to the game had been heavily focused on Reading's co-owner Lady Sasima singing her new song before kick off. Thanks to the always painfully slow cash machine queue I missed the whole spectacle so will let others debate it, though I was told the event wasn't as bad as some feared. The same cannot be said for DJ Megaparty who may find himself under scrutiny sooner than he expected.

It was a relief, after being told to "create an atmosphere better than ever heard before", when the game finally began. With less than two minutes on the clock the first, and in the end only, real moment of drama happened. Stephen Quinn played a beautiful through ball to Hal Robson-Kanu who beat Bamba on the edge of the box. The Leeds captain mistimed his tackle and brought Robson-Kanu down.

Without the challenge the Wales international would have had a clear shot on goal which he should have scored from. It was as clear a scoring chance as you'll ever see, yet the referee amazingly only gave Bamba a yellow. The tackle wasn't malicious and for what's it's worth I'm not sure it would have made much difference to the outcome of the match. However, that's not the point. The other Leeds defenders were never close enough to stop Robson-Kanu shoot but the referee lacked the courage to make a big decision so early in the game.

The resulting free kick from Oliver Norwood was comfortably saved by Leeds keeper Marco Silvestri. United then had two chances themselves, including one after an awful miss-kick by Jonathan Bond. Luckily for the new Reading keeper, Chris Woods' shot went wide. 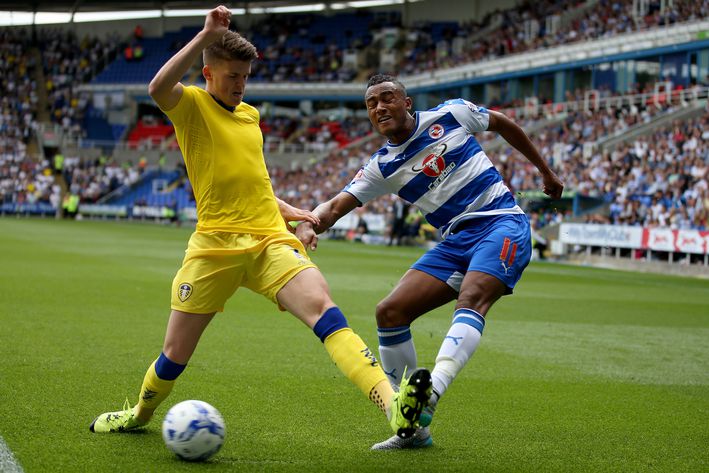 Check out how Will rated each player and vote for your man of the match.

Predictably for a Reading-Leeds game this was not a sign of things to come. Leeds were happy to get men behind the ball and let the hosts play keep ball in defence. The Royals were patient in possession but far too often found it difficult to look beyond the long ball when it came to playing through the Leeds midfield.

On 21st minute the whole stadium rose to show support for Eamonn Dolan. It was great to see Leeds fans join the home fans and this show of unity was undoubtedly the highlight of the game.

On the pitch Norwood was dictating the home side's first half play and on a few occasions nice Reading moves threatened to lead to danger but the visiting defence were never really in trouble. In fact the best chance of the half came from a self inflicted Leeds mistake. Danny Williams caught the Yorkshire side in possession but, in a two v two situation which should have led to a good scoring chance, his awful touch allowed Liam Cooper to make a simple tackle. It summed the first half up.

After last week I naturally went into 2014/2015 mode of being worried by Reading starting slowly in the second half. Seeing Leeds come out early and do a warm up only added to my fears. I needn't have worried as Leeds remained content at getting men behind the ball. Their half time change to a 4-4-2 formation nullified Norwood meaning Reading struggled to build possession.

As the second half progressed it soon became clear that the game was going to finish goalless. Reading's defence looked comfortable throughout and the only half decent chance Leeds had was down to a rare moment of indecisiveness by Anton Ferdinand and Jordan Obita which allowed Wood to fire into the side netting. It said a lot about the game that the incident barely raised a murmur from the crowd.

A similar chance for Orlando Sa likewise ended up in the side netting with the crowd again barely registering much notice. An injury time free kick from Jordan Obita forced a decent save from Silvestri and was about as good as it got in the second half. In fact it seemed for long stages that the contest had turned into a challenge for Reading to commit more silly fouls than they did at Birmingham. For the record they succeeded by three and now proudly sit top of the Championship foulers league.

In truth this was a poor game as Reading-Leeds clashes nearly always are. Both teams looked solid and on this evidence won't trouble either the play-offs or relegation zone. Leeds were happy to come away with an away point whilst after losing on the first day of the season it always felt like the main priority for Reading was to get at least a point.

Given the negativity that would have come from a second league defeat in a row it is hard to feel that Steve Clarke got his approach wrong. Reading never really looked like scoring but nor did they look like conceding. From last season that is a sign of progress. It's been a long time since we've looked so secure in defence. With no explosive players available it wasn't not too much of a surprise that we didn't look threatening going forward.

With players to return from injury and new signings coming in it is far too early to be getting too concerned about the lack of an attacking threat. Steve Clarke is having to change a playing style that has barely evolved in a decade. The last manager who really tried doing that was sacked after less than six months in charge for making us too easy to beat. Clarke's methods may be less pretty on the eye but on the evidence of today Reading are at least becoming harder to beat.