A goalless draw at the Madejski Stadium may not live long in the memory but which players can be happy with their performance? Here's how we rated the players:

Excellent handling but once again his kicking left a lot to be desired. Stays much closer to his line than Adam Federici which may be why I don't feel he yet matches the Australian for reassuring presence. He is perhaps the team personified: a work in progress who needs us to be patient.

Once again never looked troubled defensively and only misses out on a seven because I felt he could have got forward more. Has started the biggest season of his career well.

Alex Pearce who? Not since Ívar Ingimarsson have Reading had such a calm and collected captain at the heart of the defence. Had a good tussle with the physical Chris Wood and on the few times he was beaten the defence was so well organised it didn't matter.

It is fast becoming clear what a big loss he was last season. Like McShane was never ruffled and good on the ball. Michael Hector may find it hard to get back into the team but there aren't any better centre backs in the Championship he could learn from.

Big improvement from Obita. He was so good defensively it is hard to remember the highly rated Sam Byram touching the ball. Also attacked well and forced a decent save in injury time with a well struck free kick.

Got better as the game went on. His workrate can never be questioned and it's obvious that he's very much doing a job for the team at the moment on the occasions during games when he lines up on the right wing. Only gets a five because there were two moments when his poor play meant promising attacking situations broke down without Reading even getting a shot on goal. The incident in the first half was particularly bad and would have led to all kinds of criticism if Blackman or Robson-Kanu had done it. He will play better. 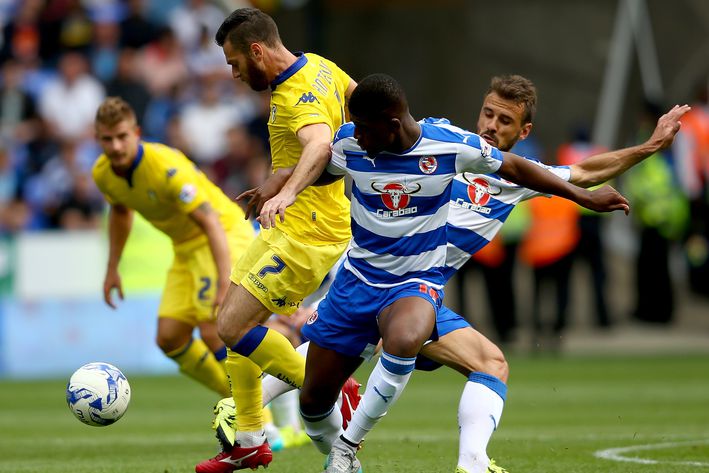 Read our match report on how the Royals gained their first point of the season.

Probably Reading's best player in the first half which Leeds recognised by changing their formation so they could nullify him. A big compliment but it did mean the second half largely passed him by. The rumours linking him to Sheffield United do him a disservice, he's too good for League One.

Again slightly struggled to get in the game but at times in the first half there was evidence of why he was so coveted this summer. His pass in the second minute for Robson-Kanu was superb. Like Williams I am confident Quinn will get better as the season goes on.

Faded as the game progressed but so far this season he has been far less anonymous than he has regularly been during his Reading career. Worked hard, which is not a trait usually linked with him.

When Sa was good Reading were good. His link up play impressed again and he looks a more fluid mover than Pogrebnyak. Finally had a shot from open play which he may feel he could have done better with.

Effectively the second friendly of Robson-Kanu's pre-season. One stinging shot in the first half but he continues to look like a player who is frustrated with himself. His covering for Obita in the second half on a rare Leeds counter attack meant the ball didn't even enter Reading's box from what could have been a dangerous situation. It showed how hard he works for the team and why despite the majority of Reading fans not rating him so many managers do. Managers remember incidents like that whilst fans instantly forget them.

Slightly surprising change when most fans probably expected a more attacking one. Tshibola gave the midfield some fresh legs and once again looked very comfortable in possession.

Didn't really have time to make an impact.

Brought on with minutes to go to provide aerial presence for any potential injury time set pieces.