@WilliamOwain gives the players their first ratings of the season after a promising display at St Andrew's.

Confidently took crosses throughout the game and had no chance with either goal. His distribution from his hands was excellent but his kicking, particularly on his weaker foot, left a lot to be desired. It was noticeable on a few occasions that the players had lined up too high up the pitch anticipating an Adam Federici long kick. Did enough to justify being selected ahead of Ali Al-Habsi.

One superb saving interception in the first half saved the centre backs. His cross for Blackman's goal was inch perfect and an example of his constant willingness to support attacks. Seeing him getting wound up by the Birmingham players after the first goal was amusing though a little worrying as he looked ready to hit someone.

Overall a decent performance including plenty of excellent tackles. His ability on the ball is better than many Championship midfielders and certainly helped Reading launch attacks in the second half. Sadly he was once again caught out and his carelessness helped cost the game.

Clearly loves a header and twice went close to scoring. Had a good tussle with Donaldson and looked decent if unspectacular on the ball. Looks an upgrade on Alex Pearce but also that he has a mistake in him. Maybe could have been tighter to Jon Toral for Birmingham's second goal.

Far too wasteful on the ball in the first half. One very sloppy moment after the break led to a decent Birmingham chance. Poor control also led to a promising attack breaking down. Overall Obita will know he can and has to do better especially with Andrew Taylor breathing down his neck.

Clearly not comfortable playing out wide which strangely seemed to lead to him to be one the more guilty players when it came to slowing down the tempo in the first half. Improved massively in the second half and showed the qualities that make him a fans favourite. Came close to scoring and his link up play with the strikers was encouraging. 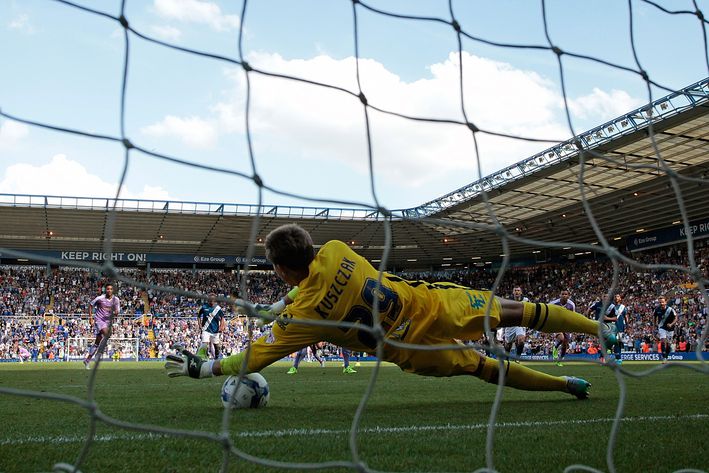 Relive the action in our match report of an unlucky defeat at St Andrew's.

On this evidence Tshibola will definitely be ahead of Hope Akpan this season. Another academy graduate who has great technique. Tidy in possession if a little bit too cautious at times. Grew as the game went on and almost scored a spectacular equaliser.

Throughout the game his set pieces caused Birmingham problems. At times he ran the game and it was good to see him play at a higher tempo than he often did last season. Hopefully this was a sign of him rising to the challenge of new and better competition.

Had a quiet game. Worked hard and looked good on the ball apart from one attack in the first half when he dilly-dallied when he should have crossed. There's more to come from him.

Last week was the first time I had seen Blackman close up and I was surprised by how big and imposing he was. This was a game when he used that physique to effect. He held the ball up well and showed promising interplay with Orlando Sa and supporting midfielders. His headed goal would have made Jimmy Quinn proud. It was a shame he got injured not least because his amazing penalty record probably would have seen him equalise.

Every good attack seemed to involve the Portuguese. Created a few chances and the only real criticism was that he didn't manage a single shot in open play. And then there was that penalty.

Didn't really get a chance to make an impact. Did force Kuszczak into a save from a shot just outside the box.

In his short spell on the pitch he seemed to play up front, on the wing and in attacking midfield, which as a sign of Reading being more flexible going forward was good to see. Good late run to win the penalty. Not sure whether it was him or Sa who was to blame for the argument on who would take the penalty.

Only briefly on the pitch but still had time to launch the attack which won the penalty.