The Royals kicked off the new season at a sunny St Andrew's but despite an encouraging performance were to leave pointless. @WilliamOwain brings us his match report.

Zombies in Victoria Square, men levitating on New Street and Reading avoiding defeat after going two goals behind at St Andrew's. Sadly only two of these unlikely sights took place in Birmingham yesterday.

In the same way I'm still wondering how those men were levitating, Reading fans will this morning still be puzzled as to how their team didn't win let alone draw. That they didn't was down to bad luck and a familiar deficiency. In the long run it might be a good thing that there was a dose of realism to go along with all the promise and positivity that we witnessed.

The big questions before kick off were who would start in goal for the Royals, who would be the new captain and just how bad is the new away kit. The latter question can probably best be answered by me never noticing it during the game. It's a cheap looking colour and kit design which will probably be long forgotten in a few years.

The more important questions were answered by Steve Clarke's team selection. As I expected Jonathan Bond was selected ahead of Ali Al-Habsi and he ended up putting in a promising display that still left enough for me to think we might come to realise how lucky we have been with Marcus Hahnemann and then Adam Federici. Paul McShane was chosen as captain which also meant he started ahead of the perhaps unlucky Anton Ferdinand.

Apart from those two decisions there was no surprises in the Reading starting line up, though it soon became clear, that unlike in pre-season, it was Nick Blackman and not Danny Williams who was supporting Orlando Sa who was the lone striker. This meant the Royals had two players, Williams and Stephen Quinn, playing out wide who are more comfortable through the middle. This not surprisingly meant Reading often lacked width in the first half.

Despite that they had the better of possession and territory. Birmingham were restricted to playing it long up to the impressive Clayton Donaldson, who troubled Michael Hector and McShane throughout the game, and showed why Reading had tried to sign him earlier this summer. The Royals looked comfortable in possession and it was encouraging to see how often Sa was involved in the build up.

After just four minutes a neat Reading counter attack and a dangerous run from the debutant striker led to a free kick on the edge of the box. Oliver Norwood stepped up and beautifully struck the ball, giving Tomasz Kuszczak no chance, only to see it hit the bar. The Northern Ireland international went close with another free kick ten minutes later but despite some good passing moves the Royals hadn't really done enough to deserve a half time lead.

Few would have disagreed with a level scoreline at the break but that was not to be the case when Birmingham took a fortuitous lead five minutes before the break. A clumsy foul by McShane on Donaldson gave free kick expert David Cotterill the chance to see if he could outdo Norwood. His attempt hit the wall but the deflection redirected the ball past a despairing Bond.

It may have been an undeserved lead but Reading looked rattled. Cotterill went close again and Reading had clearly lost their way which meant the half time whistle was welcome. A half-time chat with fellow Tilehurst End editor Marc Mayo led us, like probably most fans, to agree that Reading had to up the tempo and get more width to get back into the game.

The home side were the first to reappear before the restart whilst Reading slowly walked back onto the pitch. This lackadaisical approach continued as far from upping the tempo Reading seemed to play even slower. Last season we were by far the worst team when it came to the 45th to 60th minutes, conceding 19 goals which was four more than the next worse team. I said many times last year that something needed to be done about it and sadly I was once again proven right.

Whilst Reading were trying to get back up to match speed, Birmingham won the ball back when Donaldson disposed the careless Hector who probably had an instant flashback to the Gold Cup when he made a similar mistake. Donaldson looked up and played the perfect cross to Jon Toval who had evaded McShane to head past Bond. Recent history suggested game over. It was a bad goal to concede and Clarke needs to sort out this problematic slow start to second halves.

Just like the opener Reading reacted badly to conceding a goal but an average Birmingham team were unable to gain enough momentum to get a third. Instead Reading slowly got their rhythm back.

Norwood began to dictate the game and Reading were able to get Williams into more central areas whilst Blackman and Sa continued to impress with their link up play. The Portuguese striker was at the heart of every attack and it was good to see a Reading striker having teammates supporting him leading to the unique sight of Reading attacking through the middle.

Williams went close before a Sa break down the wing led to the American international forcing Kuszczak into a save. The always energetic Chris Gunter got to the rebound first and superbly crossed for an equally impressive Blackman header to pull one back. 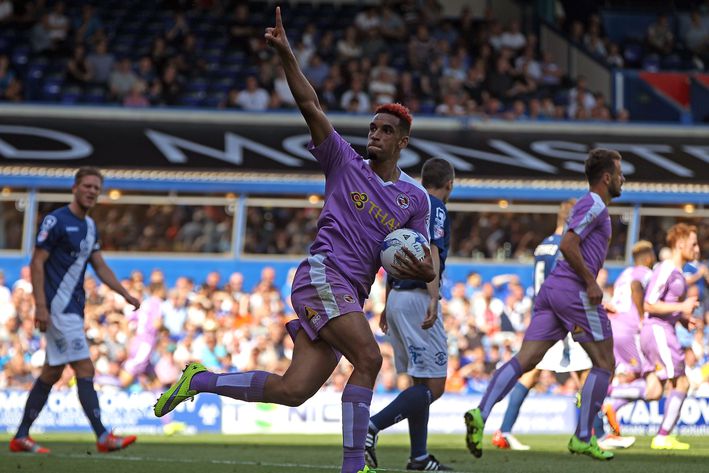 Check out how Will rated each performance and vote for the man of the match.

This led to a sustained period of Reading dominance and it seemed only a matter of time before they equalised. One of many clever set piece routines found McShane at the back post. Reading's new captain looped a header over Kuszczak only for it to hit the bar. Minutes later Aaron Tshibola won the ball on the edge of Birmingham's penalty box and struck a shot with real venom that rebounded off the bar and onto the line. It all happened so quickly it was too hard to see if it crossed the line but the match highlights suggest Reading may have been robbed.

By now Gary Rowett's team were worried. Defensive substitutions and time wasting had their desired effect and took the sting out of Reading's attack. Instead it was the Blues who almost scored but Gray missed when he maybe should have done better.

Just as is it seemed over the Royals broke with substitute Dominic Samuel. He played a lovely ball, that was excellently left by Williams, and fellow sub Simon Cox was bundled over. What ensured should never happen let alone in injury time.

Cox and Sa had a lengthy discussion on who would take the kick. Sa won the argument but meekly missed. Even then the hapless Kuszczak almost again gifted the Royals a goal but this time the Pole just did enough to force Cox to put the ball wide.

There will be lots of talk about how Sa missed but I think that's largely academic. No one complained when Gylfi Sigurdsson famously scored a similar penalty against Liverpool and no one is telling me that Pavel Pogrebnyak's driven penalty miss at QPR in 2012 in the League Cup was a better way to miss. A penalty miss is a penalty miss. My grievance is over Cox and Sa's "discussion." There have been far worse similar incidents but I believe it only adds unnecessary pressure on the taker.

It was an unfortunate end to the game. Sa sulked straight off the pitch which was a shame because he should be pleased with his overall display and like the rest of the team deserved to be applauded. I don't think he should be criticised either. He probably wanted to have a quiet moment of anger at himself.

Oddly Reading fans probably left St Andrews as happy as their Birmingham counterparts. This was a very encouraging display from the Royals. Some of their passing and attacks in the second half were of the sort we have badly missed for a long time now. The players passing and moving was far better than last season and apart from three occasions Reading were never really threatened in defence.

Despite this it should be said that Birmingham were not at their best. I was surprised how much they stood off the Royals. Reading should have at least drawn but that they didn't is perhaps a sign we'll need to be patient with a team that is a work in progress.

Click here for Will's Player Ratings from the game and the chance to vote for YOUR man of the match.