After going 10 hours without scoring a goal the Royals blitzed an Ipswich Town team who started the game in third place. Here's our match report where we struggle to contain our excitement.

They say goals are like buses. You wait for ages for one and then two come at once. Well the Reading bus has been a long, long time coming, and after some major investment in a new fleet, the shiny new buses all arrived at once. All five of them!

It was a real statement from Reading and left fans feeling very excited for the rest of the season. This game may be looked back at the one where the Royals really started to believe and show they could mount a challenge for promotion but it would be easy to forget that they did not have it all their own way for the first hour of the game.

The build up before the match had been dominated by the debate on Steve Clarke's team selection. Never before at Championship level has a Reading manager had so many options to choose from. In the end Clarke started just one of the late transfer window signings, Czech international Matěj Vydra, who came in for Hal Robson-Kanu. The only other change from the team who beat Brentford saw Aaron Tshibola, celebrate his new contract with his fourth start of the season, ahead of Danny Williams who had only returned from international duty the day before.

The pre-match excitement amongst the Royals faithful was palpable and only intensified after the Royals started the game in a blitz. Just six minutes was on the clock when Jonas Knudsen carelessly gave the ball away to Vydra. The loanee from Watford played the ball to Tilehurst End Player of the Month Nick Blackman, who teased Knudsen, before whipping the perfect cross for the on running Orlando Sa to nod home. The goal finally brought a painful 10 hour wait for a home goal to an end.

Reading threatened again but just when it looked like they were turning the screw the Tractor Boys drew level. An Ipswich counter attack saw the Reading defence at sixes and sevens. McShane won the ball but gave it straight to Brett Pitman. Pitman played the ball to Ryan Fraser who turned McShane and then Gunter in knots. Bond saved his shot but the lively Freddy Sears tapped home.

The goal was very unlike Reading who up until tonight have looked very solid in defence. Clarke will no doubt sit the defence down and it is a warning that past form counts for little in the Championship. Luckily Reading didn't have too long to dwell on the equaliser. Just three minutes later a devastating counter attack started by Oliver Norwood, continued by Vydra, saw Sa get his second with a lovely drive from the edge of the box. Whisper it quietly, but it was the exact sort of goal that Kevin Doyle would regularly score in the 2005/2006 season.

The game was end to end and the sort of match that sees commentators say "this is a great advert for the Championship." Reading's front two of Sa and Vydra were linking up well while Stephen Quinn was having his best performance since joining the club. Blackman looked dangerous every time he was on the ball and had clearly been given a license to roam by Clarke. 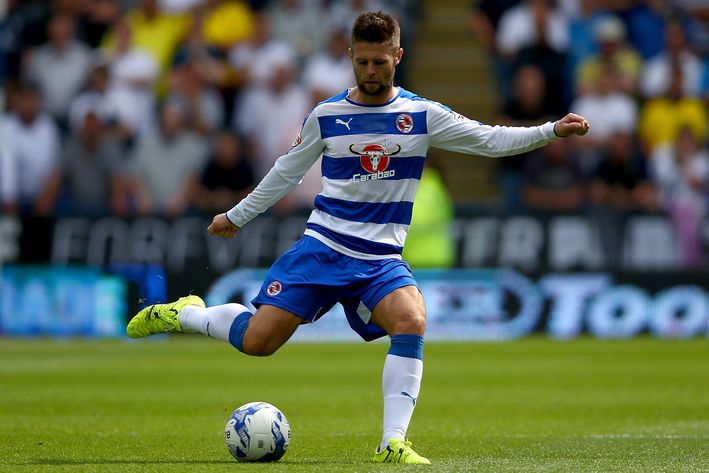 See which players got the most plaudits and vote for YOUR man of the match.

As exciting and dangerous as Reading's counter attacking game was it also left them open. Blackman and Quinn offered little support defensively to the full backs and at times Reading's formation looked like 4-2-4. This left a lot of work for Norwood and Tshibola to do, and with McShane looking out of sorts, Ipswich caused problems. Sears had a good chance that he may have felt he could have done better but Bond was quick off his line to save McShane, who had once again been turned.

An early Ipswich chance highlighted the difficulties Reading were having with dealing with the long ball. A simple long ball from the goalkeeper Dean Gerken flicked on by David McGoldrick saw Pitman come close. He was to rue that miss as another counter attack soon after saw the Royals extend their lead. Great buildup play between Blackman and Sa should have seen the striker get his hattrick but he miscued.

The Ipswich defence made a complete meal of clearing the ball and gifted it back to Blackman just inside the box outwide. Luke Chambers became the second Ipswich full back unable to stop him as he powered home a shot from an angle that gave Gerken no chance.

Ipswich were not out of it though as Pitman hit the bar with a header. In the ensuing melee Tshibola was maybe a little lucky to not give away a penalty. However, just like with the third goal Ipswich were to regret not scoring. Reading won the ball back on the edge of their box and Norwood played one of the passes of the season to set Blackman down the wing. He still had much to do but surprised Knudsen, by going on his right foot for the first time in the night, to play a ball across the goal for Sa to clinch the first hattrick in the Championship this season. Game, set and match!

The goal took the sting out of Ipswich and the Royals never really gave the away side another chance in the remaining half hour. Clarke used Reading's dominance to give home debuts to Lucas Piazon and Ola John, and the two substitutes were involved in the icing on the cake. Another piece of careless play from the visitors saw the new signings play in Norwood who hit an unstoppable shot from 30 yards. The Reading FC goal of the season may have been decided.

This was a dominant display from the Royals and one not seen since the first half of the 2008/2009 season when Steve Coppell's side looked like it would win promotion back to the Premier League at the first time of asking. It was as good as display seen this decade. Fans may point back to the high scoring wins under Nigel Adkins against Blackpool and Bolton Wanderers but those were against two feeble teams. Brian McDermott's teams had some memorable wins but never in the manner of tonight.

So there is a lot for Reading fans to get excited about. We looked dangerous every time we went forward. The defence was not at it's best but for most of this season it has been excellent and it should be remembered that Ipswich were third coming into the match and had scored 10 times in five games. Of course it has to be mentioned that Ipswich were poor by their standards but Reading were ruthlessly clinical. This was a real statement from Reading and a performance that will be tough to live up to, but when you look at the quality of players not used tonight it is hard not to feel we could be on to something special this season.