The Royals made hard work of a victory over The Robins in their first game of 2016 but it was in many ways a typical Brian McDermott performance.

In many ways, Matej Vydra was the epitome of Reading FC's performance against Bristol City this afternoon. Lively, lots of huff and puff but very little action in front of goal — until one last push sees Nick Blackman provide the finishing touch to a counter attack.

The Royals went into this game on the back of a terrible 2-1 defeat to Brentford in their last game but many fans were hoping a new year would mean a new team. Unfortunately, it looked like it was to be a case of new year, same old Reading as they made hard work of earning three points over 22nd placed Bristol City.

Brian McDermott made five changes to the team that stunk the place out against Brentford, with Al-Habsi, Cooper, Taylor and Vydra all starting, in a side that looked remarkably similar to the one that hammered Ipswich Town way back in early September.

The game started with Bristol City sneaking in an early shot, before going on to dominate the opening stages with a series of rapid counter attacks through Wilbraham and Kodjia up front. McShane and Cooper looked shaky in the opening exchanges but — Cooper in particular — grew into the game. It seemed The Royals were struggling to come to terms with Bristol City's unusual 3-man defence in the early stages, with not much happening when they advanced into the final third.

Vydra was making himself known on the pitch, displaying what must be lungs of steel with intense pressure but, sadly, not his famous finishing touch as he conspired to miss two or three glorious chances to put The Royals in the ascendency, missing with a half-volley when played in on goal by Quinn and having a shot saved by opposition goalkeeper Fielding's legs.

The half was to finish with McDermott forced into a defensive reshuffle, captain Paul McShane seemingly twanging his calf and being replaced by the recently returned Anton Ferdinand alongside Jake Cooper.

City were also forced into a defensive change before half time, Moore replacing Baker in defence.

The half drew to a close with many fans frustrated at the lack of goalmouth action, especially as Nick Blackman had twice tried to play a simple ball in to the overlapping Gunter and twice failing.

Reading started the second half slowly, giving away a free kick which was skied over by Pack and relying on Norwood to make a fantastic challenge as Kodjia tore up the turf on his way to what looked like a great goalscoring opportunity. 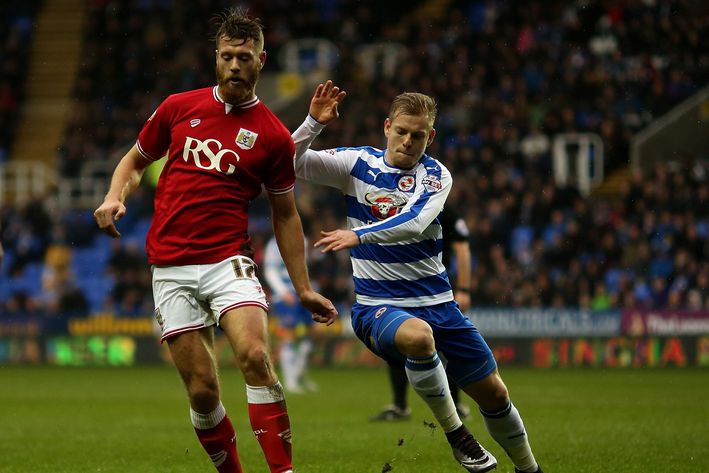 Reading got the three points in the dying minutes of the game, but did any of the players impress?

Reading's first attack of the half came on the counter, with Sa and Williams having shots from the edge of the area blocked after a Quinn cross was punched and Norwood blazing over the bar.

The game changed in Reading's favour when Brian McDermott brought on Garath McCleary for the ineffective Sa, shifting Blackman into the middle alongside the lively Vydra and reuniting the McGunter partnership down the right hand side which has been so effective in the past.

As soon as that change was made, the home side started hitting the right hand side regularly and McCleary had a few good runs and crosses that weren't read, were too powerful or simply missed. Norwood was having a wonderful time in the middle of the park, preventing another Kodjia attack and then pinging the ball to the wide areas. Hal Robson-Kanu was introduced as an attacking change for Taylor, Quinn shuffling to left back as McDermott went for the win.

It looked to be a case of same old Reading as they again struggled to score against a visiting team that packs its defence, only for Vydra to track back into his own half, win the ball and instigate a sweeping counter attack that resulted in McCleary playing in Blackman, who cooly slotted his shot in the bottom left corner to kick start The Royals' 2016 with three points and the return of Brian McDermott's famous last-minute winners.

After the Brentford defeat, Brian McDermott spoke about wanting to find an identity for the club and to make the team the main focus. He has a long way to go, but this performance hinted that he has at least begun to find something promising out of the darkness of Clarke's final days. Winning ugly is better than drawing beautifully, and that's something McDermott's sides became famous for in his first stint at Reading. Here's to many more.