Can history give us any pointers to the outcome of tonight's game between Leeds and Reading?

Share All sharing options for: The Oppo: Leeds United

Having gained their sixth win in seven, Reading face the long trip to the biggest club in Yorkshire on Tuesday night with a visit to Elland Road, a venue which the Royals have a decent recent record.

As you would expect for a club that boasts such a distinguished history at the top level of English football, Leeds and Reading have met on just 20 occasions. It is the Yorkshiremen who hold the slightly superior record between the sides with seven victories to the Royals’ five.

The record is skewed in United’s favour somewhat by the four Leeds victories in the first six matches, two in the 1920’s and four in the 1980’s, however since acquaintance with Leeds in the Madejski Stadium era commenced the record slews back slightly towards the Royals, with four victories to United’s three. Those four wins, however, came in 2011/12 and 2013/14,both seasons in which Reading completed doubles, meaning despite Reading holding the slight upper hand since 2004, there have been five seasons out of seven in which Reading haven’t beaten Leeds.

At Elland Road Leeds hold the superior record, but since 2004 with the sides competing on more even ground both sides have triumphed twice, there have been three draws, and both sides have scored nine goals. Literally, honours even.

Saturday 15 April 2006. Reading, already promoted as champions, travelled to Elland Road to face a Leeds United team that still harboured faint hopes of reeling in Neil Warnock’s second placed Sheffield United. The match proved to be a tough test for the Royals, whose solitary aim left for the season was to remain unbeaten and break the record points total.

While Reading went into the game in the form of their lives, just the two defeats in 42 to date, Leeds were staggering to the season’s end. Indeed, their goal on 47 minutes was the first they had scored from open play in nine and a half hours, and their first goal of any denomination in four and a half matches.

The second half started with my brother and I not even realising the second half had started, quietly supping our beers at half time before the ominous noise of the celebrating home rendered termination to our beer drinking exploits and a quick dash back up into upper echelons of the Cheese Wedge. Fellow supporters informed that it was Rob Hulse who tucked home a close range effort after enterprising play on the left wing by Shaun Derry.

The game opened up from that point, Reading licking their wounds. Perhaps in mid-season Reading would have just gone up the other end and immediately responded as seemed to be their way (Derby, West Brom, Palace and Sheffield United all felt the wrath in this manner) but Leeds had the bit between their teeth, and with Reading struggling to make an significant inroads to the Leeds goal it was Leeds that looked the more likely. A David Healy effort from distance dropped just wide of Hahnemann’s right hand post, while Rob Hulse was played through once again by the industrious Derry only for Hahnemann to produce an excellent smothering save.

Despite the lack of clear cut chances there was an air of simple, Steve Coppell inevitability surrounding the equaliser. In 54 league and cup matches Reading failed to score in just four of them (and if you’re interested, those matches were the two goalless draws with Watford, a goalless draw with Southampton and the League Cup defeat at Arsenal).

The goal itself was manufactured in Iceland and finished in Ireland. After heavy pressure, a deep right wing cross from Gunnarsson was met at the far post by the Icelandic salmon himself, Ivar Ingimarsson who nodded back across goal. There, lurking, was Stephen Hunt who bundled home under pressure from countryman Gary Kelly.

The draw, while a slightly underwhelming performance, was a creditable one. Leeds finished the season fifth, and defeated Preston in the playoffs, which in itself was an excellent achievement given PNE’s achievement in only suffering four defeats in the regular league season. Their fate in the final was to suffer at the hands of Watford, a 3-0 defeat at the Millennium Stadium rendering Leeds to another season in the Championship. Failure to gain promotion was critical, as United entered administration the following season and finished bottom.

They Played For Both Teams

Wear a Reading shirt with the name “Harte” on the back in and around Leeds, the likelihood is you’ll very quickly have broad Yorkshire accents making your friendly acquaintance about a player whose left foot was capable of the quite spectacular. In fact, the Irishman’s left foot makes it into The Tilehurst End’s Frankenstein Reading player with his left foot, and while there is ample competition from the likes of Nicky Shorey and another former Leeds player in Dylan Kerr, it is difficult to argue against his inclusion in such an accolade. 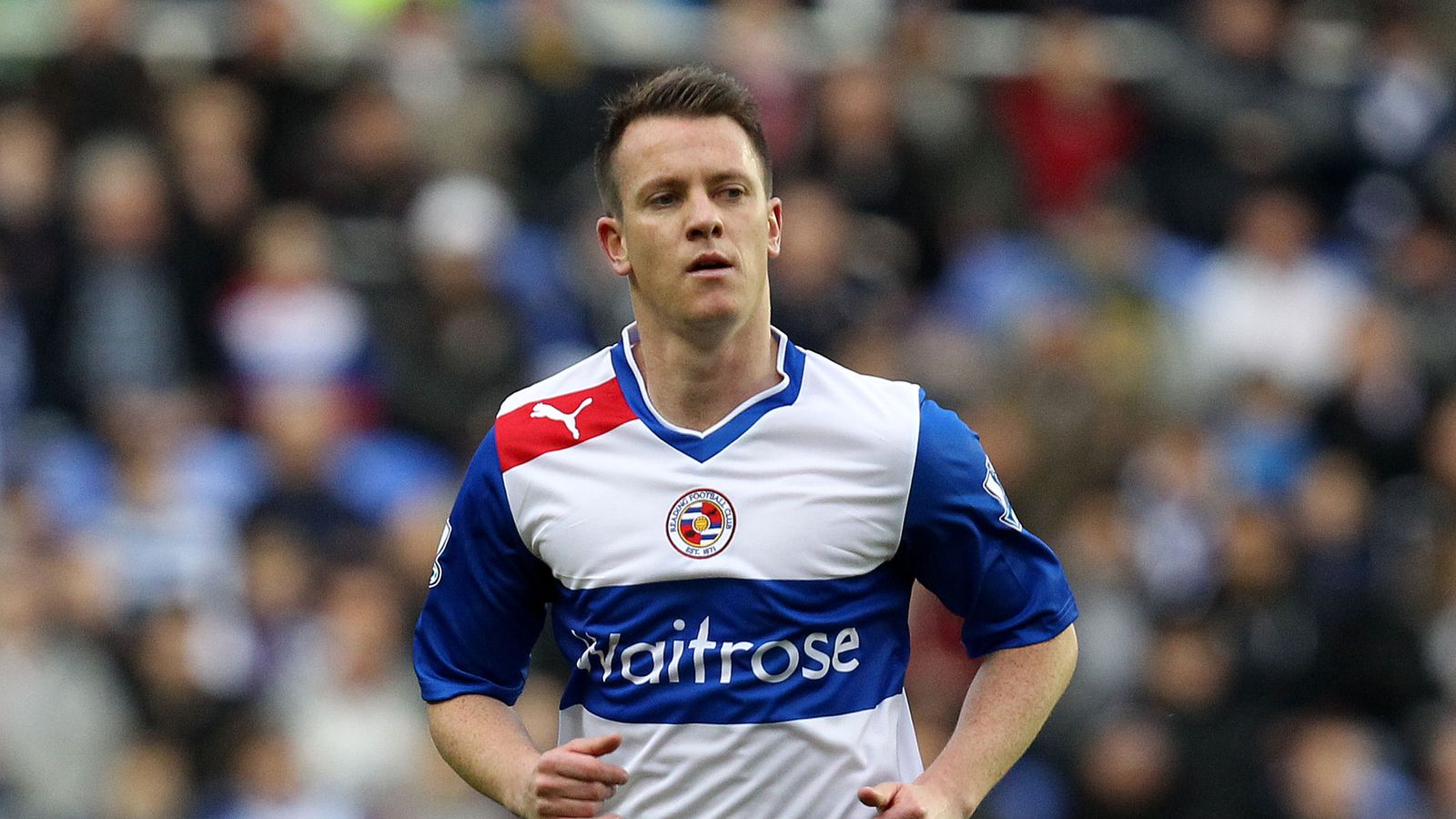 If you had to build the perfect Reading footballer Frankenstein style, which parts would you choose? Starting with the left peg.

Harte commenced his professional career in Leeds, joining from Dublin-based club Home Farm in 1995, and he went on to spend nine largely successful years in Yorkshire, playing alongside his uncle Gary Kelly. Harte would play an integral role in United’s march to the UEFA Cup semi final in 1999/2000, while the following season he excelled in the Champions League, scoring a trademark free kick against Deportivo in the quarter-finals. The final two seasons, however, were a downward spiral, culminating in United’s relegation to the Championship in 2004 in the midsts of huge financial trouble thanks to the financial mismanagement of Peter Ridsdale, and Harte was released having played 288 matches and scoring 39 goals.

After time in Spain and various clubs back home, Brian McDermott offered Carlisle an “undisclosed” sum of money to tempt him south to Berkshire after 67 Cumbrian appearances that yielded 21 goals.

In was no coincidence that Ian Harte’s efforts in Berkshire assisted immensely to the success of one of the most successful periods the club has seen, his 11 goals aiding a fifth placed finish in 2010/11 and a playoff final defeat to Swansea City (during which the player’s one weakness was cruelly exposed by the likes of Sinclair, Borini, Dyer and Dobbie). And while such a humiliation on one of the world’s biggest stages may have done for some players, Harte came back stronger the following season, seeing off admittedly limited competition from Joseph Mills as McDermott sought a formula that bred regular victories. In the end, Harte’s four goals and eight assists (which would have been even better had he scored the two penalties that were saved) proved invaluable as the Royals won 16 of 22 matches in 2012 to steal the title from Southampton and West Ham. Sadly, after the financial mismanagement of TSI, the Premier League season was a disaster for all concerned as Harte was in and out of the side, although he still made 16 appearances in the league. Despite this, Harte left Reading with nothing but the utmost respect from Reading supporters after 99 appearances in all competitions that yielded an impressive 15 goals.

The final chapter in Harte’s career came down on the south coast and two years at Bournemouth, where his first season would see the Dorset club enter a late but failed charge for the playoffs, before contributing to the club’s best ever season, ending the season with a second Championship winners medal in four years.

Since retirement, Harte has turned his hand to that of a football agent, and resides once more in Yorkshire.

January 1996, back in the days when Reading were a small cog in the Division 1 wheel and Leeds were amongst the best teams in the country in the division above. The Coca-Cola Cup 5th round tie at Elland Road was a big day for Reading, who had dispatched West Brom, Bury (memorably having been 2-0 down before the Gods shone their liquid sunshine on Elm Park, the rematch being won 2-1), and Southampton while for Leeds it represented a significant sniff of silverware having been dealt what on paper looked the easiest draw.

In the buildup to the match Reading suffered huge goalkeeping trouble with Simon Sheppard, Bobby Mihailov and Nicky Hammond all nursing injuries, and so an emergency loan was arranged with Tranmere for Eric Nixon on the morning of the match.

The match itself? Well Reading should have won. Jimmy Quinn’s instinctive and powerful strike gave them a deserved lead, but a Gary McAllister free kick (which was never a free kick – look at it) led to Phil Masinga knocking home, and then the killer blow as Gary Speed nodded home into an unguarded net after Nixon had come haring off his line in a futile attempt to claim a right wing cross.

The grudge? Leeds drew a seriously faltering Birmingham in the semi-final (and comfortably beat them) before succumbing limply to a 3-0 defeat to Aston Villa in the final. The feeling is that Reading would have put up more of a fight than Leeds did that day, and perhaps with a bit of luck may even have come away with the trophy. Wishful thinking? Perhaps, but another one of those opportunities that got away.

As for Nixon, well he turned up two hours before the match, dropped his clanger, got changed post match and drove off on his merry way, never to be seen again. Cheers for that then, mate.

Yorkshire’s biggest professional club is in fact one of Yorkshire’s youngest. Leeds United were formed in 1919 after financial irregularities put paid to the city predecessor, Leeds City FC, who became the only Football League club to be expelled partway through a league season (Port Vale took their place, and took their results to that point).

As a result, Elland Road has been the club’s only ground. It was originally known as “The Peacock Ground”, due to the original owners of the ground, Bentley's Brewery, owning a pub named 'The Old Peacock' which still faces the stadium. Therein lies the history of one of the club’s old nicknames, “The Peacocks”.