Reading FC Tactics: Why The Defence Is Still A Cause For Concern

In the second part of our look at Jaap Stam's tactics we look at the defence and why it might be Reading's achilles heel.

Share All sharing options for: Reading FC Tactics: Why The Defence Is Still A Cause For Concern

In my first article looking at Jaap Stam's tactics I highlighted how attacking he has been in pre-season. In every friendly he has set his team out in a traditional Dutch 4-3-3 formation, but such has been the attacking intent of the attacking central midfielders the formation has often had more resemblance to the 1930s W-W formation.

This positivity has seen Reading getting lots of bodies in the box, pressing high, and providing outlets for when the defence and holding midfielder have needed to go long.

I gave plenty of examples of Reading's "five forwards" being high up the pitch when the ball was in the opposition's half. The below picture shows this with Reading building from the back, this time against Wimbledon.

As you can see Oliver Norwood is on the ball and has Tennai Watson in close support. Jake Cooper is in the top left of the picture inside Reading's box. Jordan Obita is almost parallel to Watson on the left wing.

What is noticeable is how the only other Reading player in the picture is Joey van den Berg (purple) who is on the halfway line. Norwood is the only midfielder giving an option to the defence.

This can have two consequences. One is that the defenders, and the holding midfielder, have a huge responsibility at being able to start attacks.

The centre backs have to be comfortable at carrying the ball long distances, passing short and long. It's why Jaap Stam experimented with van den Berg at centre back against Bournemouth.

Cooper and Paul McShane are both perfectly competent on the ball, but they maybe be too similiar to work together. It explains why a centre back seems to be the next priority in the transfer market. 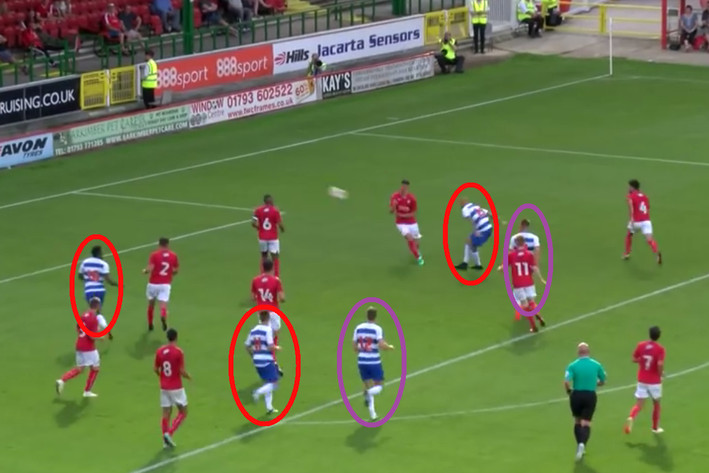 In the first of our articles looking at Reading's tactics, we analyse how Jaap Stam wants Reading to attack.

The other consequence of having such a gap between defence and midfield is that if the opposition win the ball in Reading's half then the attacking central midfielders may be in no place to help the defence.

The picture below shows the same problem when the opposition counter attack from their own half. The image is from the Boreham Wood friendly and the ball has actually gone out of the picture, but you can see everyone running back to the Reading goal. George Evans is so far forward he's also not in the picture, while Danny Williams is further forward than both wingers.

That has effectively left Liam Kelly as Reading's only midfielder and even he is a long way from the defence. That big yellow area is not a good sign. No one is protecting the centre backs or able to pick up the second ball.

The same thing occurred in the game against Bournemouth. Heaven knows what van den Berg, player circled in blue on the left, is doing but the other players' positioning is hardly much better.

McShane, the other player in blue, is very deep but does have the support of two full backs. Kelly, the player circled in yellow next to van den Berg, is again very far from the defence, and the attacking central midfielders are nowhere to be seen.

Those two examples show how much space the opposition can get on the break. The next example shows Reading defending from the edge of their own penalty box and again it is noticeable how little protection is in front of the defence.

The attacking central midfielders (purple) are once again very high up the pitch considering Reading were defending. The distance between them and the defence is covered by Tarique Fosu (red) dropping deep on the right wing, and Obita (bottom yellow) stepping up.

Only Norwood (central yellow) is defending the central area in front of the defence, but there is still a Wimbledon player between him and the centre backs.

The potential problem here is that if a full back is having to step up you risk leaving a space for the opposition to attack. The same thing can happen on the counter attack. If the holding midfielder is the only player helping the defence then a full back may feel he needs to step forward to help him. That again though risks leaving space down the flanks.

That is exactly what happened for Wimbledon's second goal. The Wimbledon winger dropped deep to play to play a simple pass backwards but Tennai Watson had pushed up to close him down. The Wimbledon player who received the ball played into the channel which Watson had vacated, and the attacker turned McShane into knots before scoring.

The goal wasn't Watson's fault, but it highlighted how Reading's attacking intent is leaving their defensive players with a lot of work and tough decisions to make. It is why Stam has followed one of his predecessors, Steve Clarke, in telling his full backs to be cautious with forward runs.

This is an increasing aspect of the modern game that is rarely commented on by pundits. We are so obsessed with gung-ho full backs, and take modern footballers' athleticism for granted, that it seems to have gone unnoticed that full backs are often now being reminded that they are defenders.

Reading's Chris Gunter was a perfect example of this for Wales in Euro 2016. He and Neil Taylor did get forward, and when they did they produced some of the most memorable moments for Wales, but first and foremost they defended. It cut of their opponents chance to counter attack down the flanks.

This doesn't mean Gunter or Jordan Obita won't get forward. If Reading have control of possession and the opposition penned back then they will support the attack. However, if they are doing their jobs properly then their should be little chance of the opposition being able to play the ball behind them.

When you see how badly McShane struggled for Wimbledon's second goal you can see why Stam is doing this. Reading's centre backs already struggle playing high so the last thing they need is to also be defending the flanks.

Does the bad outweigh the good?

For all my concerns about Reading's defending in pre-season it might be fair to recall that Steve Coppell once remarked that he felt that whilst strikers will always try to score goals, defenders will only really defend when it matters. It makes perfect sense given that attacking is often done on adrenaline whilst defending requires real effort.

The hope has got to be that come the real thing Reading's attacking midfielders will be a bit less gung ho and remember they have to do the dirty work too.

My worry is that by trying to play from the goalkeeper whilst also attempting to push the opposition back, there is a risk of huge distances developing between the defence and attack. Reading were at their best under Steve Clarke when they played a disciplined compact game.

It's admirable that Stam wants to be so positive but it puts a lot of pressure on the attack. If we can score goals than our worries in defence might not matter. However, an attacking approach will start looking naive if we struggle to score. How Stam deals with his first set backs will be interesting to watch.