The summer signing is already a key part of Jaap Stam’s side - we explain why.

Share All sharing options for: Why Dave Edwards Is So Vital To Reading FC And Jaap Stam

Dave Edwards didn’t exactly arrive with much of a fanfare in the summer. Announced not long before the game at Birmingham City, the transfer saw Reading pay Wolves roughly £1 million for the 31 year-old midfielder, who was on the search for more game time elsewhere after the Nuno Espirito Santo revolution at the Molineux.

The reaction from the fans at the time was hardly negative, but I think I speak for a lot of people when I say that Edwards’ arrival was a fairly low key one. After all, Reading already had a decent number of central midfielders, and were paying a modest amount of money for an experienced addition who would likely not go on to be an important first team regular.

The last few weeks have very much proven that to not be the case. Granted, Edwards isn’t the kind of player that grabs the headlines with a 30 yard screamer or a dazzling, mazy dribble past six players at once, but I’ve been impressed by the way that the Championship veteran has quietly had a profound impact on Reading’s midfield.

For me, good teams are built on underrated, under-appreciated players, and I feel that Edwards very much fits into that mould. Here’s why.

This isn’t a short read, so get comfortable.

Experience is always a good thing

Let’s kick off with the relatively obvious point - Dave Edwards brings a bucket load of experience in English football to Jaap Stam’s Reading. Across the Premier League, Championship and League One, he’s appeared in 307 games for Wolves and 102 for Shrewsbury Town, and another 43 at international level for Wales.

That’s important for this squad because there aren’t really many equivalents we can pick out. Chris Gunter (444), Garath McCleary (326), Paul McShane (356) and Yann Kermorgant (420) have comparable levels of experience, but none in the middle of the park. John Swift, Liam Kelly, George Evans, Joey van den Berg and Leandro Bacuna are all good players, but Edwards’ know-how trumps all of theirs.

He adds bite to the midfield

Considering that he doesn’t typically line up as a dedicated holding midfielder (that’s tended to be Joey’s role this season), Edwards still sticks his foot in enough to give the defence plenty of help. The former Luton Town man puts in the second highest average number of tackles (2.1) and interceptions (1.9) in the Reading squad - and yes, van den Berg comes out top for both (2.7, 2.6 respectively).

However, whereas his Dutch team mate is a notoriously aggressive tackler, Edwards seems to have a much more refined approach. The Welshman only makes an average of one foul per game - in contrast, van den Berg makes 2.2, and that’s also reflected in their disciplinary records - I’ll let you guess which one has five yellow cards this season and which one has only been booked once.

It’s also worth putting Edwards’ defensive contributions into perspective with what we saw last season. He is essentially a replacement for Danny Williams, in that they both play a box-to-box role in Reading’s midfield three, rather than being used as out-and-out defensive or offensive players. Interestingly, Edwards stacks up very well to the American statistically - across the entirety of 2016/17, Williams made fewer tackles (1.6) and interceptions (1.2) per game, but ended up with nine yellow cards and one red, which Edwards is unlikely to replicate.

All in all, Reading’s summer signing makes the midfield more well-rounded and effective through his intense, yet refined, work-rate. His tenacity not only helps Joey van den Berg in shielding the defence, it also gives attacking players like John Swift more license to get forward - hence the Englishman’s recent improvement.

An attacking weapon in his own right

Edwards is also a threat in the final third himself - his three league goals are beaten only by Modou Barrow - so he must be doing something right. What is it?

Looking through his trio of strikes so far (headers against Millwall and Barnsley and a close range finish with his right foot at Sunderland), it’s clear that Edwards is very intelligent when it comes to getting into the box and finding space for when the opportunity eventually comes his way.

On Saturday at the Stadium of Light, Edwards had already gone close in the first half by bursting to the near post, only to blaze his finish over the bar. Then, in the second half, he finally got his goal.

The image slider below shows the build-up; Barrow bursting down the left wing whilst Edwards matches his run through the middle. When the ball is squared to Kermorgant, the Welshman continues his run so that he’s the player Reading have in the box - not Kermorgant. 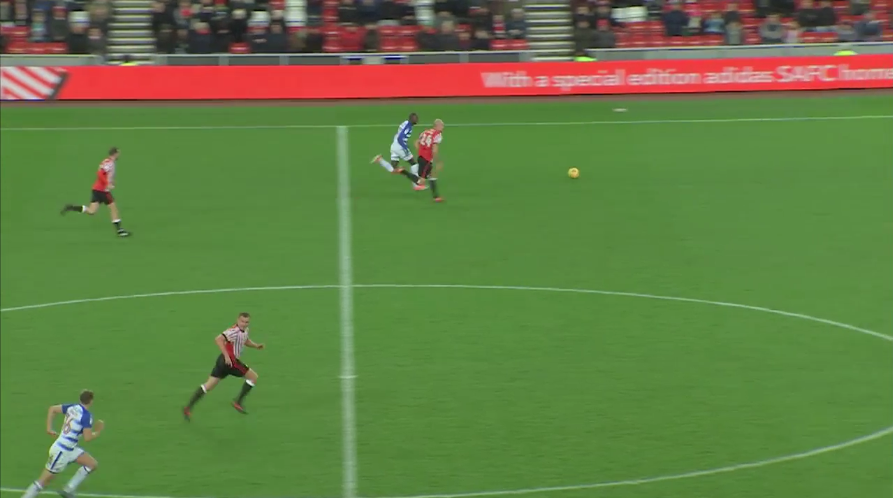 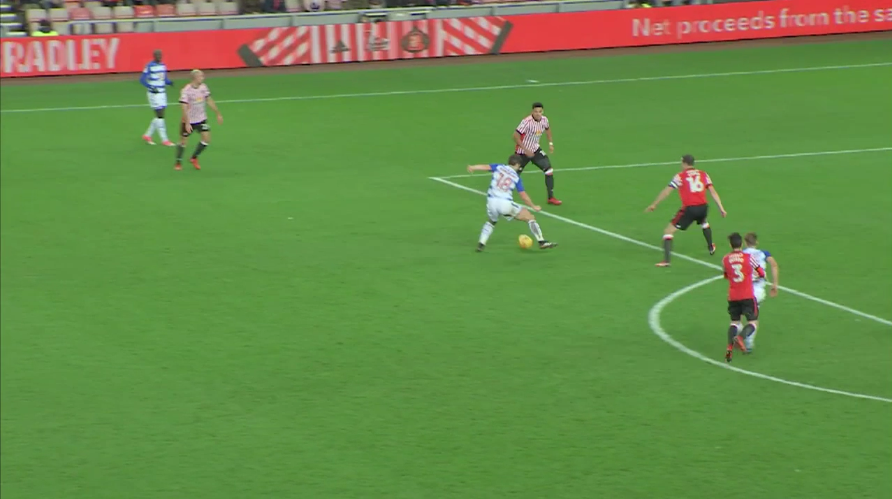 Eventually, as shown in the image below, Sone Aluko gets the ball and the chance to shoot, but note Edwards standing in the space in the middle. He’s charged from the midfield all the way up to the penalty box, and is ready to pounce on a loose ball - one that comes when Aluko’s blocked shot bounces towards him.

It’s fairly awful defending from O’Shea and the man behind Edwards who both give the Welshman the freedom of the city of Sunderland and a clear sight of goal, but for us? Happy days.

Granted, you could argue that Edwards always should be getting in that position to give Reading an option, but it’s clearly something that Jaap Stam has told him to do. After all, it’s Edwards - not Kelly (also in frame) - who made the run all the way from his own half to get beyond Kermorgant and into a dangerous position.

The nature of the goal may have been a bit lucky (some would criticise Aluko for not working the goalie), but having a player in the box to slam home any loose ball that comes his way means Reading are making that luck themselves.

He can do set pieces too, y’know

Edwards’ other two goals for Reading have been identical to each other - both inswinging corners to the near post which he heads home. It happened first at Millwall, before being replicated against Barnsley recently, and I’m delighted to see us scoring such simple yet well-drilled goals. Here’s the opener against the Tykes in gif form:

It bears all the hallmarks of a goal that’s been hammered into the team on the training ground; Kelly clips the ball into the space at the near post, whilst Edwards bursts away from two markers to find room to get his header away. Don’t take anything away from the finish - granted, it should have been a bread and butter save for the ‘keeper, but when you’re getting shots away from unlikely angles, you always stand a chance of scoring.

He’s a really tidy, effective player, and the £1 million we paid for him looks more and more like a bargain the more we see him play. He’s far from perfect, particularly in a Dutch-style ‘total football’ system - Bacuna is more versatile, van den Berg is stronger, Swift is more creative and Kelly is a better passer - but Edwards brings a composure and know-how that none of them possess (pun intended).

At 31, he’s not one for the long-term, but neither were Ian Harte, Mikele Leigertwood and Kaspars Gorkss, and they all proved to be vital players in a title-winning side. Could Edwards have a similar effect on this team?

Career stats quoted in the article come from Transfermarkt, whereas player stats come from WhoScored. The images are taken from Reading FC’s iFollow, and the gif was made from Reading FC’s official YouTube highlights of the Barnsley match, which you can check out right here.