A tactical look at Tuesday’s 1-0 defeat at Elland Road.

Share All sharing options for: Further Reading: How The Royals Frustrated Leeds United

It’s been a few days since the disappointment of a missed opportunity of a point against promotion-chasing Leeds United. The calls for Paul Clement’s head are slightly more subdued than before Tuesday night after a well-drilled away performance. I’ve placed the microscope on how Reading lined up at Elland Road and how Marcelo Bielsa’s half-time changes made all the difference.

The major talking point ahead of kick-off was the Reading team-sheet, with the Royals appearing to line up in a midfield diamond. This featured Liam Kelly at the base, flanked by the physical presences of Leandro Bacuna and Andy Rinomhota, with John Swift operating in the number ten role. In reality though, Reading set up in a 4-3-3 out of possession with Swift shifting over to the left; Yakou Meite central and Danny Loader on the right.

This was done to nullify the threat of Leeds’ full-backs, in particular Barry Douglas, who has averaged 1.9 key passes per 90 minutes. The result ultimately came down to a failure to suppress Douglas - the man who supplied the cross for Stuart Dallas’ decisive goal.

It was intriguing to see how Kelly operated as the middle man when out of possession. He would often start as the deepest lying midfielder, screening the defence. However, it appeared he was under instruction to press Leeds’ deepest lying midfielder when receiving the ball, with Bacuna and Rinhomota dropping into double pivot behind.

Therefore, this wouldn’t allow the home side easy ball progression from deep areas of the midfield, with the ball forced wide. This tactic worked well in the first half, limiting the number of touches the Leeds’ midfielders playing ahead of Forshaw had in central areas.

Reading looked to employ a similar tactic in the second half following its earlier success. However, the introduction of Samuel Saiz for Ezgjan Alioski at half-time altered the Leeds midfield, with Saiz looking to operate more centrally within the highlighted red area of the pitch.

A comparison between the touch maps of Alioski and Saiz shows the contrast not only in the areas of the pitch in which they operated, but also how they influenced the game, with Saiz (38) having over double the number of touches as Alioski (16). 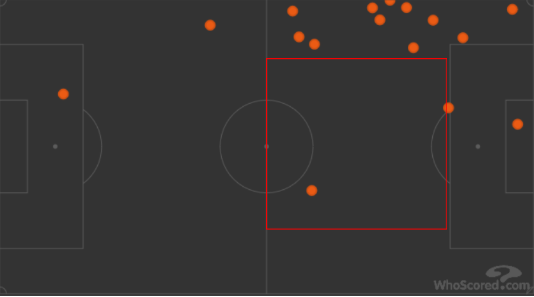 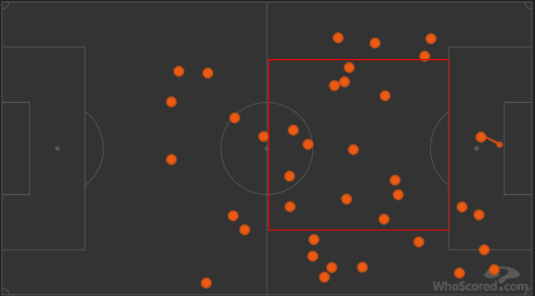 As a result of Saiz moving more centrally, one of Rinomhota or Bacuna were forced to pick him up, increasing the amount of distance required to cover in order to provide support to Reading’s full-back. This, coupled with a lack of protection from Reading’s wingers, resulted in Leeds getting more joy down the flanks which the likes of Douglas exploited. The Scot registered five ‘key passes’ (passes leading to chances), with a number of good opportunities coming via his crosses - including the goal.

With Paul Clement’s job under the microscope, this was always going to be a tough test away to a talented Leeds side with against arguably the Championship’s best manager. There were definite signs of improvement in how the Royals’ team was set up, with them looking far more compact in midfield than they have done previously. Fragility within this area of the pitch has been a contributing factor to the reason Reading have shipped 30 goals in 19 games this season.

The performance against Leeds seems to have found the most stable midfield options currently available. Clement looks to be tailoring the system to get the best out of those midfielders, using the physical capabilities of Bacuna and Rinomhota to cover the pitch horizontally, providing support to the full-back.

However, the most promising signs are that the work being done on the training ground is being implemented on the pitch. This can clearly be seen in pressing triggers (actions by the opposition which prompt Reading to start pressing) being worked on to nullify the threat of the opposition - for example Kelly pushing up the pitch at certain moments.

I do not think Clement can be blamed for the way in which the team was set up, having nullified the opposition in the first half. However, it could be argued that he did not respond quickly enough to the changes made by Leeds, and was ultimately out-thought by Bielsa.

He certainly won’t be the last.