Further Reading: A Tactical Look At What Went Wrong In 2017/18

Share All sharing options for: Further Reading: A Tactical Look At What Went Wrong In 2017/18

The season is over and we’re free to relax and enjoy Jon Dadi Bodvarsson’s charge towards becoming a world champion in Russia. @PannasNutmegs has taken a look at some of the systemic issues that plagued us throughout the season under both Jaap Stam and Paul Clement.

Lack of natural width on the right

One of the most glaring issues from the start of the season is how unbalanced this current Reading side is - unfortunately it is something that neither Stam nor Clement were able to alleviate. A front three of Garath McCleary, Roy Beerens and Yann Kermorgant was replaced with Sone Aluko, Modou Barrow and Jon Dadi Bodvarsson.

The most exciting signing of the three was Aluko, who had run the Reading defence ragged on our last few visits to Craven Cottage. However, things haven’t worked out with the balance of the side being totally thrown out by having to accommodate him.

To illustrate this, let’s look at two graphics: in orange, Reading vs Burton Albion (left to right), in blue, Barnsley vs Reading (right to left). 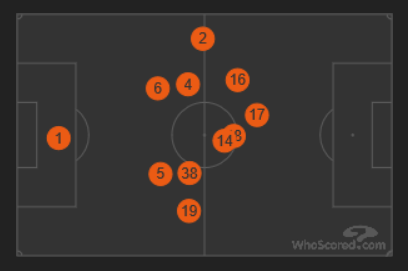 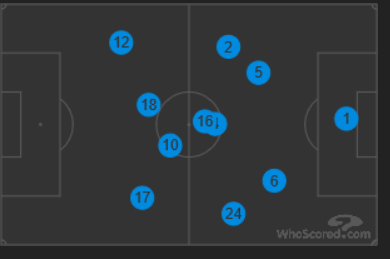 So often, Reading’s midfielders have been left with a lack of options on the right-hand side. As demonstrated in the first image, Aluko (14) has a strong tendency to come in off the wing to seek the ball to feet and try and make things happen - coupled with Leandro Bacuna’s (19) reluctance to overlap. Compare this to how, in the second graphic, McCleary (12) maintains the width, stretching the pitch horizontally for the midfield to operate in.

This lack of width has resulted in the pitch being condensed and play often being forced down the left. Aluko’s desire to get on the ball is admirable, but it does result in allowing the opposition defence to play narrower, as well as shutting off passing lanes to whomever is occupying the number 10 role. This can be seen by the player’s average positions, with Aluko (14) playing in a very central role and having a near identical average position to Kermorgant (18).

No threat in behind

The blame here cannot lie entirely at the door of the manager but with those responsible for the recruitment over the summer. Despite Kermorgant’s Indian summer last season, it was clear that a replacement was required. The Frenchman provides a natural target to play off and provides an out ball when Stam’s possession style came under pressure from an opposition press.

With teams implementing a more aggressive press than in the previous season, greater emphasis was placed on an out-ball and the need for a threat in-behind. A lack of a willing runner to stretch the defence has been to Reading’s detriment. Father time has caught up with Kermorgant, whilst Bodvarsson lacks the movement and raw pace to stretch teams in-behind in areas that will hurt the defence – far too often his runs are targeted out wide than within the width of the 18-yard box.

This lack of threat in-behind allowed opposition defences to step ten yards up as there was no danger of them being stretched, and helped them press Reading when we were in possession in our own third. It allows teams to stay compact in the middle third, playing to Arrigo Sacchi’s theory that there should be no more than 25m between the last defender and most advanced forward. This in turn had a detrimental effect on the space available between the lines of the opposition midfield and defence that the likes of Swift and Aluko looked to operate in.

To demonstrate this, take a look at the following two graphics. On the left, the opposition defence (white) lies deep, allowing Reading (red) space in which to work. On the right, by pushing higher up, the white team compresses the midfield. 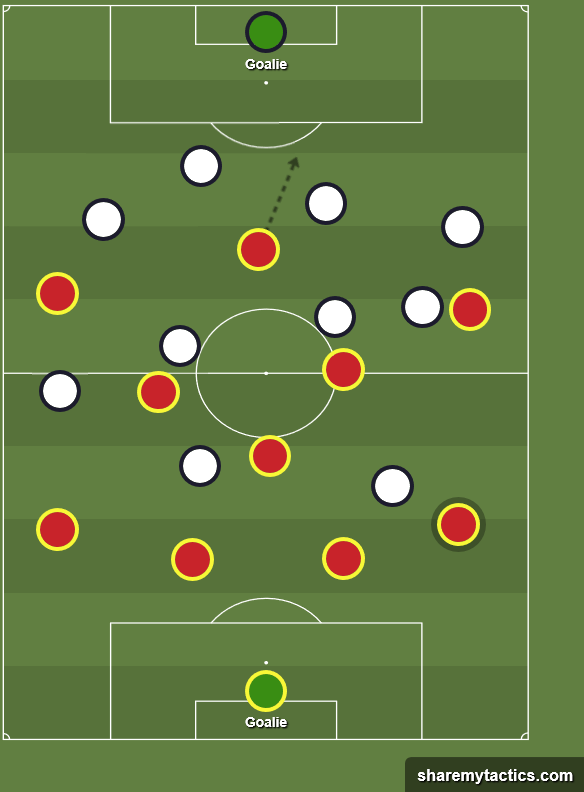 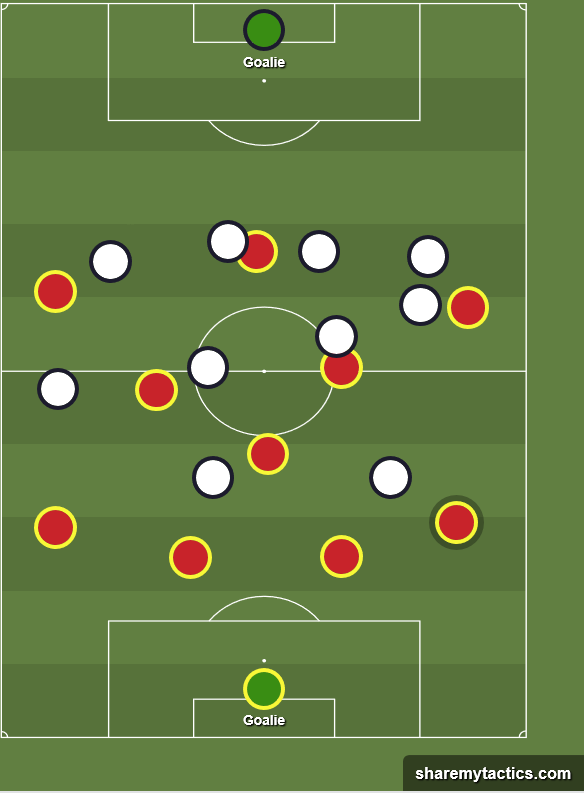 Lack of athleticism in midfield

I’ve lost count of the number of times that we’ve struggled in transition after losing possession. A lack of legs and physical presence in midfield has allowed teams to overpower and outrun us in the middle of the park. You could say that all the central midfielders to have made a significant contribution this season bar Bacuna are lacking in athleticism.

Despite the technical attributes the likes of Kelly and Swift possess, we are susceptible to the opposition being able to dictate games due to our inability to cover the ground, track runners (a combination of athleticism and discipline) and win second balls.

Progressing play out from the back

Arguably the key cog in any possession side is the pivot midfielder, they act as the link in progressing play forwards. This is highlighted perfectly by Sergio Busquets’ importance to Barcelona, and the position was under the spotlight at Reading during the entirety of Stam’s tenure.

One of Reading fans’ key criticisms of Stam’s system was the inability to excite the crowds at the Madejski with his methodical football, seen by the number of passes put together between the defence to find a tactical mistake from the opposition. However, these were not exploited as often as they should have been.

“I tried to trick the opposition into thinking I’d pass it wide again, and then – boom! – I’d split them with an inside pass to a striker.”

Under Stam, Reading lacked a more aggressive passer higher up the pitch to carry out the kind of move that Guardiola refers to, with the bill often staying out wide. The stats would suggest Liam Kelly is best suited to this role as his key passes (1.4 per game) over the course of the season rank higher than the likes of Joey van den Berg (0.5 per game), Dave Edwards (0.4 per game) and George Evans (0.2 per game).

Another contributing factor to the team’s struggles to play out came as teams had cottoned on to how to stop play progressing via the pivot. As early as September, Bristol City came to the Madejski and positioned a defender on the pivot to encourage the centre halves and full backs to progress play. This not only changed the angle of passes but limited the passing options to one half of the pitch allowing for the opposition to press more aggressively in a condensed area.

The diagram above shows the right back (blue with grey ring, bottom right of picture) in possession and how the opposition blocked off the deepest midfielder in front of Reading’s back four. This limited Reading to forcing the ball down the line, playing into a condensed midfield with pressure applied or returning play to the goalkeeper to switch the play.

Or, as Johan Cruyff stated:

“The problem begins by passing the ball to the full backs. You only have quarter of the pitch left. That’s all the full back has and once the opponent applies pressure, he has no option but to play it to the goalie.”

Anyone who has attended a match at the Madejski Stadium can testify to this - Reading constantly passing backwards - being a root cause of much of the discontent around the style of play.

Unfortunately, it has been a culmination of factors that have contributed to the downfall of last season’s progress, with no one issue being mutually exclusive. A lack of a width and an out-ball to spearhead the attack have contributed to the team’s struggles to play out from the back and played into the hands of allowing teams to press us.