A look at Reading’s tactical shortcomings against Bolton Wanderers.

Share All sharing options for: Further Reading: Sterile Royals Run Out Of Ideas

Saturday’s game at home to Bolton Wanderers may have been the best chance so far Reading have had to get a first league win of the season, but boy do we love missing an opportunity to get three points. After two matches in which we looked bright but were edged out by quality sides (2-1 to Derby, 1-0 to Nottingham Forest), the visit of Phil Parkinson’s dogged, determined Trotters team presented a very different challenge.

The task for Paul Clement was always going to be one of working out how to break down a well-organised, tightly-packed defence - something Reading have struggled to do at home under numerous managers in recent years. Ironically, the best case of us actually managing to do that came in January 2014 against Bolton of all teams, but I disgress.

To sum up how the game went tactically on Saturday: Bolton asked Reading that same question they’ve been asked so often: we’re going to sit back - can you break us down? In the first half the Royals had answers, but in the second they came up completely short.

How Reading set up

Despite the absence of Modou Barrow, Paul Clement lined his team up in the same 4-4-2 we’ve used throughout this season. John Swift replacing the pacey Gambian down the left, with Sam Baldock partnering Marc McNulty up top and Paul McShane preferred to Tiago Ilori (me neither).

However, in practice we attacked in a formation more akin to a 3-4-2-1. With no orthodox left-winger, Swift cut inside to link up with his fellow midfielders whilst Blackett pushed on down that flank. Whilst Baldock led the line, McNulty dropped off to find space in-between the lines and link the play between the middle and final thirds.

A promising but flawed first half

In the first half, that system seemed to work well to a large degree in how it helped Reading to attack through the middle. Rather than relying on getting the ball wide and swinging crosses in, which a physical side like Bolton will be happy to defend against, the home team both used the ball well to create space and had the players to exploit it.

Chief among them were McNulty and Swift, both of whom had license to roam away from their starting positions so that they’d be harder to pick up. Before the break they registered 28 and 39 touches respectively, the highest totals of Reading’s attacking players and more than almost everyone in a Bolton shirt.

Where Reading really fell down however was in the lack of wide options to stretch the play and create even more space centrally that the strikers could exploit. With Swift and Meite both inclined to cut inside onto their stronger feet, it put a lot of pressure onto the team’s full-backs to overlap - that wasn’t so much of a problem with the offensively-minded Yiadom on the right, but it was with Blackett.

To be fair to him, the former Manchester United man isn’t suited to getting forward even when he does have a winger in front of him, but the lack of Barrow down the left made things even worse. Struggling to beat Bolton right back Pawel Olkowski one-on-one with his lack of pace and acceleration, Blackett attempted no dribbles or crosses in the first half

The end result was that the Royals couldn’t put enough pressure on Bolton’s back four in wide areas. Here are all the touches made by Reading’s attacking players and full backs in the first half - note how centrally clustered they are, with a particularly noticeable gap in the top right corner.

A dire second half

Although Reading had had difficulty unlocking the Bolton defence in the first half, they’d still managed a respectable nine shots on goal, three of which were on target, going particularly close through Swift, Meite and Baldock. However, despite the gravity of the situation that Yanic Wildschut’s 48th-minute winner created, we still managed to get worse.

Six second half shots, none of them on target.

Our start to the game had felt like a breath of fresh air, but the way we responded to the goal was everything you would have expected to see last season. In total, 310 passes to Bolton’s 118, but only six leading directly to goalscoring chances. As was the case so often under Jaap Stam, we saw plenty of the ball but lacked the initiative and cutting edge to do anything with it.

Bolton Player Ratings: Praise For The Attack, Less So For The Central Midfield

At times like that, a team needs someone to step up, get involved in the game and drive the team forwards - in our side the most obvious fit for that role is probably midfield architect Liam Kelly. Statistically, he was the ‘most involved player’ on Saturday, making 111 of Reading’s 612 passes and 121 of the team’s 804 touches, but in truth he was a passenger rather than one trying to make things happen. Of his 59 passes after the goal, just one created a chance.

It didn’t help that Reading’s front players were finding it increasingly tough to find room against a Bolton side that cut down on space to protect their lead. While McNulty had touched the ball 28 times before the break, he managed it a mere nine times after Wildschut’s strike, and only once in the box.

To give credit where it’s due, Tyler Blackett upped his game offensively as the game went on. Although he’d struggled in the first half, he got into better positions in the second and managed to put in two crosses. 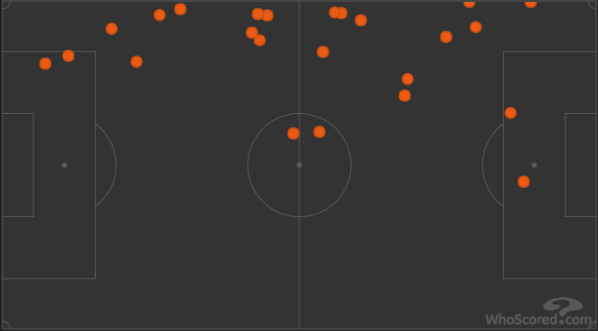 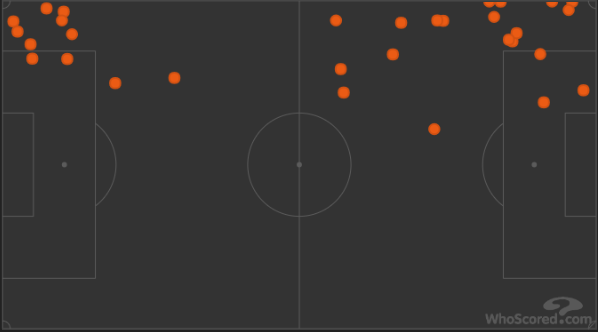 Where do we go from here?

In the absence of so many wide players, Paul Clement probably did the best that he could realistically do in terms of setting up Reading’s attacking players at the start of the game. The new system looked fresh before the break and brought attacking ideas that we haven’t seen in quite a while, with the partnership of Baldock and McNulty looking particularly promising.

However, the weakness of this team’s mentality and their inability to react to the goal will take a lot of work to address. Much of the problem - a low tempo, players hiding on and off the ball rather than trying to impact the game - is a continuation of last season, especially with no new creative spark brought in to spruce up the attack. That said, improvements can come - the attack is still gelling and should continue to do so, whilst returning injured players (and the reported imminent arrival of Nathan Dyer on loan) will give this side a boost in options and quality.

What Clement does not have to focus on is making individual players more proactive in tough situations - like when we go a goal down. Liam Kelly for one has the ability to influence a game from his deep midfield role, but needs to be purposeful, take more risks and create opportunities for his teammates to get into the game. Up the tempo Liam.

At the end of the day, it’s only by being bold and taking the initiative that Reading can get out of this rut.