Further Reading: In Search Of The Enigmatic Sone Aluko

What’s going wrong for Aluko, and how do Reading change it?

Share All sharing options for: Further Reading: In Search Of The Enigmatic Sone Aluko

Statistical analysis in football can be tricky and misleading. Although there’s plenty you can draw from a close look at a player’s pass accuracy, total shots, dribble completion rate and more, it can’t tell you the key information. Did X actually play well? On the whole, did they make a key contribution to the team? Those are things which can only be judged by those that watch the game, but even then they’re open for debate.

That conflict into how one should analyse a player sets up the enigmatic Sone Aluko rather neatly. Statistically speaking, he ticks some nice boxes, but that’s far from the whole picture. Take Friday night’s performance for example, when the former Fulham man made more successful dribbles (4) than anyone else on the pitch, had more touches of the ball than any other Reading attacking player (41) and even came in joint second for attempted tackles across both teams (4).

Although I am course ignoring some of the more important areas for offensive players - Tiago Ilori (2) had more shots than Aluko (1) - the above numbers still suggest the winger had a decent game. Watching the game in real time on Saturday I would have agreed with that - Aluko looked noticeably sharper than he has done, even if last season set a particularly low bar.

The issue though is in how those stats play out in practice. We’ll ignore the tackling stat as it’s a tad unfair to judge him on that part of his game, so we’ll instead focus on dribbles and touches - two useful indicators for a creative player’s influence on a match. Here’s how Aluko’s presence actually played out on the day.

Reading are going from left to right. 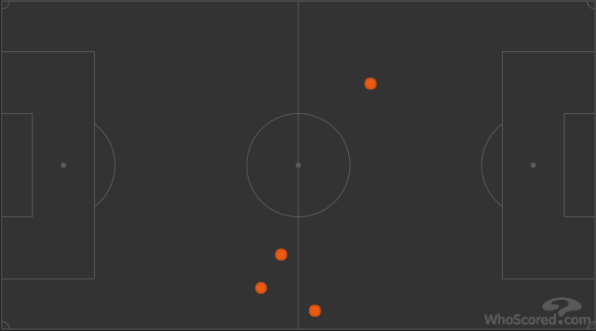 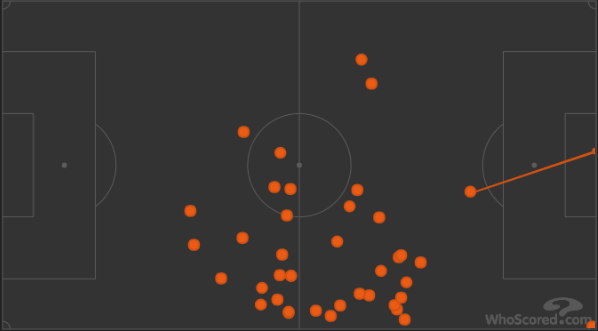 Aluko’s presence in the final third was minimal. He didn’t attempt a dribble anywhere near the Derby County penalty area, and only got on the ball in open play in a dangerous area once - a wild shot in the first half denoted by the straight line. Otherwise, two dots on top of each other in the bottom right of the second graphic show the two corners he took (to be fair, one of those set up a good chance for Ilori).

For a deeper lying playmaker those stats might be fine, but for an attacker that Reading really need as an option around the penalty box, it’s not good enough. In fact, if you’re looking for players with a presence in the final third, you get more from right back Andy Yiadom and left back Omar Richards.

Side note: that shot came from Yiadom and was the only one taken by a Reading player after we took the lead.

What’s going on, and how do we change it?

Why his stats are like this is an interesting question. We could conclude that he’s just not playing very well and should therefore play better, but it’s more than that - Sone Aluko suffers from not having an obvious role in Paul Clement’s Reading.

Aluko isn’t a traditional winger like Garath McCleary or Jimmy Kebe in that he wants to hug the touchline and use his pace to stretch the play. That would be ideal for Reading’s 4-4-1-1 and work well in tandem with Modou Barrow who very much does fit that description.

Aluko on the other hand prefers to cut inside, possibly from a desire to get involved in the build-up play in the midfield. That might give Reading a useful extra passing option in the middle. but it’s detrimental to the overall shape of the side. Besides dropping Aluko (which I’m sure would go down well among a lot of you), there are two things that Clement needs to make happen if the Nigerian is to have a bigger impact in the team.

Firstly, and quite obviously, Aluko needs to push up. It’s probably a lack of confidence that’s holding him back from getting forward and taking risks, but that’s what he needs to do.

Secondly, Yiadom needs to push up too. Aluko’s style of cutting inside can be useful for Reading, but he’ll need an overlapping runner when he does to stretch the pitch and give the team an option. Last season that didn’t really work with Gunter not the most attack-minded of right backs, but the new arrival does seem happier to bomb forward - hence his touches and wayward shot against Derby.

This might all become null and void if McCleary, Callum Harriott or Adrian Popa return from injury and eventually pinch Aluko’s place, but Paul Clement would still do well to make Aluko fit into this team better. If he can, Reading do still have a good player on their hands.

Agree or disagree with the above? Let us know in the comments below or on social media.