An in-depth look at what we learned from a thoroughly enjoyable day at the Mad Stad.

What a win that was! For the first time in what feels like forever, Reading achieved a textbook comfortable home victory in the league: bright attacking play, clever game management and even a clean sheet - our first in the league this season. Although visitors Hull City were very poor on the day (sorry guys), the Royals still had to put the performance in to get the points.

How Paul Clement set his team up

So far this season, with the exception of a ‘three at the back’ experiment in the Watford game, Reading have been deployed in some kind of 4-4-2 - sometimes tweaked to more of a 4-4-1-1. However, Clement altered that even further on Saturday, returning to the 4-1-4-1 he used in his first game, the 1-0 home win over Queens Park Rangers.

Although a few players were put in out of position, it was the arrival of Saeid Ezatolahi that allowed the team to be set up differently. In the Iranian international, Reading finally have a specialist at anchoring the midfield - it’s a role that Clement has tried various players in so far (van den Berg, Bacuna, Meyler, Edwards), but none have properly made it their own. Besides generally giving Reading more balance to the midfield, ability on the ball and protection to the defence, Ezatolahi’s presence paid off for Leandro Bacuna and Liam Kelly who looked more comfortable freed of their defensive duties.

However, the big area of improvement we’ll be hoping to see in terms of the team-sheet is out wide, where Tiago Ilori (CB to RB), Andy Yiadom (RB to LB) and Sam Baldock (ST to LW) were all shunted around. Although all of them put in promising performances, these areas may be exposed more against better sides - Brentford being up next. That said, the side should become more balanced with Tyler Blackett or Jordan Obita in at left-back and potentially with Barrow on the wing.

The one player who really did well out of Saturday’s game was Jon Dadi Bodvarsson. Although the plaudits will rightly go to Ilori, Yiadom and others, the Icelander played a crucial lone striker role for the team, giving Reading the effective focal point we’ve lacked far too often this season. His number of aerial duels (nine, more than anyone else in the team) show how he provided an outlet to his teammates.

What makes Dadi so effective is that he’s not your bog-standard target man, the archetypal ‘big man up top’. Instead, his mobility and willingness to get about the pitch gives the opposition more to think about. Against Hull, that movement was targeted against the Tigers’ left flank, with Bodvarsson coming over to that side to help out winger Josh Sims. In total, 44% of Reading’s attacks overall went down our right.

In the graphic below, Reading are shooting from left to right. 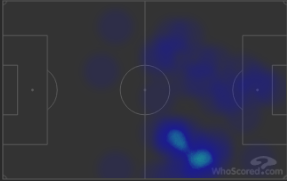 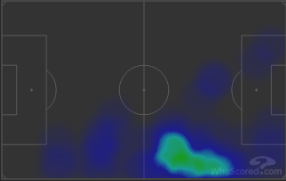 Notice also how Bodvarsson’s aerial duels (shown below) are focussed down that same side. - when Reading went long to their lone frontman it was done so Sims, rather than Baldock on the opposite wing, would be in close support. That made sense as Sims, the better dribbler of the two, could run forwards with the ball after receiving the ball from Bodvarsson. Baldock on the other hand, a converted striker, wouldn’t have been as effective in that role.

The most impressive aspect of Dadi’s performance was, of course, that he just keeps scoring. His 70th-minute strike means his tally now stands at five for the season, joint-third in the Championship behind Neal Maupay of Brentford (eight) and Jay Rodriguez (six) of West Bromwich Albion. However, what sets him apart from almost all the competition is his strike-rate. His five goals have come in just 479 minutes of Championship football, meaning he finds the net every 96 minutes. Only Maupay (72) betters that.

Considering how Reading have struggled for goals both this season and last, they could have stumbled upon an unlikely free-scoring striker, rather than news arrivals Sam Baldock or Marc McNulty. Dadi has already beaten his 2016/17 total for Wolves, and is halfway to last season’s tally, but it’s still only September!

In a time when fans are becoming increasingly disillusioned with the team due to a perceived lack of effort, John O’Shea is a ray of light. The 37 year-old’s arrival in the summer was met with a mixed reception from the supporters to say the least, but he’s shown in his two starts and a sub appearance why Paul Clement wanted him in the squad.

Simply put, O’Shea is an absolute warrior. During the second half, the Irishman went in for a crunching slide tackle on the touchline - yellow card - but started bleeding from a deep cut to the inside of his mouth so needed a change of shirt. A few minutes later he was back on, sporting a somewhat makeshift mouth-guard.

John O'Shea spent his last twenty minutes of #REAvHUL running about with a big lump of tissue paper in his mouth after getting a kick to the teeth. It didn't stop him yelling though - great organising and coaching throughout the match. pic.twitter.com/kbsfgmUMvb

At 37 O’Shea isn’t going to get any quicker, but he made up for that lack of pace with a rock-solid display at the back, keeping the defence organised and heading the ball more times than anyone else in his team (12). Nigel Gibbs summed it up perfectly post-match by saying O’Shea “epitomised” the manager’s desire for his team to be “fighting for everything”.

Even when exposed for speed by Chris Martin late on (you know you’re slow when Chris Martin is outrunning you), he took the red card rather than allow the former Reading striker to net against his old club. Cue a heartfelt ovation from the home fans as he walked off the pitch.

John O'Shea jogging off like a hero to huge applause after getting sent off. I love the man.

The tactical stats and graphics come from WhoScored, whereas the goal numbers are from the BBC.