Heading into Saturday’s fixture at Griffin Park while fans congregated at The Griffin pub as part of their pre-match rituals, there was chatter of “would you take a point?” “Yes” seemed to be the resounding response. However, after the game there was a feeling of slight disappointment to have conceded late on to 10 men and only come away with a point after such a good performance.

Despite four changes from the side that faced Hull, the Royals lined up in a 4-3-3 shape once again. It was interesting to see that this 4-3-3 in possession regularly became a 4-4-2 when Reading were pressing Brentford in the home side’s final third to stop them playing out via the centre halves.

Those defenders’ quality on the ball can be seen by Chris Mepham registering two key passes and Ezri Ngoyo’s pass completion rate of 98% (WhoScored). However, once Brentford progressed into the middle third and secured good possession, John Swift retreated into the left-hand side of a midfield three with Ezatolahi screening the back four. 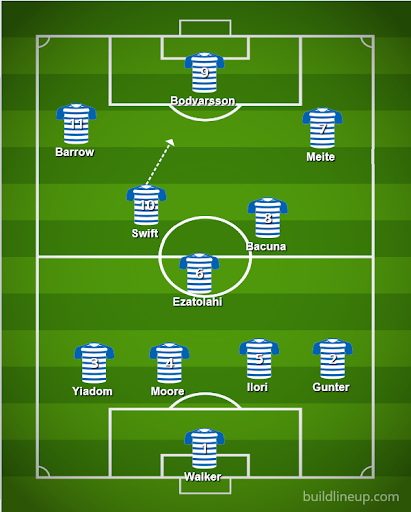 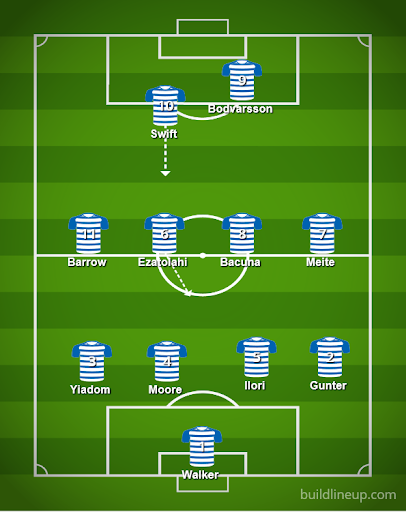 Reading in (left) and out (right) of possession

One notable exclusion from the team was Josh Sims, who could have felt unlucky to have been left on the bench following his display against Hull City. However, his replacement, Yakou Meite, was a vital part of Clement’s tactical approach due to his role as a wide target man. Many of Sam Walker’s passes were aimed in his direction as he came in off the by-line to compete with Yoann Barbet, to mixed success.

It should be noted that Barbet is definitely on the larger side of full backs in the Championship at 6”2’, as displayed when he nodded home the late equaliser from a corner. However, this is a tactic Clement may look to employ in away games over the coming weeks in order to relieve pressure from the opposition press.

It was no surprise that throughout the game Brentford looked to dominate possession, having 69% (WhoScored), and looking to create overloads in the wide areas of the pitch as many of Brentford’s chances came from set-back crosses on the right-hand side.

Praise should be given to Leandro Bacuna and arguably the stand-out player from a Royals’ perspective - Saeid Ezatolahi - for their defensive screening of the back four. They protected the passing lanes, forcing Brentford to work the ball wide rather than straight up the pitch. The impact Ezatolahi had can be seen as he completed nine of 16 interceptions made by the Royals, restricting passes into Brentford’s forward players.

Coming into the game, this was a showdown between two of the Championship’s top scorers: Neal Maupay and Jon Dadi Bodvarsson. Both continued their rich vein of scoring form by getting on the scoresheet, bringing their totals to nine and six respectively.

Although Maupay opened the scoring, capitalising upon some slack marking in the box, from a Reading perspective there is reason for encouragement with how quiet he was kept overall on the day. Bodvarsson took his tally for the season to six, one shy of last season as he profited from a David Bentley mistake, showing a poacher’s instinct to follow the shot in.

Goalkeeping errors were a theme that proved pivotal in both of Reading’s goals, with the second coming as Bentley allowed Swift’s free-kick to slip through his grasp. It was evident that Swift was up for Saturday’s game as he faced his former employers showing some very neat touches and displaying that he is still Reading’s classiest operator. It is a case of trying to keep him fit that is the major issue.

As a side note, there has often been a criticism that Reading are too soft and have rolled over on too many occasions. This may not please those who champion fair play, but it was refreshing to see Reading get under the skin of an opposition side, in particular Barrow rolling his studs on the ball whilst Brentford set up a free-kick.

For once a little sh**housery and nastiness were welcomed even if it did come in the most unlikely form of the Gambian winger. It was particularly noticeable how Brentford skipper Ngoyo gesticulated by pointing at his head, urging his teammates to keep their concentration, showing how Reading had upset their rhythm. Many may disagree with the sentiment of this point given Reading’s recent disciplinary record, but very few have come as a result of unsportsmanlike conduct, rather mistimed tackles and lack of discipline.

Overall, a point away to a team that look like they will be pushing for the play-offs come the end of the season is a good day at the office. It was an impressive performance slightly tarnished by conceding the late goal from a set piece. However, it could have been a very different story had Bentley not produced two blunders on the afternoon. Hopefully Reading can take the positive momentum of this and the Hull City result into Tuesday’s fixture against Queens Park Rangers.

What did you think of the game? Let us know in the comments below.