Reading finally got their man in the January window: Nelson Oliveira. Having been linked with the Portuguese striker as far back as Jaap Stam’s tenure, it’s a move that’s certainly been a long time coming. With his arrival in Berkshire and debut goal versus Bolton Wanderers this week, I’ve taken a look at the numbers to work out what we can expect to see from his play.

A look at some historic data of goal and shot locations from Oliveira’s past league campaigns (where he’s appeared for over 1000 minutes) gives us an insight into his style of play. As a Reading fan it is slightly alarming that Oliveira has only reached double figures in a league campaign once (in 2016/17), given the recent failure of more prolific strikers at the Mad Stad in the shape of Matej Vydra and Lewis Grabban. 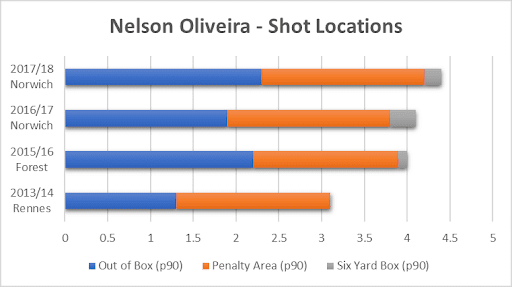 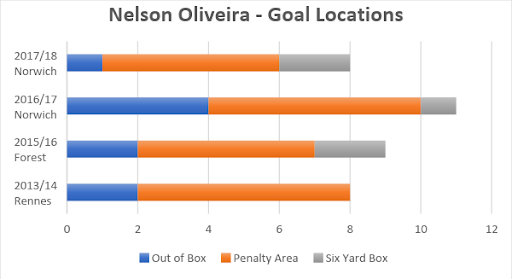 On the face of it, Oliveira is a trigger-happy striker and is not afraid to pull the trigger, averaging four or more shots per 90. This should be judged in context of this season’s top scorer, Tammy Abraham, who averages 3.5 shots per 90.

The eye naturally gets drawn to Oliveira’s 2016/17 season when he struck 11 goals in total, four of which came from outside the box. Interestingly this is his only season in England where his shots outside the box per 90 has dipped below 50%, albeit not by much. This shows his confidence and inefficiency in equal measure, having only found the net once from outside the box from 62 shots in 17/18.

Oliveira’s volume of shots per 90 in the 18-yard box has stayed consistent in all four seasons profiled, with the majority of his goals coming in this area. However, more intriguingly, for a striker so trigger-happy Oliveira takes a surprisingly low volume of shots from within the six-yard box.

This is an area of concern as I feel it has been a specific shortcoming for Reading of late, as forward players runs have not been aggressive enough in attacking this area. In the seasons profiled, Oliveira has only averaged a shot from inside the six-yard box every 766 minutes or eight and a half games.

Consider this in the context of Billy Sharp, the archetypal poacher, who averages 0.7 shots per 90 from inside the six-yard box, and has already scored 10 goals from this area of the pitch already this season. Oliveira’s shot and goal locations differ vastly from that of Sharp’s poaching nature, and are more akin to Harry Wilson’s shot locations - despite the Derby County man not being a classic number nine.

With Reading looking like they may not have signed a striker with a profile of scoring tap-ins, all Royals fans will be hoping that enough of Oliveira’s many strikes from outside the box nestle in the top corner and steer us to safety.