Omar Richards and Andy Yiadom could be key offensive weapons in the Royals’ new system.

As I mentioned in my piece on Ovie Ejaria, there’s a heck of a lot to unpack from Sunday’s 3-0 win over Cardiff City. Having looked at the midfielder’s stand-out display, I wanted to then look at the formation in general. After all, it was the first time that Jose Gomes had gone 3-5-2 at home, and it looks like a set-up that’s here to stay.

However, besides the obvious points of this is how Reading lined up in the 3-5-2, it’s good isn’t it, there wasn’t a lot more to be said on the team selection and formation. There was something else that jumped out at me though, particularly when watching the highlights - an aspect of Reading’s set-up that deserves a bit of a closer look.

For those of you that have read the headline (most, I’m guessing), it’ll come as no surprise that this piece is about wing-backs.

Post-match discussion on Twitter has seemingly been focussed on pretty much everyone else in the team, or at least every other position. George Puscas, Ovie Ejaria and John Swift were the most obvious stand-outs, the back three’s resolute defence didn’t go unnoticed, and neither did a confident display from new ‘keeper Rafael Cabral.

But the impact - or in some cases lack of it - from Andy Yiadom and Omar Richards hasn’t been chewed over quite so much. That’s of course understandable given that neither had particularly eye-catching performances for good or bad reasons, and others in the team grabbing the headlines.

However, in a 3-5-2, the wing-backs’ role is arguably the most crucial of any position. Looking after an entire flank on your own is no mean feat, but doing it well can give the entire team an extra dimension offensively. Fortunately for us, the Cardiff City game taught us a lot about how Jose Gomes wants to use his wing-backs, and how well they fit the bill.

This is something I noted in a tactical look at the Peterborough United friendly, so it’s certainly nothing new. Reading’s width this season will come from its full-backs - or wing-backs, rather, given the shift away from the 4-4-2 diamond towards the 3-5-2 - meaning that Andy Yiadom, Omar Richards and co will be asked to push up really high when the Royals are attacking.

That was certainly the case against Cardiff City, when Yiadom and Richards were given free reign to charge forward all the way into the Bluebirds’ penalty box. Here’s their combined heat map from Sunday, with Reading shooting from left to right (Richards top, Yiadom bottom).

Although it was Richards that was best at getting up the pitch and into dangerous positions, Yiadom did a fine job himself, and even managed to win a penalty late on with a lung-bursting run into the box before being tripped by Sean Morrison. For me though, their desire to get forwards was demonstrated particularly nicely in the build-up and background to Reading’s second goal.

First up, the starting positions. Reading have possession at the back, with Pele playing a short pass across to Matt Miazga. Liam Moore is at the top of the image, just above Ovie Ejaria, while five players are pushing into the final third: George Puscas and Lucas Joao occupy a centre back each, Omar Richards the right-back, Andy Yiadom the left-back, with John Swift drifting over to the right.

The key thing here is just how ruddy high Reading’s wing-backs are. Jose Gomes has instructed them - with the two centre-forwards - to go man-for-man with Cardiff’s back four. Because of that high positioning, when the ball is fired into Yiadom’s feet, the Ghanaian can take his marker out of the game - enough for the (for some reason untracked) Swift to get in behind.

Besides his fine cross and Puscas’ sharp finish, note how Yiadom and Richards are in the box when the delivery comes over. If the goalie spills the ball centrally or pushes it out wide, there’s a wing-back on hand to convert the rebound. Luckily, we didn’t need one.

The wing-backs need to contribute more, though

Although both Yiadom and Richards have played as wing-backs before this season, this system is still fairly new to both, so the following thoughts aren’t meant as criticism of either. They’re also part of a team with lots of recently acquired personnel that’s being asked to use a new system, so there’s plenty of improvement to come across the board.

What both of them need to work on going forwards is their impact in the final third. That may sound an odd observation given that Yiadom got two assists (one for Puscas’ opener and the other for Swift’s goal - but in truth the scorer did all the work in both cases) and won a spot-kick, but the stats show that he and Richards must do more in front of goal all round.

Despite getting so high up the pitch, neither wing-back took a shot on goal, for me showing that the system needs sharpening up so that Reading can create opportunities for the wing-backs to get shots away. The duo also created just two key passes (ones that led directly to chances for a teammate). Interestingly though, both key passes were made by Yiadom near his own penalty area, and both led to goals; the Ghanaian played in both Puscas and Swift before their charges up the pitch to open and seal the scoring respectively.

That shouldn’t distract from the more important point though: that, if Reading’s new-look 3-5-2 is to be successful going forwards, the team needs more attacking impact from the wing-backs in the final third. For me, a good way of them improving that would be to attack the corners more, where they’re in a position (literally) to stretch the play that bit more, get in behind the opposition backline and put in crosses.

The image slider below shows two things about Reading’s wing-backs in the Cardiff game: the touches they made and the crosses they put in. As you can see, Richards (at the top) was noticeably better at pushing into the space level with the penalty box and putting in crosses - Yiadom only managed one. He could probably learn a bit from his teammate here. 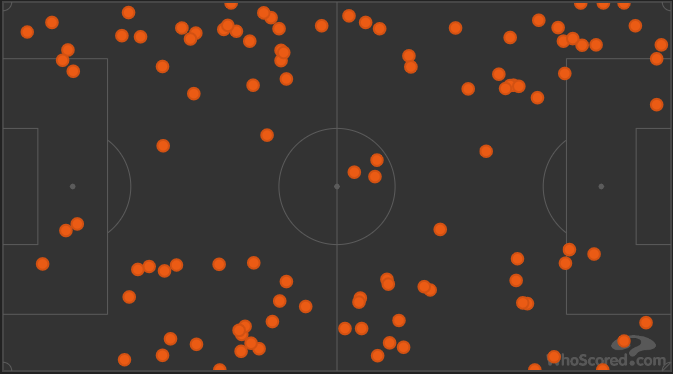 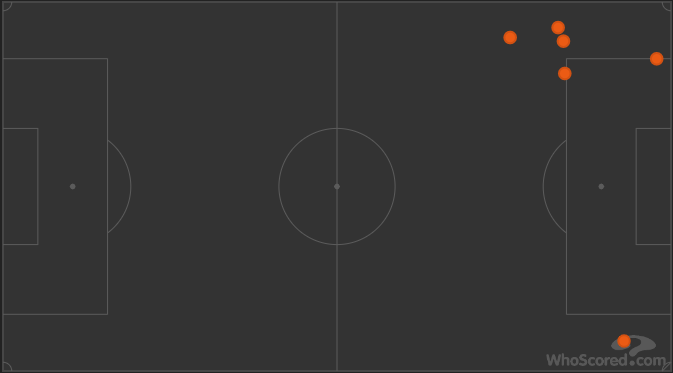 Looking to the future

There’s little suggestion that the 3-5-2 is going anywhere, bar a particularly bad run of form or injuries/suspensions that make the formation unworkable. It’s similarly safe to assume that Andy Yiadom and Omar Richards have their first-team positions locked down, with no other players in the squad currently in a position to challenge them.

That will eventually change though, with Jordan Obita and Tyler Blackett due to return from injury in the not-so-distant future. However, I’d only put the former down as a potential wing-back - he’s got the energy, all-round skillset and confidence to take a man on that makes him suitable for the role, while Blackett is much more comfortable as a traditional full-back. Nonetheless, having two players coming in to challenge Richards for that spot can only be a good thing for competition and squad depth.

On the other side, Teddy Howe seems to have slipped out of contention, having not been involved in the Wycombe Wanderers match or either of Reading’s last two under-23 games. Interestingly, it was Andy Rinomhota who was given the chance to impress as a wing-back at Adams Park last week. Could he return to the role in the future? Although he’s got the versatility to do so - and made his first-team debut as a right wing-back all the way back in 2017 - for me he lacks the attacking threat that Yiadom possesses.

All those considerations are for the future though; Yiadom and Richards have free reign at least in the short term to make those wing-back spots their own. Whether or not they do so could be key in the success of Reading’s 3-5-2.