So Reading may have gone out of the Capital One Cup against Everton but who stood out in the 2-1 defeat at the Madejski Stadium?

As I said in my report, it's sad to see a player who by all accounts is a lovely bloke and a previously great goalkeeper fall on hard times, but Al-Habsi once again showed why he's now merely a number two at Championship level. His distribution was fine but once again when he's called upon to make a fairly routine save he's blown it and cost us a game. Errors against Crawley in pre-season and even Portsmouth in the last round are one thing but you just can't get away with them against a team such as Everton. Did make a decent save one-on-one from Lukaku but by then the damage was done.

Effective performance by the Wigan loanee who had a difficult task trying to keep Gerard Deulofeu quiet. While the former Barca man did get to the byline a number of times, Taylor also made some big interceptions, blocks and clearances under significant pressure and Jordan Obita will have to stay sharp if he's to keep his regular place at left-back.

His move to Chelsea didn't stop Clarke giving him the armband tonight and if Chelsea fans were watching they would have been impressed by the way Big Hec dealt with an experienced and quality Premier League attacking lineup. Confident on the ball and determined to lead by example, you couldn't ask for too much more from Hector, although his foul did lead to the second goal. Like Jordan Obita, both Paul McShane and Anton Ferdinand have some serious competition.

Had a few wobbles early on and his passing was a tad wayward but overall a very good performance from someone making a first start at senior level in five months. To keep Romelu Lukaku quiet is no small feat and while it wasn't always elegant, he got the job done.

Standard game for Gunter who did look a bit tired towards the end. This was already Gunter's 13th game of the season for club and country and you hope he's not going to run out of steam when the real slog gets going in the spring. On this occasion he did his best but this wasn't an overly noteworthy night for the Wales international.

When he signed his new deal a couple of weeks back I speculated that maybe Tish would now head out on loan but it's becoming more and more apparent that this kid is ready now. Yes he's still got some wrinkles in his game but at just 20 years of age he was easily mixing it with some top quality Everton midfielders and he's going to be one hell of a footballer in the years to come.

Easy to see why he was once on Real Madrid's books as he's got a great eye for a pass and seems very comfortable on the ball. However, with his back to goal he sometimes looked a bit too casual in possession and sometimes struggled with the pace of the play. A decent first impression but Oliver Norwood shouldn't feel too threatened just yet. 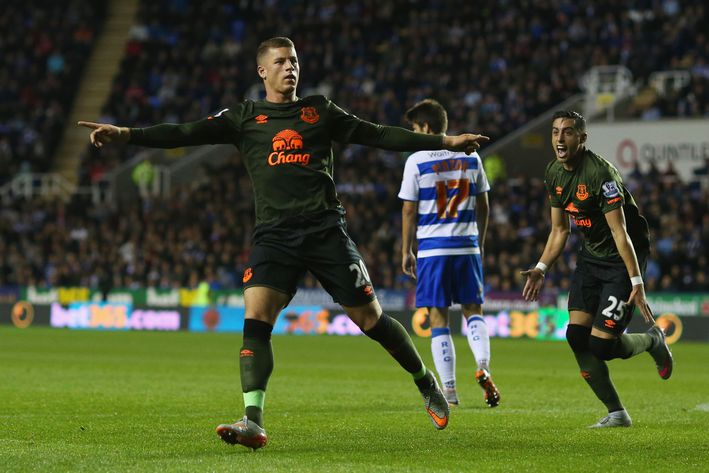 A much changed Reading side pushed Premier League Everton hard but a moment of quality plus some sloppy goalkeeping cost Steve Clarke's side a place in round four. Read the full match report here.

Ola! John... A solid welcome to the Madejski for the winger who provided an excellent cross to Nick Blackman for Reading's goal. John nearly went one better with a goal of his own but his fizzing effort just crept wide with Robles rooted in the Everton goal. That being said he did seem to give the ball away a fair bit and understandably looked a bit tired as the game went on.

The Brazilian also showed moments of real quality, with one cheeky back heel the highlight for me as he freed Paolo Hurtado only to see the Peruvian play a shocking pass seconds later. Sometimes looked a bit lightweight but looks to be a bit of a handful and should improve with more minutes.

He's got some speed, that much is clear, but beyond that I'm not sure right now! He was well marshalled by Everton and kept fairly quiet but for a first impression this wasn't bad from Hurtado. Sadly he seemed to tire pretty quickly in the second half and was lucky to not get sent off after committing another needless foul minutes after picking up a booking. Clarke wisely subbed the South American minutes later.

Wow I'm sure glad we picked up this new Nick Blackman fella to replace the old one. This new Blackman knows how to find the net and even in an unfamiliar position as a lone striker. To score one and come within a fine save of a second while up against two England centre backs is a mark of a man in form and I'm delighted the forward is finally living up to his long touted potential. The usual reservations about wanting to see it continued through the winter remain but for now he's absolutely bang in form and one of the best, if not THE best player in the team.

Was given 25 minutes but couldn't create much to trouble the Everton defence.

Pretty subdued performance from Williams who failed to spark a tiring midfield into life in his 15 odd minutes on the pitch.

So that's how we saw it but how did you? Let us know in the comments section below, and vote for your man of the match.